A 25-year-old man with a weapon was shot and killed by an Ottawa police officer after a stabbing at the Island Park Metro Sunday night, and Ontario's police watchdog is investigating. 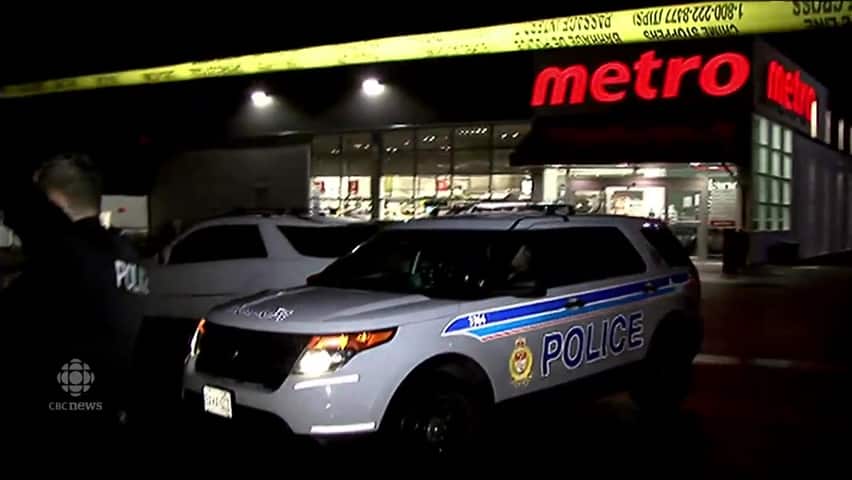 3 years agoVideo
0:23
A 25-year-old man was shot and killed by an Ottawa police officer near the Island Park Metro on Feb. 25, 2018, leading to an investigation by Ontario's police watchdog. 0:23

A 25-year-old man with a weapon was shot and killed by an Ottawa police officer after a stabbing at the Island Park Metro Sunday night, and Ontario's police watchdog is investigating.

At about 6:45 p.m., police were called to the Metro at the corner of Carleton Avenue and Wellington Street West to deal with reports of a man with a weapon.

Ottawa paramedics said a 49-year-old man suffered significant stabbing injuries and was taken to the Ottawa Hospital's Civic campus trauma unit, where he was listed in serious but stable condition.

Responding police officers found the suspect in an alley near the store and an "interaction" began, according to a news release from the Special Investigations Unit.

"One of the officers discharged a firearm multiple times" and struck the man, the SIU said. He was then taken to hospital, where he was pronounced dead.

At around 8:30 p.m., at least five Ottawa Police Service vehicles could be seen in the parking lot of the Metro grocery store. The parking lot was cordoned off with police tape, and police had also blocked off the intersection of Spencer Street and Western Avenue.

The SIU confirmed shortly before 10 p.m. that someone had died and they were taking over the investigation.

The SIU is an arm's-length agency that investigates incidents involving police in which someone is killed, injured or alleges a sexual assault.

Anyone with information about the incident is asked to call the lead investigator at 1-800-787-8529. Video can also be uploaded through the SIU's website.