Their growing flock needed a place to graze. The solar energy operation down the road needed to keep vegetation from creeping over its panels. Sheep farmers Chris Moore and Lyndsey Smith saw a win-win opportunity, and they leapt at it. 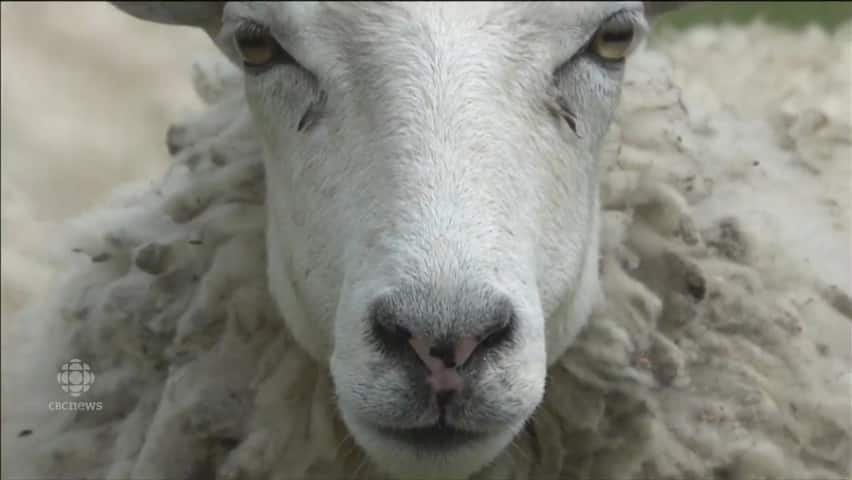 1 year ago
1:12
Chris Moore and Lyndsey Smith (and their 400 sheep) have a "vegetation abatement" contract with EDF Renewables, which runs a solar farm on Galetta Side Road. 1:12

Chris Moore and Lyndsey Smith were looking to expand their grass-fed, pasture-raised sheep operation, the Shady Creek Lamb Company, but their 40-hectare family farm in Kinburn didn't have the space.

Then one day, the couple was driving past a sprawling solar installation on Galetta Side Road when they saw a mutual opportunity: all that grass growing between the panels needed mowing, and their sheep needed a place to graze.

It's a power station, really. We feel like we're bringing the farm back to it.- Lyndsey Smith

"I quite literally Googled what company was running the site, and I called them. I just said, 'We're around the corner [and] we've got some sheep. What do you think? And within a couple of weeks we had a pilot project up and running," said Smith, 40.

Every couple days, Moore and Smith move the animals from one patch of grass to the next. The sheep munch on tall grasses, weeds, Manitoba maple alders, vines and raspberry canes — unwanted vegetation with the potential to block sunlight or cause damage to the solar panels.

"Shade is the enemy of a solar site, so we keep the plants from growing up in front of the panels and shading [them]," Smith said.

The solar company also lets them mow a "first cut," which serves as feed for the flock over the winter. The sheep do the rest, leaving a smaller carbon footprint and virtually eliminating the need for herbicides.

A trio of guard dogs protect the flock from predators such as coyotes, while the couple's herding dog, Dash, a blue heeler/border collie mix, helps shift the sheep from one patch to the next.

The flock includes Border Cheviots, Romanovs and a Coopworth mixes, breeds known for easy birthing and forging strong bonds between mother and lamb. The family farm is 10 kilometres away, so the "solar ewes" must be hardy and independent.

The symbiotic partnership helps EDF Renewables power 7,000 homes, according to the company's website.

It has also allowed the Shady Creek Lamb Company to expand without the crippling cost of buying land within Ottawa city limits. There's lots of competition for available land, said Moore, 37, and that drives up prices.

"There's a lot of corn and soybeans in the area — cash croppers. We have pressure from urban sprawl, which is huge. Dairy farmers are always competing for farmland. Speculators, developers, [and] foreign investors," he said.

"Now, we can grow food and fibre, and they still produce electricity."

Before, Smith never used the term "solar farm," because she didn't see the operations as farms at all.

"It's a power station, really. We feel like we're bringing the farm back to it," she said. "[Locals] were really pleased to see sheep and livestock back on this land."