SNC-Lavalin won the $1.6-billion contract to extend and maintain Ottawa's north-south LRT line even though it didn't achieve the minimum technical score to qualify for the project — a threshold its competitors met easily, CBC News has learned.

SNC-Lavalin won the $1.6-billion contract to extend and maintain Ottawa's north-south LRT line even though it didn't achieve the minimum technical score to qualify for the project — a threshold its competitors met easily, CBC News has learned.

The Montreal-based company beat out two other consortia to extend the Trillium Line from Greenboro into Riverside South, a decision cemented with a 19-3 vote by Ottawa city council on March 6.

However, sources with direct knowledge of the Stage 2 evaluation process told CBC that SNC-Lavalin failed to achieve the minimum technical score of 70 per cent, a requirement set out in publicly available documents.

CBC is not naming the three sources because they are not authorized to speak with the media.

SNC-Lavalin, currently at the centre of a major political controversy, is also one of the key partners in Rideau Transit Group, the consortium building the thrice-delayed first stage of Ottawa's LRT system.

The troubled company was one of three pre-qualified bidders for the extension of the Trillium Line. The other two — Trillium Link and Trillium Extension Alliance — scored well above the minimum technical grade of 70 per cent, according to CBC's sources.

City officials and their hired experts overseeing the procurement process have steadfastly refused to confirm whether SNC-Lavalin met the technical threshold.

When council debated and ultimately approved the spending for LRT Stage 2, which includes extending both the east-west Confederation Line and the north-south Trillium Line, Coun. Diane Deans asked if the winning bids had met the minimum 70 per cent score.

She was told the scores were commercially confidential. Deans replied she wasn't asking for the score, only to be assured the winning bids met the threshold. 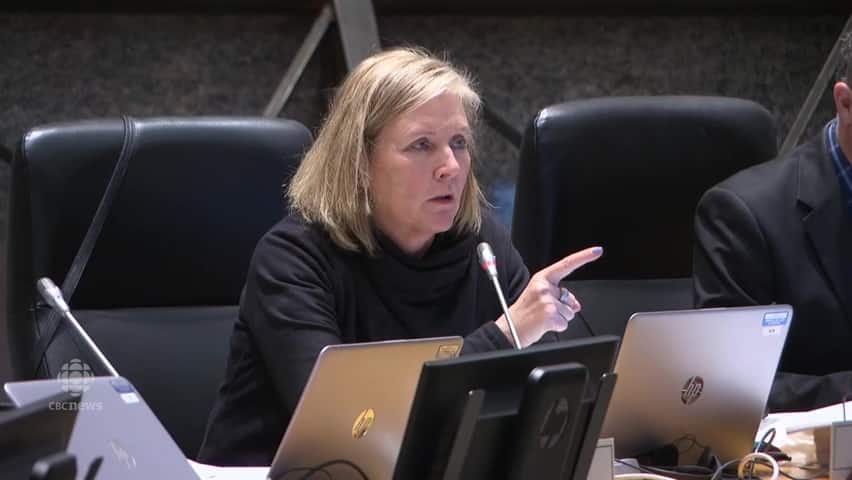 'I didn't get that simple answer'

Again this week, the city refused to say whether SNC-Lavalin made the minimum grade, citing commercial confidentiality of the process.

Given more than two business days to respond to inquiries, the city refused to provide an in-person interview, sending instead an email attributed to Chris Swail, the director of O-Train planning.

"The city stands by the overall integrity of the procurement process in no uncertain terms," according to Swail's statement.

The statement also says city officials "are all satisfied with the results" of the procurement process and in "the winning proponent's ability and capacity to design, build and maintain the Trillium Line extension."

SNC-Lavalin has built rail systems all over the world, including the award-winning Canada Line in Vancouver.

"We are very proud of the proposal we submitted and look forward to getting started," said an SNC-Lavalin spokesperson in an email.

The engineering and construction giant said it has no knowledge of the breakdown of the score as the process is confidential.

How the bids were evaluated

According to the statement from Swail, the three technical proposals were reviewed by a team of experts for "completeness" and "conformance" to make sure the submissions met the requirements of the contract.

In order to receive a passing score, a technical score threshold of 70 per cent for each of the criteria was required.- City of Ottawa report

But these "completeness" and "conformance" reviews are not the same as the technical scoring, and in fact were conducted before the bids were scored for their technical merit.

The technical evaluation for the shortlisted bids occurred in two stages, according to public city documents.

Individual expert evaluators reviewed and scored the submitted bids for the Trillium Line on a number of criteria including project design, engineering and operations.

"In order to receive a passing score, a technical score threshold of 70 per cent for each of the criteria was required," states a city report.

The evaluators then came together to decide on a so-called "consensus" score out of a maximum of 500 points.

It is common in procurement processes that a bid that doesn't make the technical grade be disqualified and barred from the financial evaluation round. This week, the city would not say whether this was the case with the LRT Stage 2 procurement.

But Swail did appear to confirm it earlier this month.

At the March 6 council meeting, Deans asked specifically about the process: "Pre-qualification, followed by technical scoring, and then if you passed the 70 per cent threshold, you went onto financial assessment. Is that correct?"

Swail answered: "That is correct."

The financial evaluation also consisted of several stages, and the resulting consensus score was also out of a maximum of 500 points.

The technical and financial scores were then combined to produce a "final ranking."

SNC-Lavalin said it was told by the city that it was the preferred proponent, "which means that our total score placed us first." It is possible that a bid could have the overall highest score, but still not have met the 70 per cent minimum technical threshold.

The bid evaluation steering committee oversaw this whole evaluation process, but no one knows who these people are — the membership of the committee is secret.

The steering committee presented the final technical and financial scores, as well as the overall rankings, to an executive steering committee comprised of the city's most senior staff including the city manager, the city solicitor, the treasurer and the head of OC Transpo.

It's the executive steering committee that recommended the preferred proponent to council, which ultimately had the final say on whether to approve SNC-Lavalin for the Trillium contract. But council made that decision without knowing whether the company met the minimum technical score.

According to Norton Rose Fulbright lawyer Geoffrey Gilbert, "council is not supposed to verify whether … proponents met the technical score. It's council's job to take all the recommendations on the preferred proponent, assess that and make their decision."

That SNC-Lavalin failed to meet the minimum technical grade raises a number of issues.

First, how did the company make it through to the financial evaluation round?

Asked if there are provisions in the request for proposals that would allow a bidder to win without earning a 70 per cent grade, the city wouldn't explicitly say. Instead, Swail's statement repeats the argument that "specific details that are commercially sensitive or relate to proponent evaluations are kept confidential to protect the integrity of the bidding process and its results."

Norton Rose Fulbright lawyers also cite confidentiality as the reason for refusing to confirm whether SNC-Lavalin met the minimum technical score. But Swail has spoken a number of times about the Montreal company's financial score.

"They were by far the lowest bid," Swail said last month of SNC-Lavalin's proposal. He's also said SNC-Lavalin was the only proponent to come in under the city's price target.

While SNC-Lavalin's bid will cost the city $230 million more in the short term than planned, the company promises to save the city $100 million over its 27-year maintenance contract.

The contract is not yet signed and SNC-Lavalin's bid expires at the end of the month.