An Ottawa man with a rare genetic disorder is calling on the province to fund a drug he believes could save his life — and possibly even allow him to walk again.

At more than $700K for 1st year, Spinraza simply isn't an option for most adults with spinal muscular atrophy

An Ottawa man with a rare genetic disorder is calling on the province to fund a drug he believes could save his life — and possibly even allow him to walk again.

Kyle Vezzaro, 31, has spinal muscular atrophy, or SMA, a rare genetic disorder that causes chronic wasting of the muscles. The condition can be deadly in its acute form, with many Type 1 patients dying before their second birthday.

They've basically decided who gets to become cured and who doesn't.- Kyle Vezzaro

Vezzaro has Type 2, which progresses more slowly. He was diagnosed at four, and by the time he was 10, he was using an electric wheelchair to get around.

Still, he never let go of his childhood dream of becoming a jet fighter pilot.

When he was a teenager, The Make-A-Wish Foundation organized a visit to CFB Bagotville with the promise of a flight in a CF-18, but at the last minute the crew deemed the flight too risky because the pilot wouldn't be able to assist Vezzaro out of the cockpit in the event of an emergency.

Now, a new drug called Spinraza is giving SMA sufferers like Vezzaro hope that they might one day walk — or even fly  — again.

"When I heard about [Spinraza], it was shocking. I literally called my doctor the next day and said, 'I want to get on the trial,'" he said.

But unfortunately for Vezzaro and many other SMA patients, Spinraza, manufactured by U.S.-based Biogen, has also become one of the world's most expensive drugs, with a stratospheric price tag of $708,000 for the first year of treatment, and $354,000 for each year thereafter. 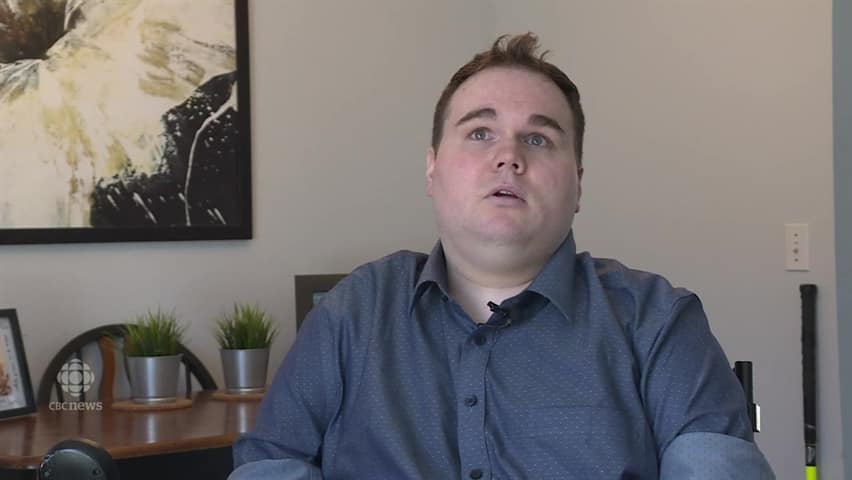 Drug price out of reach for Ottawa man

Ontario's Ministry of Health covers SMA treatment only for children under 12 who have Type 1, whereas Quebec funds Spinraza for patients of all ages.

In a statement to CBC, a spokesperson for Ontario's Ministry of Health and Long-Term Care said "the ministry understands that Spinal Muscular Atrophy can affect people of all ages and we believe the funding of Spinraza for Type 1 patients is a positive step in the right direction."

The Canadian Agency for Drugs and Technologies in Health (CADTH), which advises all provinces except Quebec on drug funding, told CBC its recommendation to fund Spinraza only for patients diagnosed before they reach the age of 12 is based on clinical studies.

"Evidence for patients older than 12 years of age was limited to small, uncontrolled studies … that were insufficient for the expert committee to conclude that treatment with Spinraza provides a clinically meaningful benefit," the agency said.

Quebec, which has its own agency that advises on drug funding, now pays for Spinraza for both adults and children.

Dr. Alex MacKenzie, a pioneer in the treatment of SMA at CHEO, Ottawa's children's hospital, said despite the lack of clinical evidence pointing toward Spinraza's benefits among patients over 12, adult sufferers deserve access to Spinraza, too.

"I think as Canadians they deserve the therapy," MacKenzie said.

Vezzaro believes Ontario has based its funding decision on cost alone.

"They've basically decided who gets to become cured and who doesn't," he said. "Can you actually put a price on a life?"

Moving to Quebec is an option he has considered, but Vezzaro said he'd lose his subsidized apartment with its special wheelchair accommodations.

With treatment just out of reach, Vezzaro knows his dream of one day serving in the Canadian military will have to remain just that — a dream.

"If I could walk again, I would sign up tomorrow."