A Somali-Canadian Ottawa man with mental health issues who was taken to hospital in critical condition on Sunday after police tried to arrest him has died from his injuries, his family said Monday. 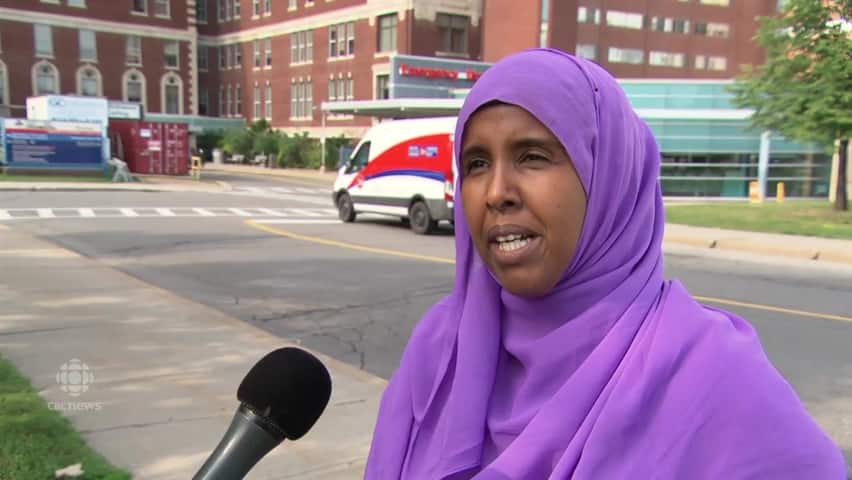 A Somali-Canadian Ottawa man with mental health issues who was taken to hospital in critical condition on Sunday after police tried to arrest him has died from his injuries, his family said Monday.

Abdirahman Abdi, 37, had been on life support at the Ottawa Hospital's Civic Campus since the incident Sunday morning.​

Ontario's police watchdog, the Special Investigations Unit, confirmed Abdi's death. The SIU investigates whenever there is a death, serious injury or allegation of sexual assault involving police in the province. It has assigned five investigators and one forensic investigator to the case.

The SIU says at around 9:30 a.m. on Sunday officers with the Ottawa Police Service were called to Wellington Street West and Fairmont Avenue, in downtown Ottawa, for reports of a man allegedly groping people at a coffee shop.

Police found a 37-year-old man, and shortly afterwards there was a "confrontation" outside the Hilda Street building, a few blocks away, according to the SIU.

The SIU has identified two officers as the subjects of their investigation and five officers as witnesses.

Family and neighbours of Abdi told CBC News he had a "mental capacity issue" and "mental health issues" but said he was a gentle soul.

'I've never seen something like that in my life'

Abdi's brother Abdirizaq Abdi told CBC News on Sunday that he was on the eighth floor of his building when a neighbour yelled that police were arresting his brother Abdirahman.

"I heard the screaming, and then I come out and I see my brother lying down, police hitting so badly. Like, I've never seen something like that in my life," Abdi said.

"All of them, they were on top of him. He was under [them] ... they were hitting like [he was] an enemy. I've never seen something like that."

Nimao Ali witnessed the incident and said she thought it should have been handled differently.

"All the blood that he lost could have been saved for a matter of just really taking this calmly. Because everybody in the [neighbourhood knows him] and we never felt threatened by him," she said.

Ali, acting as the spokesperson for the family, said Monday that doctors told them Abdi had already been dead 45 minutes before he arrived into their care. He was officially pronounced dead at 3:17 p.m. Monday.

"The focus of the family now is to get ready for funeral services and deal with everything else as time comes," she said.

Ottawa Police Chief Charles Bordeleau said the SIU investigation limited what he could say about the incident and the kind of contact police could have with the family. But he offered his condolences upon learning of Abdi's death.

"It is very difficult to the family, the community and our officers," he said.

"We need to let the SIU do their investigation and determine exactly what took place, but we've reached out to the family through the SIU to [offer our] support."

Prior to learning of Abdi's death, Bordeleau confirmed there were multiple reports of a suspect assaulting people and stressed that his officers have a difficult job and that he supports them as their chief.

He said his officers were working alongside community partners such as the Ottawa Community Immigrant Services Organization and have reached out to Somali leaders, but added police are limited in how much community outreach they can do given the SIU investigation.

Union president Matt Skof, speaking earlier in the day Monday, called the incident a "difficult scenario" for the officers to deal with.

"What was presented to the officer was ... assaultive behaviour, and it's a very difficult scenario for the officers to deal with — and unfortunately, as a result of it, there was physical altercation," he said.

Skof said he didn't know whether the responding officers knew Abdi had any mental health issues but said that in the moment, that would not have mattered.

"It doesn't really in any way change the decision that you are going to have to make to ensure public safety," said Skof. "The officers are confronted with violence, they have to deal with it to prevent more injuries to the members of the public, to the subject or suspect themselves, as well as the officers."