Days after a "Black Lives Matter" message on a legal graffiti in Ottawa wall was defaced, artists created a tribute to Sandra Bland in response. But it didn't take long for it to be defaced too.

Tribute was defaced Monday with "All Lives Matter," but was fixed overnight 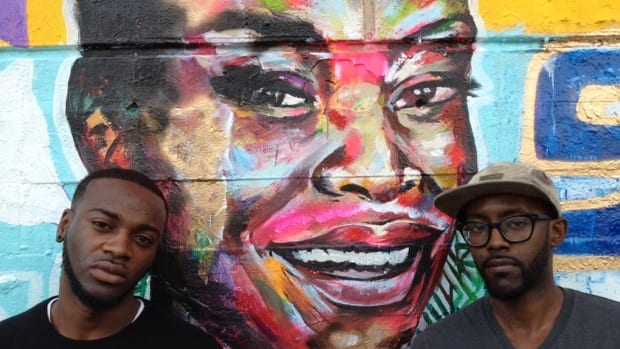 5 years ago
1:52
The creators of a graffiti mural honouring Sandra Bland are upset about a tag of "All Lives Matter." 1:52

Days after a "Black Lives Matter" message on a legal graffiti in Ottawa wall was defaced, artists created a tribute to Sandra Bland in response. But it didn't take long for it to be defaced too.

Bland was a black woman who officials say committed suicide in a Texas jail earlier this month after being arrested during a traffic stop.

The tribute was painted by artists Kalkidan Assefa and Allan Andre, and they spoke to Ottawa Morning's Hallie Cotnam on Tuesday about what inspired them.

Earlier this July, representatives of the Ottawa groups BlakCollectiv, Black Lives Matter Ottawa and others gathered at the tech wall — a legal graffiti wall off Slater Street near Bronson Avenue — to paint the words "Black Lives Matter" on a large whitewashed section of the wall.

Within hours, the original minimalist mural was defaced.

"My understanding is there was a certain sense of [territory] with this wall," Assefa told Ottawa Morning on Tuesday. "The longtime artists and writers that come here felt that maybe people should have asked them for permission or asked to collaborate in order to get the message out rather than take the space up.

Assefa and Andre decided to respond to the defacement with a graffiti tribute to Bland.

"I really wanted it to be a celebration of her life and her spirit," Andre said.

But their tribute was defaced Monday with a white moustache, the words "All Lives Matter" and other offensive language painted in white over Bland's name and elsewhere on the portrait.

Carling Miller went to look at the mural with a friend late Monday night and noticed the defacement. They decided to watch over it until Black Lives Matter was able to send people to fix the mural.

"I was — I still am — I was livid when I initially came on it, and I expressed my displeasure to the men who were pacing back and forth and kept sort of watching us from afar," Miller said.

"It's something bigger than I am and it's also something that directly affects me as a black woman, and I just feel protective over it and the people who did it, and her spirit. So it was incredibly painful to see that that is the response that the mural got, that it wasn't just covered over, that someone intentionally was trying to destroy [the mural] and hurt the people who created the mural. And I think it was a blatant attack on black folks just in general."

'We do not support this'

Cassandra Dickie, the graffiti and visual arts co-ordinator with the Ottawa group House of Paint, said she believes the tags defacing the mural were not done by a graffiti artist.

Dickie also said she was saddened by the defacement.

"The reaction by everyone I know and I'm in contact with — and I know almost everyone in the city that writes graffiti — was absolute outrage," Dickie said.

"We do not support this kind of disrespectful act."

The space is public and it is legal to tag over top of a mural, but Dickie said there are "unwritten rules" in the graffiti community to respect the artist who painted beforehand.