The Royal Ontario Museum is asking the public for help finding fragments of a meteorite that entered the earth's atmosphere Wednesday morning over Bancroft, Ont.

The Royal Ontario Museum is asking the public for help finding fragments of a meteorite that entered the earth's atmosphere Wednesday morning over Bancroft, Ont.

Kim Tait, a professor of geology and curator of mineralogy at the ROM, told CBC's All In A Day that meteorites normally burn up completely before reaching the earth's surface. But, under the right conditions, fragments can survive, and sometimes be found.

"That's where I get excited, because I want those rocks," Tait said.

She said the meteorite most likely came from the asteroid belt between Mars and Jupiter — rocks that remain in orbit until one gets knocked toward Earth's gravitational pull.

Difficult to find, but not impossible

Since 70 per cent of the Earth is water, most meteorites hit an ocean, never to be retrieved, Tait said.

"So those ones are out right away. And even if we know exactly where they fell, it's incredibly hard to identify a meteorite versus just a normal rock that you would see on the ground. So it does get a little questionable."

But there's still a way to identify them.

Tait said the first indicator is their black, glassy exterior.

"If it has some roughs on it, or it looks grey or looks like something you've seen on your driveway, probably not a meteorite."

She said the second biggest indicator is that it's magnetic. Tait suggested using a fridge magnet to test a rock's pull.

"Once you've kind of passed those two identifiers, then you can definitely send me a picture of what you've found, and I'd be happy to look at it," she said. 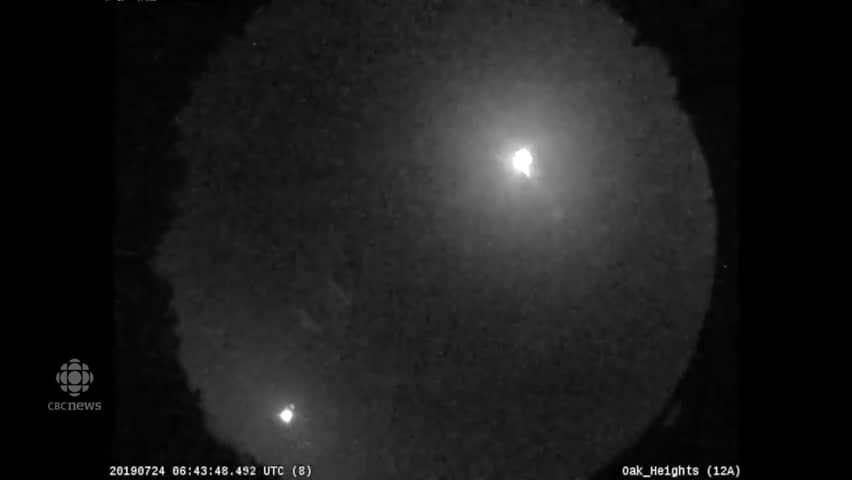 1 year ago
0:16
Researchers believe fragments may have come down to the ground around Bancroft, Ont., after a meteor came down to earth near there. 0:16

If you find one, don't worry: meteorites are safe to touch, Tait said.

"Even if you see it fall in front of you and touched it, it's just the very outer surface that is burning up, so it wouldn't even be hot."

While finding a fragment won't make you rich, they're priceless to scientists because of the information they hold about outer space.

The ROM periodically holds rock, gem, mineral, fossil, and meteorite identification clinics at the museum. The next one is scheduled for Aug. 21.

CBC Radio's All In A Day