About to be homeless, and helpless to stop it

A woman with multiple sclerosis who expects to be homeless within days says the city is refusing to help until she's actually on the street.

A woman with multiple sclerosis who expects to be homeless within days says the city is refusing to help until she's actually on the street.

"I can't believe I have to literally be in this position before I can get any help from my government," said Bobbi Assoun, a 47-year-old woman CBC recently spoke to about the challenges of paying for medical cannabis.

Assoun, who uses a wheelchair and suffers from chronic pain related to her MS, has been unable to work for several years and relies entirely on income from the Ontario Disability Support Program (ODSP).

In mid-May, she said her teenage daughter moved out of their apartment, triggering an immediate $482 cut to Assoun's monthly ODSP benefit. Her ex-spouse also ceased child support payments at that point, she said.

The cut has left Assoun in what she describes as a crisis. She's no longer able to afford $1,146 a month for rent, and even with help from a social worker and a housing agency, she hasn't found a new apartment to accommodate her reduced monthly income of $1,401.

Her ODSP case worker has told her no other support is available through the program, Assoun said.

Assoun's lease ends July 31. She said the city agreed to pay for movers to pack up her home this Friday and to put her things in storage for three months, but advised her that's all they can do until moving day.

"I was advised by this clerk at the City of Ottawa to call 311 after 4 o'clock — I don't know why after 4 o'clock — and they will find me a place to go," Assoun said, adding she's clueless about what kind of shelter might be found at that point or how long it might last.

Assoun had hoped to avoid such an emergency when she applied for a spot in social housing six years ago, immediately after moving with her daughter to Ottawa from the Toronto area.

While waiting for something suitable, she's been paying market rent and moving frequently. Initially, Assoun said she and her daughter tried sharing accommodation with roommates to cut costs, but it didn't work well for them.

Assoun concedes she might have been placed in social housing earlier if she'd declared herself open to more options. She restricted her choices to nearby neighbourhoods to avoid uprooting her daughter.

In 2013, she also rejected a spot in Ottawa Community Housing after viewing it with her daughter.

"By the time we got back to the vehicle, she was crying," Assoun said. "She was begging me, 'Mom, I know the rent is what you want to pay, but I can't live there, I don't feel safe.'"

Applicants to Ottawa's social housing registry are permitted to turn down offers but are removed from the waitlist after the third rejection. Assoun resolved to continue paying market rent in the hope that something better might come up, but that hasn't happened.

After her benefit reduction, Assoun said she informed the registry office and was told her only option was to adjust her file to declare herself open to more units across the city.

While she's checked off more options, she's held back on some for fear of being placed in an unsafe, unsuitable unit where she's likely to be stuck for life.

"Once you're housed, you're no longer the city or the government's concern," Assoun said. "I just want to pick the place where I want to live. I've lost everything." 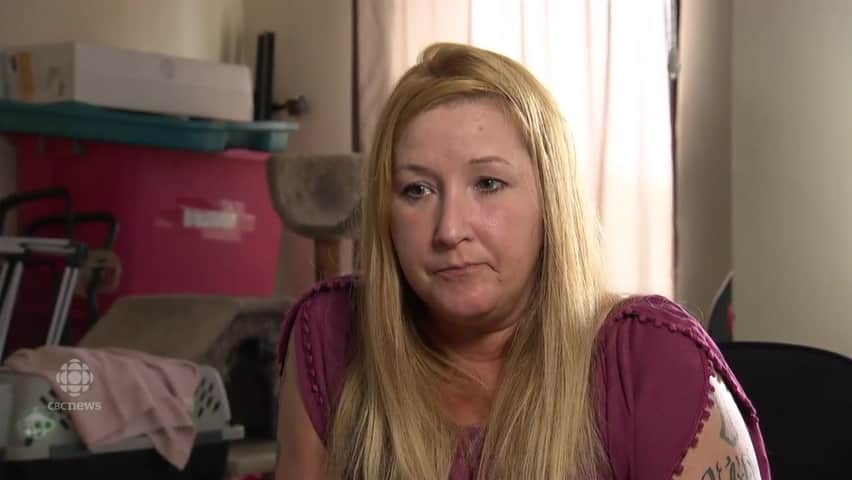 About to be homeless, and helpless to stop it

2 years ago
0:38
A woman severely disabled by multiple sclerosis who expects to be homeless within days says the city is refusing to help until she's actually on the street. 0:38

With possible homelessness just days away, Assoun has also turned to the MS clinic at the Ottawa Hospital for support.

A letter co-signed by a neurologist and a social worker at the clinic says "It is worth noting that significant life stressors such as those being faced presently by Ms. Assoun … have been shown to contribute to exacerbation of MS symptoms and relapses."

Assoun said she forwarded the letter to a worker at the city's social services department but received no response.

Ottawa's social housing registry also offers no priority treatment for medical conditions, except those that are "life-threatening" and "made worse by the current housing situation." Others who qualify to move up the waitlist include people fleeing domestic abuse and who are currently homeless.

Some information shared ahead of homelessness, city says

​Marion Connolly, a program manager for community and family shelters at the city, said she hoped Assoun would contact her personally to discuss her experience.

She said that while it's true people are not assigned space in shelters before losing their housing, there's no policy requiring them to wait for eviction for details about the shelters and how their needs could be met.

"We absolutely would share information ahead of time and give people a picture, let them know what is available," Connolly said.

The city does advertise housing allowances of $250/month for single people in need, but according to its website, it's only available for those in the most dire circumstances, such as "people who have been homeless for a long time and living in emergency shelters for months or years."

Connolly confirmed the city has no program to temporarily subsidize rent for a person who's taken a sudden hit to their income and needs time to find a cheaper place.

"This kind of situation happens quite frequently, where people who are on disability pensions and their funding is just not sufficient to cover the housing cost in cities like Ottawa," said Tim Aubry, a University of Ottawa psychology professor who has studied homelessness.

For several years, Aubry said, governments have focused on lifting up the chronically homeless, in part because of their heavy dependance on health and social services. Yet tools such as rent subsidies to prevent homelessness are also crucial, both to save money in the long run and to spare people the extreme stress of losing their homes.

Assoun's story also highlights the need to improve the quality and quantity of social housing as part of efforts to prevent homelessness, Aubry said.