A woman from Ottawa has organized an international demonstration inspired by Tenors member Remigio Pereira's controversial stunt at the MLB All-Star Game.

A woman from Ottawa has organized an international demonstration inspired by Tenors member Remigio Pereira's controversial stunt at the MLB All-Star Game.

Pereira altered the lyrics of O Canada and held up a sign that read "all lives matter" on one side and "united we stand" on the other. The statement is a controversial response to the Black Lives Matter movement, which campaigns against racism and police brutality directed toward the black community. 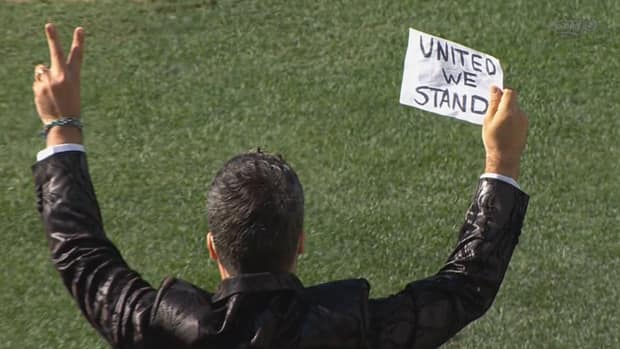 National anthem lyrics changed to 'all lives matter,' Remigio Pereira gets the blame

5 years ago
1:03
National anthem lyrics changed to 'all lives matter,' Remigio Pereira gets the blame 1:03

In response, Alicia-Marie LeJour has organized a United We Stand demonstration for Sunday that she says builds on the Black Lives Matter movement's message.

Demonstrations are planned in cities across Canada including Toronto, Regina, Vancouver and Calgary. There are also events happening in numerous U.S. cities including Washington, Chicago, Sacramento, Calif., and Wilmington, N.C.

"I've reached out personally to my friends across the United States and across Canada," said LeJour.  "Black lives are being murdered at alarming rates by the people who took an oath and were sworn in to protect us. We need this movement. We need to save our lives."

LeJour and her co-organizer R.J. Pate said they want to build on the success of the Black Lives Matter rally they organized in Ottawa on July 11 outside U.S. embassy.

"We had 500 people. I haven't seen those numbers since the Mike Brown vigil that happened in 2014," said Pate.

LeJour added that while recent headlines have focused on the deaths of black Americans, Canada is not without its problems.

Both LeJour and Pate said the Black Lives Matter movement is about bringing attention to the plight of their community, not alienating non-blacks.

"It's a matter of focus, not exclusion, " said Pate.

Added LeJour, "There is no racism on my behalf. There is no exclusion. I'm simply fighting for my people. I'm fighting for my family. And if there was something happening large scale against my white family I would be doing the exact same thing."

"We are literally begging [police] to stop killing us," said LeJour.

"'All lives matter is a big 'but' over that. 'But had you put your hands up. But had you not reached for your wallet when you'd been requested to, you'd still be alive. But had you not been a 12 -year-old boy playing with a toy gun in a park you would still be alive.' But, but, but. That's what All Lives Matter is. It's silencing our fight for our lives and it's very unfair to us."