The plant that processes Ottawa's residential recycling receives thousands of non-recyclable items every day, prompting calls for the city to help homeowners get with the program.

A doll's severed arm. Christmas lights. Even a kitchen sink. None of them recyclable, yet all chucked into Ottawa's blue bins.

Cascades Recovery, the company that processes the city's recycling, believes we can do better.

"You can go onto the City of Ottawa recycling website and find out exactly what's recoverable," said Dan Stone, the site's general manager. "And whatever is not on that list, there's no point in sending it here because it's going to end up in the landfill."

The problem, according to people who understand the industry, is that most residents don't bother to do that.

The group is calling on the next council to triple spending on awareness campaigns — Ottawa currently spends about 50 cents per household, while other municipalities commit three times that —​ to make sure people understand what can be recycled, and what can't.

Bury points to the city's poor recycling rate as another reason to improve awareness. The more recyclable material that's diverted from the garbage stream, the longer the Trail Road landfill site will last. At the current rate, it will be full by the mid-2040s.

Ottawa has one of the lowest residential waste diversion rates among large cities, at just under 44 per cent.

"Leading municipalities are actually doing over 60 per cent, and the average is close to 50," Bury said.

"We're the bottom of the big 10 municipalities in the province, and that's a performance which we should not be proud of."

Toronto beat Ottawa's recycling rate by seven percentage points in 2016, but those numbers may not tell the full story.

Ottawa is unique in Ontario in providing blue and black box recycling to all apartment buildings, where recycling rates are traditionally lower. That's watering down the stats, according to the city's director of solid waste services.

"Unfortunately, the diversion in those buildings is not the same as what it is in a single family home," said Marilyn Journeaux.

In single family homes, 50 per cent of waste is diverted from landfill, but in Ottawa's apartment buildings the rate is just 17 per cent.

"We all have the ability to divert over 70 per cent of our waste," Journeaux said. "The challenge is how to move [residents] toward that target."

Ottawa does have one big plus in its favour. Our recyclables are relatively pure.

The contamination rate of Ottawa's recycling is only three per cent — in Toronto it's a whopping 25. That means a quarter of Toronto's recycling has been tainted and is unable to be sold after it's processed.

Ottawa provides residents with separate black and blue boxes, while other municipalities including Toronto and Gatineau have one large bin where all recyclables — glass, paper, tins and plastic — are dumped together. But when tiny shards of broken glass get mixed in with newspaper, that paper is ruined and likely headed to the landfill.

Having a low contamination rate is critical, not just to keep waste out of the landfill, but also because it makes Ottawa's recyclables more marketable. 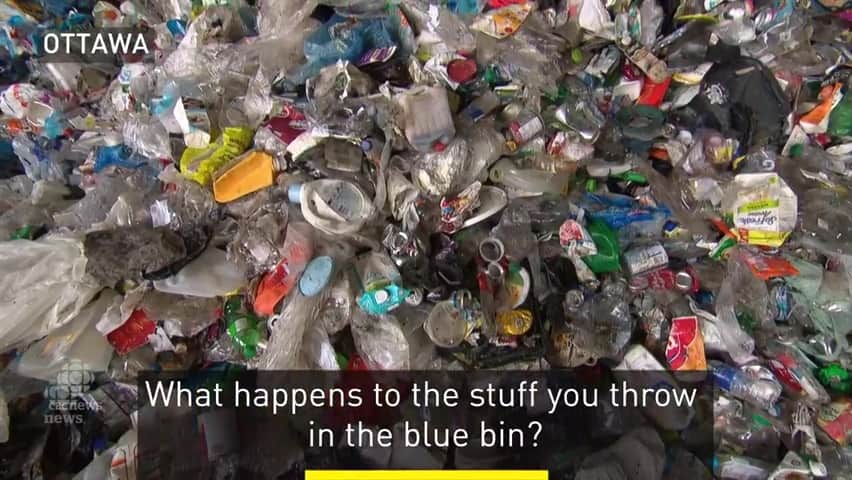 Ever wonder what happens to your recycling?

2 years ago
0:47
Less than half of Ottawa's garbage ends up in the recycling — and some of the stuff we put in the blue box doesn't belong there. 0:47

Since China banned mixed fibres and plastics, some municipalities in North America are scrambling to find markets where they can sell their recycling. Some are storing it and waiting for the markets to bounce back, while others are simply dumping it in the garbage.

"We have heard that some jurisdictions are actually landfilling," said Jo-Anne St. Godard, executive director of the Recycling Council of Ontario.

Ottawa does not put any of its recycled plastic into landfill, says Cascades Recovery's Dan Stone.

"The markets that we ship to are sustainable, and the homeowner in Ottawa can be confident that the material is, in fact, being recovered,."

Soon all municipalities in Ontario could share the same system.

The previous Liberal government mandated that industry take over the full cost of Ontario's recycling programs, up from the 50 per cent it funds now. Municipalities are currently waiting to see if the new PC government will continue with the Waste Free Ontario Act.

Not only would the legislation free up $130 million that taxpayers are currently shelling out to fund recycling programs, but it could also encourage industry to stop using packaging that recycling plants can't process.

"Municipalities haven't been able to deal with the wide range of packaging that's coming on to the marketplace," said St. Godard. "Packaging changes on a dime, more quickly than the commodity markets of the recycling systems can adapt to them."

The city of Ottawa believes the new law, if it comes into force, could be a game changer.

"A lot of municipalities are very supportive of what the previous government was proposing because it's really putting the onus on the producers and importers of packaging material to ensure that that material would be recyclable." Journeaux said.