'A momentous event': Rare plant set to bloom for 1st time — and then die

The Queen Victoria agave at Carleton University is due to bloom any day now, for the first and last time in its roughly 30-year lifespan.

It's an event that literally happens once in a lifetime.

The Queen Victoria agave at Carleton University is due to bloom any day now — for the first and last time in its roughly 30-year life.

"It's rare to have one," said Edward Bruggink, manager of the university's greenhouse. "It comes from Mexico. It flowers once in its lifetime, then it dies completely."

The gardener said it's hard to estimate the plant's exact age, with some living up to 50 years before flowering.

But Bruggink has worked at the school since 1981 and feels comfortable saying the desert-dwelling plant is at least three decades old. 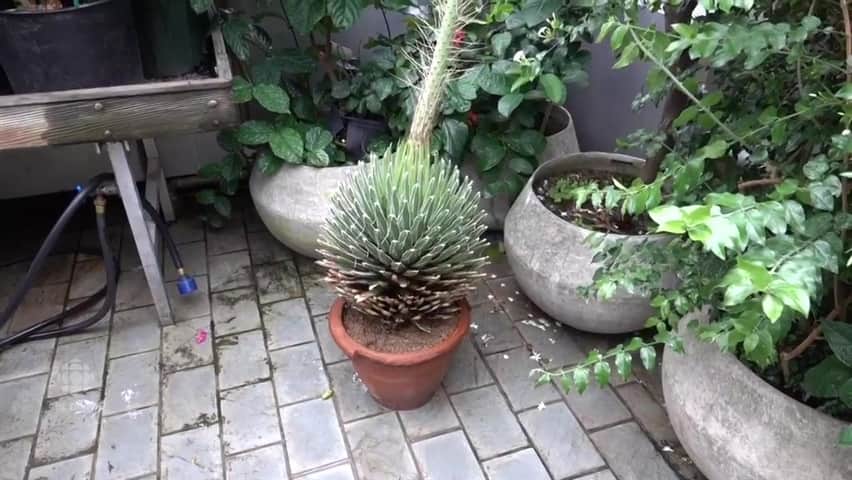 1 year agoVideo
0:33
The Queen Victoria agave at Carleton University is expected to bloom any day now for the only time in its 30-year life. 0:33

It's also unknown exactly how the school came into possession of the agave, which is uncommon in Canada.

Many of the greenhouse's flora were inherited from Expo 67 in Montreal, but Bruggink can't say for certain whether it came from that year's world fair.

He said Queen Victoria agaves often bloom when under stress. Construction in the biology building over the summer meant the agave was moved several times, which possibly triggered its life-ending flowering.

Regardless, Bruggink said interest in the short, stubby cactus relative has shot up ever since it began preparing to bloom.

"I've looked at this plant for years, decades, and watered it and didn't think much of it — until it started doing this," he said. "Now it's a phenomenon. And it's in my lifetime. I get to see it."

And the plant's popularity isn't the only thing that has shot up.

As it prepares for the end of its lifecycle, it has been growing a tall stalk that nearly reaches the ceiling of the greenhouse. Bruggink said the stalk wasn't there two months ago and grew more than 30 centimetres in one weekend.

"The whole plant in the bottom is dead," Bruggink said. "It's taking all the energy from the bottom of the plant to do this."

While the plant hasn't bloomed just yet, Bruggink said it will put on a show before its death.

"It will start blooming at the bottom and work its way up," he said, pointing at flower buds on the stalk. "It's just like fireworks going off. It explodes, one by one."

The tall stalk will then bow down, as if for a final ovation, before dropping its seeds and starting the cycle anew.

Plant's death will be 'something very special'

The bloom will overlap directly with the 20th anniversary of the university's popular butterfly show, which means many visitors will get to see it occur.

"It's a momentous event from a plant-enthusiast perspective," said Martha Mullally, an instructor in the biology department.

Mullally said she can only speculate why the plant has such a dramatic death.

By raising its seeds so high off the ground, it's possible the plant is allowing them to be blown further away, giving future plants a greater chance to spread out and survive, she said.

Bruggink said he'll plant this agave's seeds, hoping the next generation will benefit from the fruits of his labour.

He said he wants people to experience what he did when he recognized the plant was ready to die.