A bright fireball astronomers say was very likely a meteor streaked across the early morning sky over Ottawa Monday, captivating those awake early enough to witness it.

'It was like standing on Parliament Hill and watching the fireworks. That's how close it was'

A bright fireball astronomers say was very likely a meteor streaked across the early morning sky over Ottawa Monday, captivating those awake early enough to witness it.

Mary Dallimore was driving north along the Airport Parkway just before 6 a.m. after dropping her husband off at the airport when she saw it.

"There were no cars in front of me, no cars coming at me, no cars behind me and I had a clear view of the sky. It wasn't there and then it was there. It happened so fast. I saw this bright, bright, bright light go in an arc over the city, and then it just disappeared as fast as it came," Dallimore said by phone later Monday morning.

"I've never seen anything like it. It was brilliant and I hope to see something like that again."

Researchers from Western University's Southern Ontario Meteor Network captured the image of the fireball streaking past one of its telescope cameras at 5:49 a.m. EST.

'It was so close'

The bright light flew low in the sky, but didn't appear to cross the horizon, Dallimore said.

"It was low over the horizon. It wasn't high at all. And it was just like a brilliant fireball, I guess. It was quite exquisite," she said.

"I figured it was a meteor right away. ... It didn't appear like anything man-made coming across the sky. And it was so close, or it appeared so close, it was like standing on Parliament Hill and watching the fireworks. That's how close it was. I thought it was terrific. 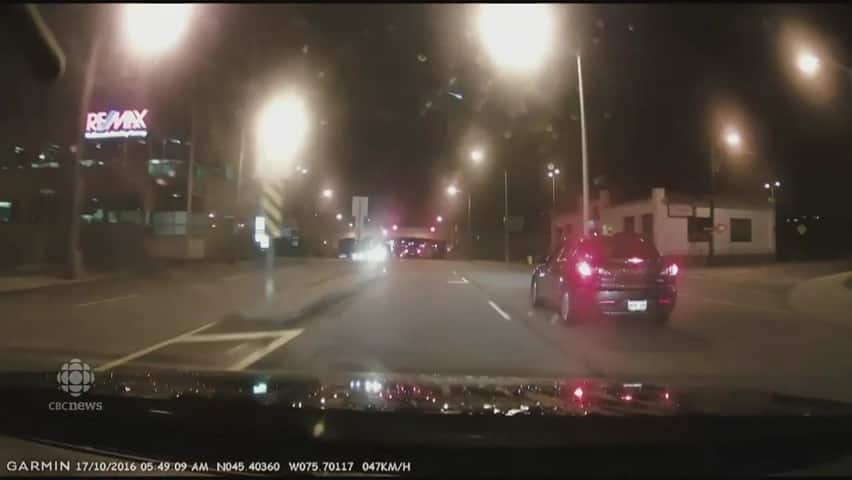 4 years agoVideo
0:17
Eugene Deery submitted this dashcam video of what he says was a meteor that shot through the sky early Monday morning. 0:17

Mike Hankey, the operations manager with the American Meteor Society, has seen both the Western video and video taken by another witness, and said it looks "like your standard fireball meteor."

Hankey said meteors travel at extremely high speeds when they enter the atmosphere.

"When it hits the atmosphere... it's almost like shooting a bullet into a pool of water, it immediately starts to decelerate, Hankey told Alan Neal on All in a Day.

"All of this friction is created, immediately we see all of this light and the energy is released as light, and probably 99.9 per cent of the time they just vaporize in the atmosphere and occasionally we are lucky enough to have them reach the surface of the earth as meteorites."

Hankey said with two videos, it might be possible to calculate both the speed and the orbit of the meteor, which should give astronomers a chance to determine whether the meteor was a fragment of an asteroid or from a more distant comet.

<a href="https://twitter.com/CBCOttawa">@CBCOttawa</a> I witnessed the meteor on my way to the pool.Saw it over the experimental farm, looked like you could reach out and grab it!

I just saw a massive fireball streak across the sky out in Orleans! <a href="https://twitter.com/RobynBresnahan">@RobynBresnahan</a>

<a href="https://twitter.com/CBCOttawa">@CBCOttawa</a> Yes, it was in the north west sky. I was coming from Almonte to the 417. Fairly bright, broke up as it got low. About 5:48am.