Ottawa police say they have found a second body part in a package as they investigate the delivery of a human foot to the Conservative Party of Canada's headquarters in downtown Ottawa. 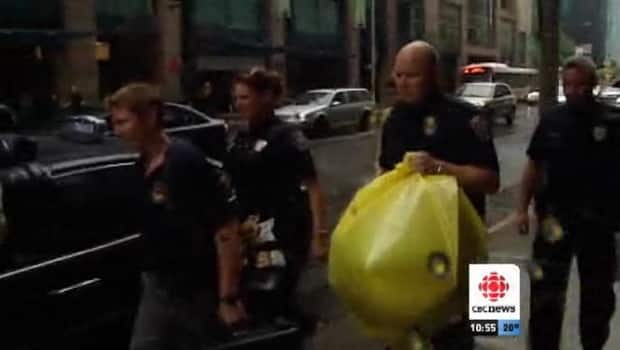 8 years ago
1:50
Police found a second body part after a foot was delivered to federal Conservative headquarters. 1:50

Ottawa police say they have found a second body part in a package as they investigate the delivery of a human foot to the Conservative Party of Canada's headquarters in downtown Ottawa.

Police would not say what the body part was, nor where it was found, though they did say it was not found at the Conservative Party offices on 130 Albert St. where the foot was sent.

Media reports said the second package, containing a human hand, was not addressed to the Tory headquarters. Police said the major crime unit continues to investigate.

Police were called to the building at 11:20 a.m. ET after a suspicious package was delivered there. Police called for the hazardous materials unit after they noticed what appeared to be blood on the package.

The Hazmat Unit and Emergency Operations Section inspected the package and determined that there was possibly a human foot in the box. A coroner later confirmed it was a human foot.

Major Crimes Staff Sgt. Bruce Pirt said the suspicious package was delivered through Canada Post and conceded it's possible it was sent as a "gruesome message."

The foot was decomposing and there was a stench when a CPC employee opened it, said Pirt. He would not say whether the foot belonged to a male or female.

Police found the second package in the course of the investigation, but would not reveal any more details.

Police are working with Canada Post to determine the origins of the packages and said they may also be in touch with morgues and funeral homes to see if they are missing any body parts.

Ottawa police are also checking to see if their case is connected with an RCMP investigation in Montreal after police there found a human torso in a pile of garbage in the Côte-des-Neiges borough.

Conservative Party spokesman Fred DeLorey said Ottawa police are investigating and all questions should be referred to them.

Several members of Parliament said they were caught off guard by the news.

"It's shocking for somebody to do that," said Labour Minister Lisa Raitt. "I'd hate to be the one opening that."