This little piggy has found a new home

One little piglet with a broken leg had his bacon saved this week thanks to the timely intervention of a passerby and a group of veterinarians.

One little piglet had his bacon saved this week thanks to the timely intervention of a passerby and a group of veterinarians.

Julia Wykes was driving down Highway 417 between Russell and Ottawa on Labour Day when she said she spotted what she thought was a bag.

"It took a second for my brain to process what I'd seen [and] it was actually a baby pig," Wykes said.

Wykes — who was with her three young kids at the time — decided to stop and turn around to pick up the piglet and put it in a blanket.

"He was terrified, he was covered in blood on one side of his body," Wykes said. "He had one leg that he was trying to kind of hobble on and it looked like really badly broken."

She decided to bring him home and call her friend, Tara da Costa, a veterinarian.

And the effort to save little piglet began.

Da Costa said when she first met the piglet at Wykes home, he was in pain and going in and out of consciousness. He had a fractured hind leg and a number of abrasions all over his body.

But he was still stable, she said.

"He'd obviously been tossed around, so either fell off a truck or hit by a car but potentially both," she said.

It's still not known if the pig fell out of a vehicle or how it was injured. 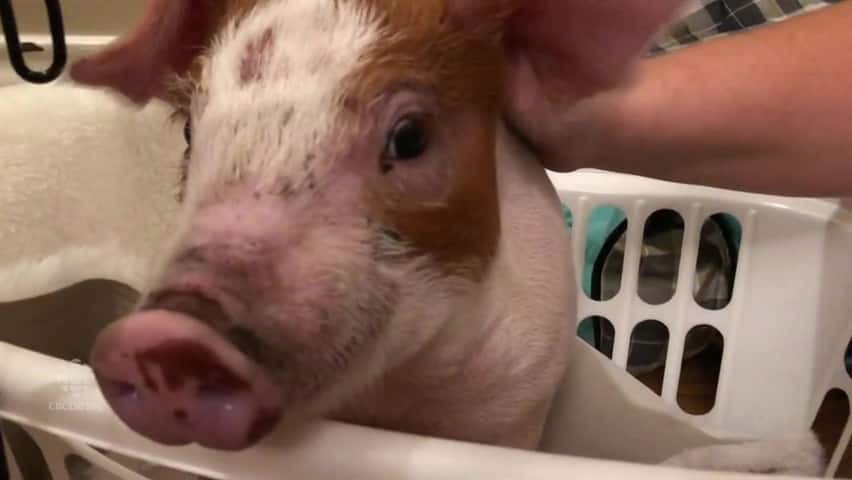 1 year ago
1:26
Julia Wykes was driving down Highway 417 when she found a piglet, now named Mango, injured on the side of the road. Veterinarian Charles Bruce says Mango should recover well after surgery for a broken leg. (Sept. 7, 2019) 1:26

Da Costa initially thought the piglet would have to be euthanized, but she quickly realized he was a fighter.

"He looked over me and said with his eyes like, 'Thank you'," she said, "I started having a change of heart about maybe giving him a second chance."

With the help of medication, food and some love and care over the week, the piglet showed signs of improvement.

"He started to come out of his shell and as he becomes more accustomed to human contact he recognizes us and you know he's actually quite affectionate and he's extremely feisty," said small animal veterinarian Lara Cohen of the Aylmer Veterinary Clinic in Quebec.

"He's a little tough dude," da Costa said. "He was basically dying on the side of the road alone and then showing us that he was a real fighter."

The band of vets

Da Costa and Cohen are co-parenting the little pig, who they've since named Mango, after the animal fell asleep with a piece of the fruit in his mouth.

"We don't often get the opportunity to have opportunities like this that are directly suited to our skill set," Slater said. "I had the availability to do it today and the stars aligned and I was able to take the time to hopefully make life better for this little piggy."

The vets believe Mango is as young as two months old, but aren't sure of his breed.

"He seems to be doing well... he's been fortunate to kind of transition from the herd to the home," Bruce said.

Bruce expects Mango to grow to full size. "Which is going to be huge, he'll be half a tonne," he said.

"The implants that we put in today should stay in for the rest of his life barring infection and he should do fine, he should be able to walk around."

None of the vets are swine practitioners, but they reached out to several large-animal vets, and exotic animal specialists around Ottawa and Montreal.

Cohen and da Costa plan to give him to a foster home once he's fully recovered.

Then they hope to find him a home at an animal sanctuary or hobby farm.

Da Costa and Cohen said they are trying to raise funds to help support his surgery and recovery and hope to donate for his future care.

Cohen said the great thing about the experience is fully understanding how similar pigs are to dogs or cats.

"You know his emotions he feels pain, fear... and he's become comfortable in our presence and he recognizes us and he's just like any other creature. He just wants to live and be happy," da Costa said.