Ottawa MP Pierre Poilievre was a guest on Ottawa Morning Wednesday to discuss what the federal budget will mean for the capital and the public sector, and here's what he had to say. 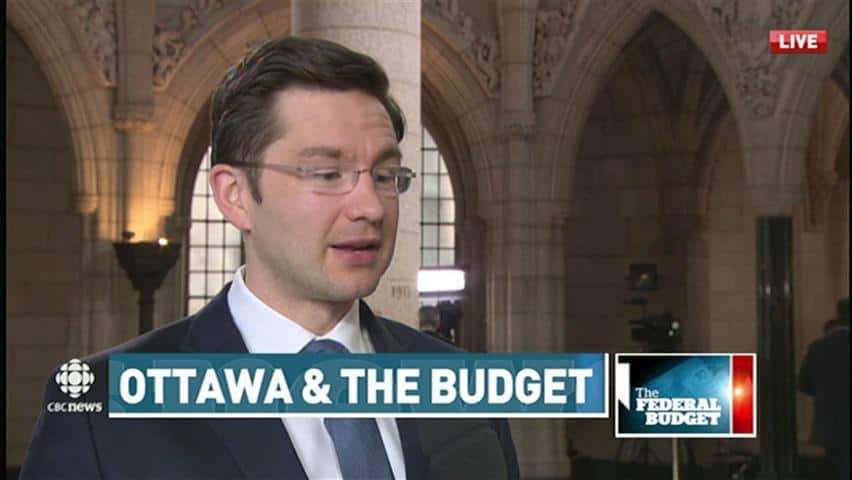 5 years ago
4:00
Pierre Poilievre, the MP for Nepean-Carleton, weighs in on what the 2015 federal budget means for residents of Ottawa. 4:00

Pierre Poilievre believes the Harper government has done a "great job" reducing the size of the federal government and that rank-and-file civil servants agree with this approach, despite a brewing battle over saving $900 million by reducing sick leave benefits.

The human resources minister and Nepean-Carleton MP was a guest on Ottawa Morning Wednesday to discuss what the federal budget will mean for the capital and the public sector.

On mobile? Listen to the full interview with Poilievre.

Ottawa Morning host Robyn Bresnahan spent the first few minutes of the interview asking Poilievre questions about $900 million in projected savings from overhauling sick leave for public servants — something Robyn Benson, the head of the Public Service Alliance of Canada and others say amounts to the government not bargaining in good faith, counting on funds it hasn't yet secured in collective bargaining. Here's the exchange in full.

Bresnahan (RB): "[Public service union leaders say] You're taking money you don't have. How do you respond to that?"

RB: "But that's something that's still under negotiation, is it not?"

PP: "Yes. And we will negotiate in good faith with our public service partners."

RB: "So why promise this $900 million in savings if it's something that hasn't been negotiated yet?"

PP: "I think it signals to the public sector unions the money that's available, and that we'll all have to negotiate within the confines of the money that Canadian taxpayers can afford."

RB: "But can you see how it might be perceived by some public servants, who would say, 'If you're promising this money then there's no point in negotiating because you've already made up your mind.'"

PP: "Well, together we'll negotiate how to achieve it. We only have a certain amount of money available and when we negotiate collective agreements we have to find a way to pay for them out of that available money. Budgets don't balance themselves, it takes fiscal discipline, and both the union and the government will have to show taxpayers that discipline."

RB: "So that $900 million in savings is not set in stone. If you're up for negotiation that could change."

PP: "No, it is set in stone. What's up for negotiation is how we achieve those savings."

RB: "Also, if the projected savings cannot be achieved through these negotiations with the unions, the budget states that the government will take steps to introduce those changes, and I'm wondering what that actually means?"

PP: "The reality is we have an envelope of money to cover the cost of the administration of government, and the public sector unions will have to negotiate with us to find a way to operate within that boundary."

"The public service workers agree with the direction of our government," the minister said, disagreeing that morale in the federal government ranks is low.

"I listen to the hard-working public servants in my riding and they tell me that we've had a great working relationship and that they agree, because they are taxpayers as well..."

Public service negotiations start to reach their deadlines this fall, at around the same time Canadians are set to head to the polls for a general election.

Poilievre said he thinks his government has a good relationship with public servants and that is reflected in the fact that the majority of the National Capital Region's MPs were elected to represent the Conservative party.