The Picton and Bloomfield drinking water plant could be restarted as early as this afternoon, as spill experts work to ensure Picton Bay is free of contaminants leaked by a partially submerged barge last week. 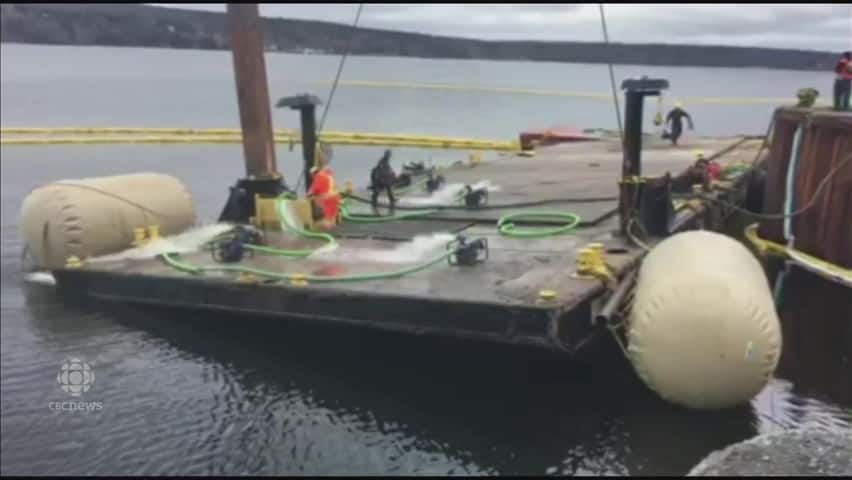 4 years agoVideo
0:11
This Canadian Coast Guard video shows the scene when a salvage crew lifted a partially submerged barge out of Pictin Bay. 0:11

The Picton and Bloomfield drinking water plant could be restarted as early as this afternoon, as spill experts work to ensure Picton Bay is free of contaminants leaked by a partially submerged barge last week, Prince Edward County's mayor told reporters Monday morning.

The county declared a state of emergency last week after a barge containing diesel fuel and hydraulic fluid began leaking an undetermined substance into the bay.

Residents there have been under a boil water advisory since last Friday when officials detected a "petrochemical smell" near a water intake pipe. That advisory will likely remain in place until the end of this week.

"I expect that today we will be able to start producing water and verify that it's safe for the system," said Robert McAuley, the county's commissioner of engineering, development and works.

"At the best, most optimistic estimate, I'd say we could be delivering something, I'd say, by Wednesday."

McKiel Marine Limited re-floated the barge over the weekend, and Robert Quaiff, the county's mayor, said all hazardous materials had been removed from the vessel and the risk of contaminants affecting the water supply had been "reduced."

The barge, which was towed out of Picton Bay this morning, is now en route to Toronto.

'The province is watching'

During this morning's media update, McAuley deflected criticism that the county's response was overblown.

"I, for one, am not going to put the health and safety of any resident of Prince Edward County in jeopardy," he said. "We have the province watching us. We have the minister of environment calling us personally."

McAuley said it's too early to evaluate the county's response to the emergency, but said he's "heartened" by the quick actions taken by municipal staff.

"I feel good about what we've done and that the process works. I'm pleased. I'm very pleased."

The county said residents should continue to limit their water use and can get two 10-litre jugs of clean water per day from the community's fire hall.

Meanwhile, Quaiff warned residents about a scam from people posing as municipal workers.

He said some people have been tricked into letting the scammers, who claim to be testing the quality of their water, into their homes.

"Municipal staff do not request access to private residences for the purpose of gathering water samples unless called on by the property owner to investigate a specific issue," he said.

Later today, Quaiff said the Canadian Coast Guard will begin leaving the site of the leak.

Officials from Ontario's Ministry of Environment and Climate Change will remain in the area to conduct water quality tests. A company contracted by McKeil Marine will conduct daily water tests in multiple locations.