The troubled Phoenix pay system for Canadian public servants will need over a billion more dollars to fix once and for all, a process that could take another four years, a federal watchdog says.

The troubled Phoenix pay system for Canadian public servants will need over a billion more dollars to fix once and for all, a process that could take another four years, a federal watchdog says.

Parliamentary Budget Officer Yves Giroux said in a report released Thursday that the final cost of the system, which has improperly paid tens of thousands of public servants since launching in 2016, could be as high as $2.6 billion.

The government has spent or plans to spend more than $1.5 billion so far, according to the latest federal budget.

Giroux said the new pay system should take $57 million to launch, which he estimated won't happen until 2023 at the earliest because Phoenix has to be stabilized first. 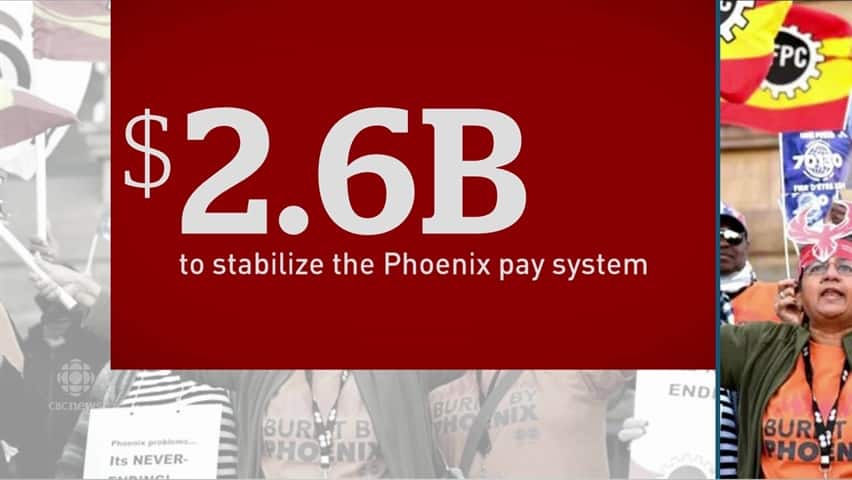 2 years ago
0:59
Parliamentary Budget Officer Yves Giroux says the final cost of the system could be as high as $2.6 billion, with another $57 million spent on finding a new system and training employees to use it. 0:59

He said it should take about $105 million per year to run the new system, after looking at the costs of other large, complex pay systems.

That should be cheaper on a per-employee basis than both Phoenix and the system it replaced.

The replacement needs to be able to handle the complex network of dozens of different federal collective agreements and their benefit, pension and salary quirks.

"The solution can't be off the shelf. There's no system that can deal with that level of complexity … We don't know how much because when we tried to get that information, [we were told] it's all commercially sensitive."

The government budgeted $16 million starting last year to start replacing Phoenix, but has not yet awarded a contract.

Five firms are in the process to replace the system, but the government is moving through the process slowly to try to ensure the same mistakes aren't repeated.

In a statement, a spokesperson for one of the departments working on fixing and replacing Phoenix said it welcomed the report.

"In the coming weeks, the Next Generation team will present options to the Government for next steps, which will likely include multiple pilot projects to test possible solutions beginning later this year," it said.

What began as a $5.7-million contract with IBM to replace the government's previous pay system has now ballooned to more than $393 million.

The system still has a backlog of almost 250,000 cases above what would be considered normal as of the government's last update on March 20.

With files from Hannah Thibodeau