'A state of crisis': Indigenous group calls for change as Canada Day nears

A grassroots group of Indigenous people who set up a teepee on Parliament Hill ahead of Canada Day celebrations, despite police opposition, say they're calling on Canadians to "address the pathology" of assimilation, colonization and colonialism in the country.

'Recognize me as a human being, because that is the fundamental problem, a crisis situation that we're facing'

A grassroots group of Indigenous people who set up a teepee on Parliament Hill ahead of Canada Day celebrations, despite police opposition, say they're calling on Canadians to "address the pathology" of assimilation, colonization and colonialism in the country.

At a news conference at the National Press Gallery Thursday, Jocelyn Wabano-Iahtail declared a state of emergency, saying Indigenous people have been killed for centuries, and that their teachings and way of life aren't being taken seriously in attempts at reconciliation such as the national inquiry on missing and murdered Indigenous women and girls.

"Recognize me as a human being, because that is the fundamental problem, a crisis situation that we're facing here on Turtle Island, that the settlers don't view us as human beings. We're still fighting. What you take for granted, we're still fighting for that right," Wabano-Iahtail told reporters.

"We're declaring a state of crisis in what's happening here in what you know as Canada, that there is a hunt taking place on our Indigenous human beings."

She called the inquiry "colonially co-opted" and discriminatory.

"You don't get to tell us how that inquiry is going to look like. It's not your children you're burying. That's white privilege that you've been honoured with. It's not you that are dying. We've been dying for 524 years, that's why we're here," Wabano-Iahtail said. 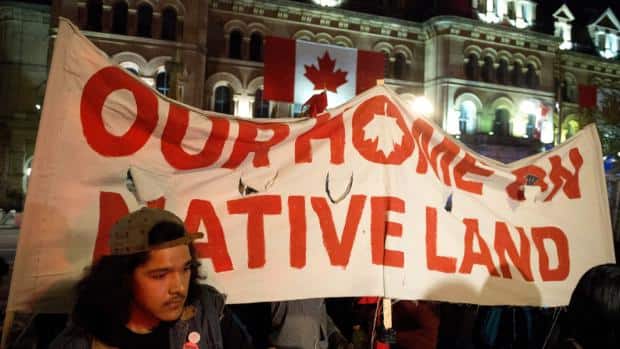 Indigenous rights activists clash with police on the Hill

4 years ago
1:03
Several arrests made as activists attempt to raise teepee 1:03

A grandmother named Sophie from Moose Cree First Nation then stood up, saying people deserve "to be believed and acknowledged, to be heard in trust and good faith … to feel safe and secure, to know a safe and loving touch" and more.

She also said they were met with violence Wednesday night trying to set up the teepee on Parliament Hill.

We are not a violent people. We don't believe in violence, and right away we encountered violence.- Sophie , Moose Creek First Nation

"What we encountered last night was not very pretty. We were bringing in the teepee poles and the police just came forth and tried to stop us. And I told those men, hold those teepee poles up, don't let them go, we can't let this go, we can't, we just can't," she said.

"That teepee is our mother. The skirt of that mother is that teepee that you see outside there. And we brought that teepee there to help the water protectors while they do their fasting.… What is wrong with that? We are not a violent people. We don't believe in violence, and right away we encountered violence. That's the same way our elders and our ancestors were treated by RCMP."

The news conference became charged when activists took offence to questions from reporters.

Wabano-Iahtail objected to a question from a CBC reporter, including the suggestion that Trudeau could not be held responsible for the death of an Indigenous youth in northern Ontario. 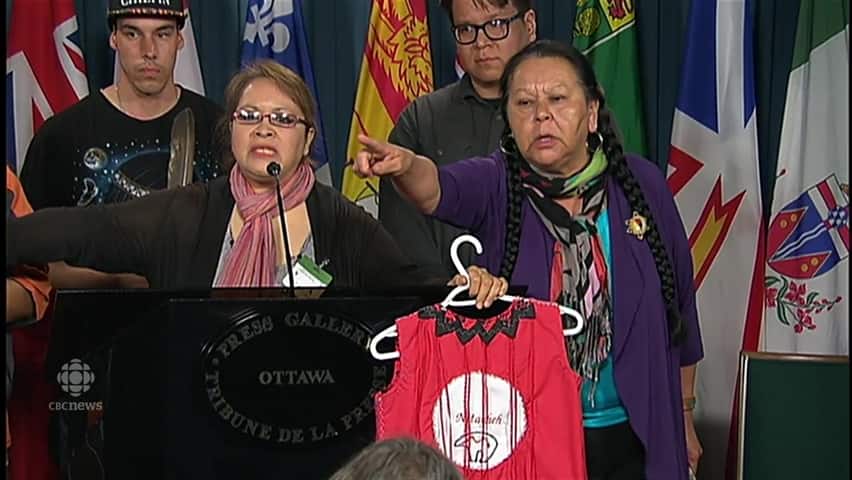 'Don't speak to us that way': Indigenous activists react to reporters

4 years ago
4:17
Activist Jocelyn Wabano-Iahtail takes issue with a question about whether Prime Minister Justin Trudeau should be held responsible for the death of an Indigenous youth. 4:17

"Excuse me, did I just hear you correctly? You can't speak to us like that."

Reporters then asked for Wabano-Iahtail's opinion on Trudeau's record on Indigenous issues compared with that of his predecessor, Stephen Harper.

"You're a guest here, and you don't even know how to speak to us. You don't even recognize the tone in your voice, in your delivery," Wabano-Iahtail said before cutting off the CBC reporter, calling her "white lady."

At a news conference in Charlottetown, Trudeau was asked about the teepee ceremony. He said it's important for people celebrating Canada 150 to "reflect upon the experiences and the importance of folding in and hearing the stories and experience of Indigenous Canadians.

"We recognize that over the past decades, generations, and indeed centuries, Canada has failed Indigenous Peoples. We have not built the kind of present, the kind of future for first peoples, for First Nations, for Inuit, for Métis people across this country. We need to be doing a much better job of hearing their stories and building a partnership for the future," Trudeau said. 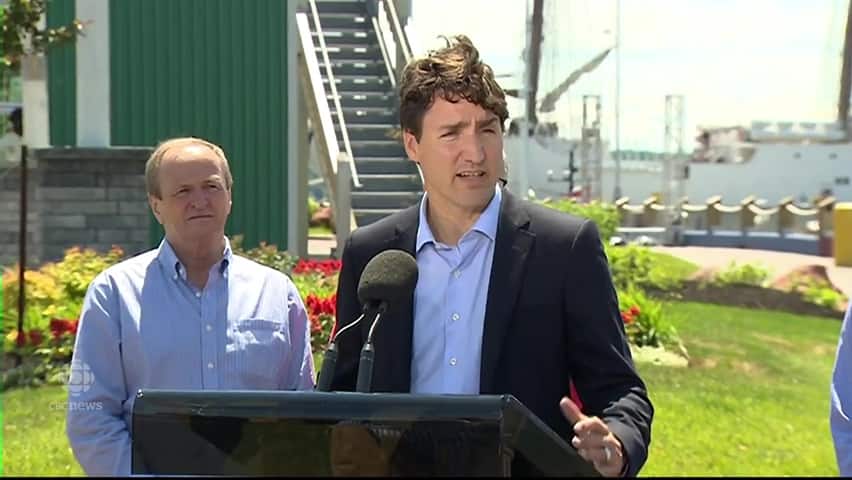 4 years ago
2:39
The Prime Minister was speaking to reporters in Charlottetown 2:39

"I understand and hear very clearly the issues a number of people, including those who were setting up a teepee on the Hill, are expressing. We just have to make sure that we deal with both what are going to be historic crowds on Canada Day on the Hill, but also deal with people in a respectful and responsible way.

"That's what I expect of our security services and that's what I'm hoping to see. I haven't seen the full details of what went on, but I certainly know that we are looking to make sure that Canada 150 reflects the entire diversity of Canada."

In an emailed statement, a spokesperson for the Parliamentary Protective Service said only that discussions with the organizers of the ceremony on Parliament Hill are continuing.

"Out of respect for this group, our efforts at this time are centred around maintaining an open and collaborative dialogue with the organizers," wrote Melissa Rusk. "The PPS, in partnership with the RCMP, remains committed to ensuring we respect the charter right to peaceful protest with the collective interest of public safety."

The young people who plan to fast in the teepee for several days said they believe they would have been met with opposition if they had tried to go through official channels to erect the teepee.

"All that transpired was an attempt to have a peaceful ceremony on Parliament, but we were met with great resistance. And what I think that conveyed was a broader anxiety from the settler colonial state of Canada about Indigenous jurisdiction," said Freddy Stoneypoint, one of about nine people who were detained while trying to set up the teepee. 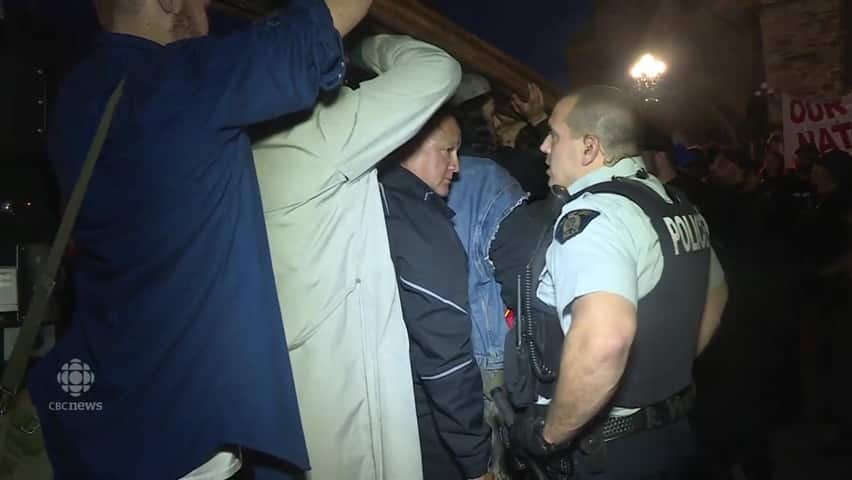 4 years ago
0:21
A group of Indigenous people and supporters headed to Parliament Hill Wednesday night to try to perform a ceremony and erect a teepee, but faced opposition from police. 0:21

The people who were detained were later released, and at about 3 a.m. Thursday, group members were allowed to put up the teepee on the far southeast corner of Parliament Hill.

"Indigenous people, in terms of challenging the legal legitimacy of the state, just our existence alone through our ceremonies poses a great threat to the colonial ideologies that are currently in place in Canada," Stoneypoint told CBC Radio's Ottawa Morning in an interview from the Hill.

Asked about security concerns ahead of Canada Day, Stoneypoint said the group would have been met with opposition regardless of their approach.

"I don't buy the terrorist threat at all.… We're not terrorists at all, we're a peaceful organization that is centred around ceremony, and we're also inherently about building community," he said.

Candace Day Neveau, another participant in the group, said they're "challenging Canada" and taking up some space for Canada Day celebrations.

"[We're always] misunderstood and made to look like we're whining, but it's just that we're here to simply send out an invitation … to please listen to what we have to say. If we don't exert our inherent right … it's just an ongoing process of us always getting constantly re-traumatized and feeling like no one's listening to our voices," she said.

"It's this push that the young people are leading. If we keep at this pace, can you imagine what's going to happen? We're raising the bar."