While all Ottawa public school students will be affected by job action this week, elementary kids are getting a double whammy as tensions in the ongoing labour dispute between teachers and the province ramp up. 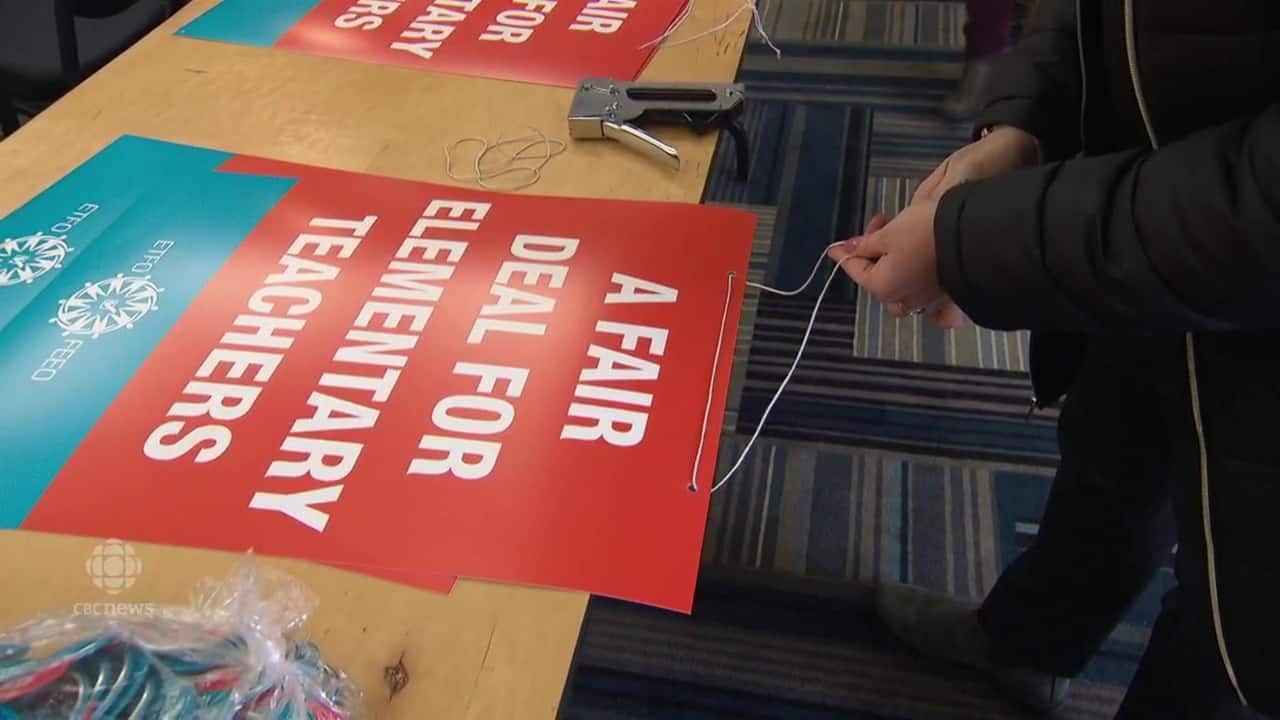 1 year agoVideo
0:32
Christine Moulaison, who also co-chairs the Ottawa Carleton Association of School Councils, says community members are coming together to help families who will be affected by this week's strike.  0:32

While all Ottawa public school students will be affected by job action this week, elementary kids are getting a double whammy as tensions in the ongoing labour dispute between teachers and the province ramp up.

Starting today, members of the Elementary Teachers' Federation of Ontario (EFTO) will no longer supervise extra-curricular activities nor participate in field trips or activities outside regular school hours.

It's happening the same week high school teachers and support staff in the Ottawa-Carleton District School Board (OCDSB) — all members of the Ontario Secondary School Teachers' Federation (OSSTF) — are set to walk off the job for a single day Wednesday, effectively shutting down the board's high schools and elementary schools.

"I've tried to explain to my daughter why they're doing what they're doing," said parent Christine Moulaison, who also co-chairs the Ottawa Carleton Association of School Councils.

"She grasps quite a bit, but at the same time it's difficult to explain that to a 10-year-old."

While kids may miss the extra-curricular activities, Moulaison said the walkout's biggest impact is on parents.

"Not every parent can take time off work. That's not something everyone can afford to do," she said.

The OSSTF launched a work-to-rule campaign in late November that's involved a series of rotating one-day strikes designed to put pressure on the provincial government.

The Jan. 15 walkout is the second to affect Ottawa-area schools. It will involve staff with the OCDSB and the Upper Canada District School Board (UCDSB) and Conseil scolaire de district catholique de l'Est ontarien.

Like the last time, the OCDSB will shut down both high schools and elementary schools, since the OSSTF also represents elementary school support staff including office workers, maintenance staff, and both adult and early childhood educators.

'Not time to panic'

Scott also warned things could get worse before they get better.

That's because if a deal with ETFO isn't brokered by Jan. 17, elementary teachers have signalled they too will begin one-day walkouts, with different boards affected each week — similar to the OSSTF's strategy.

The uncertainty for families is huge because they don't know when any of these days are going to be happening.- Lynn Scott, OCDSB chair

"But you do need to consider alternative arrangements in case we have more withdrawals of service."

While the labour dispute is posing problems for parents and children, Scott said there's room in the academic calendar to make up parts of the curriculum missed by strike days.

She also encouraged parents to make child-care plans that can come together in five days, as that's the most notice they'll likely get.

"The uncertainty for families is huge because they don't know when any of these days are going to be happening — and they have to scramble for child care," Scott said.

Moulaison said she hopes the city and other child-care providers consider creating a few more spaces for parents if the dispute continues.

She said while many parents currently support the teachers, there could be a breaking point.

"If this goes into a full-blown strike and you have several unions striking at the same time, that could prove to be very difficult for some parents," Moulaison said.

Nancy Akehurst, president of the local OSSTF chapter, said members were surprised by the level of support from parents during the first walkout.

"We had a parent come with pizzas for everybody," said

"We've had cars honking and coffee and bagels and doughnuts and french fries, and all kinds of things brought by parents to support our members who are walking the line. I honestly believe we have a lot of support."

'This is not a game'

However, Ontario's Minister of Education Stephen Lecce said unions should consider the impact on parents as negotiations drag on.

"This is not a game," said Lecce after the Jan. 15 walkout was announced. "These kids should be learning every day, and my hope is that all unions would accept that."

Some of the sticking points include the province's desire to increase class sizes and mandatory high school e-learning courses, while also capping wage hikes.

Elementary teachers are also seeking a written guarantee that the province will not eliminate full-day kindergarten.

In addition to the OSSTF and ETFO campaigns, teachers belonging to the Ontario English Catholic Teachers' Association (OECTA), which represents both elementary and secondary school teachers in the Catholic boards, also begin their own limited job action Monday.

While schools with the Ottawa Catholic School Board will be open Jan. 15, the Ontario English Catholic Teachers' Association will hold a one-day province-wide strike on Jan. 21 if a deal can't be reached.