Questions are again being raised about the efficacy of the Alert Ready System after some people in Ottawa didn't receive Sunday's emergency tornado warning on their mobile devices.

Questions are again being raised about the efficacy of the Alert Ready System after some people in Ottawa didn't receive Sunday's emergency tornado warning on their mobile devices.

Some residents in Orléans, where the tornado caused damage, said they got an emergency message on their phones, while others said they did not.

Lisa Ouimet, who lives on Bilberry Drive in Orléans, knew a tornado was passing overhead from the way her bolted-down gazebo was moving and swelling.

"About 15 minutes later, we went outside because the neighbours had come to the door to make sure that everybody was OK. We all gathered outside to discuss what had just happened, and that's when we got a notification.

"My next-door neighbour got one on his phone but it was for Gatineau, Que. I never received anything on my phone, my son didn't receive anything. The neighbours across the street, nothing," she said. 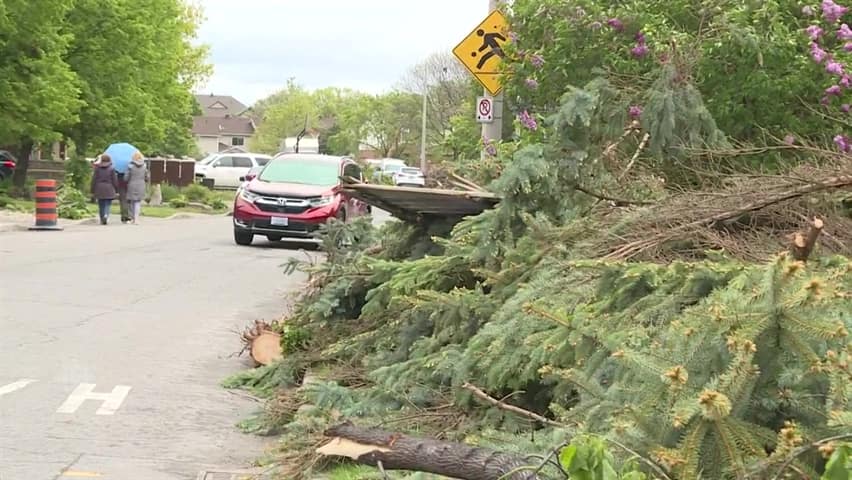 'It came out of nowhere'

2 years agoVideo
1:12
Orléans residents Lisa Ouimet and Kim Lussier say they didn't get an emergency alert before the tornado touched down on Sunday. 1:12

"It happened so fast that we didn't even have time to run to the basement. And then once it was all over, I sat down and ... I just started crying because it could have been so much worse than what happened," Ouimet added.

"I'm not sure how the system works, but something needs to be done. It needs to be fixed."

Francis Morin, who lives on Wincanton Drive in Orléans, said he never got an alert.

He found out about the tornado when his wife, who was in B.C. at the time, phoned him. A neighbour had called her to tell her about the wind damage on their property, and then she called her husband.

An Environment Canada spokesperson said the storm developed without any of the normal indications.

"The atmosphere that evening was not expected to support the development of damaging thunderstorms and the storms that did occur developed very rapidly," said spokesperson Samantha Bayard.

According to Environment Canada, the tornado was first spotted in Orléans, about 10 kilometres southeast of the Gatineau airport, at 5:54 p.m. ET. It moved east along the Ottawa River toward Cumberland, with damage spotted as far as Clarence Creek, Ont.

While the tornado was already moving through the area, Environment Canada issued a tornado warning in Gatineau, Que., Papineau, Que., and the United Counties of Prescott-Russell, Ont., at about 6 p.m. An alert was also issued in Lachute, Que., later Sunday evening.

Bayard said the alerts will bleed across regions if a recipient is close to the area where an alert is issued.  People close to, but not in, the warning areas of Gatineau and Prescott might have received alerts, she said.

The weather agency will review and evaluate its performance, Bayard said.

The Canadian Radio-television and Telecommunications Commission (CRTC) indicated that the lack of a tornado warning in Ottawa may be why some people in the capital didn't receive an alert.

"We don't issue the alerts. If Environment Canada failed to do that, it's something that maybe we have to check with them," added Patricia Valladao, another CRTC spokesperson.

The Alert Ready System was launched in April 2018 to warn Canadians about emergencies such as natural disasters, terrorist threats and Amber Alerts.

It takes alerts issued by organizations such as Environment Canada and police, and distributes them to wireless devices in the areas covered by the alerts.

The company Pelmorex, which operates the technical backbone of the Alert Ready System, wrote in an emailed statement Monday it's received reports that some people in the areas where tornado warnings were issued — Gatineau, Papineau, Lachute, and the United Counties of Prescott-Russell, Ont. — didn't receive the alert.

"We, along with our Alert Ready partners, are in the process of reviewing and validating these identified reports," the statement reads.

The company also said that not all mobile devices are guaranteed to receive alerts. In order for the alerts to work, a device must:

About 98.5 per cent of Canadians had access to LTE networks in 2016, according to the CRTC's 2018 communications monitoring report.

It's not the first time people in Ottawa have complained about spotty alert system service. Less than a year ago, when  two tornadoes touched down in Ottawa, some people complained they didn't receive the emergency alert.

At the time, Pelmorex said the warning system worked perfectly.

In a statement, the CRTC said it followed up with telecommunications industry stakeholders after the 2018 tornadoes, and found that Vidéotron had a software problem associated with iPhone 5s and more recent versions, which prevented Environment Canada's alert from being distributed to Vidéotron wireless customers.

The software problem has since been resolved, the CRTC said.