How an Ottawa teacher is helping students unlearn learning

Rebecca Chambers, a teacher at John McCrae Secondary School, is on a crusade to help her students unlearn traditional learning.

Cameron Lamoureux, 18, never felt smart in school despite being a strong writer and an avid reader. He felt stuck, he said, in an education system that disabled him from choosing his own path.

It wasn't until a Grade 10 history class at John McCrae Secondary School that things changed.

The teacher told him something no one else ever had — that he needed to guide his own learning.

"When we are given the opportunity to learn whatever we want and not having to be told what to learn, it's huge," Lamoureux said. "That really hit me hard. I just started learning as much as I could about anything that interested me."

That somewhat unorthodox instruction, encouraging students to pursue personal betterment rather than grades, inspired Lamoureux to start a blog with his thoughts on education and the books he's read.

"I felt like I wasn't able to completely develop in the current system," he said. "I struggled a lot with the idea of getting grades.... I felt like it was worthless."

The history teacher who changed things for Lamoureux was Rebecca Chambers, who has embarked on a crusade to help students — as she puts it — unlearn learning.

Her method helps students unlearn traditional school structures and encourages them to be responsible for their own learning. Students use Twitter instead of paper, assess themselves through reflection, and choose both what they learn and how they learn it.

The aim is to foster confidence and a set of essential life skills that allow them to be self-motivated, to take risks and to be self-regulated.

"[Students] have this idea of what school is, and for the most part it's, 'Be quiet, wait for instructions and then we go from there,'" said Chambers, who teaches world issues, history and anthropology, psychology and sociology.

"I'm going through the process of breaking them of that."

A handful of schools across North America have implemented the alternative teaching methods like unlearning, but uptake has been slow, especially in mainstream public schools. 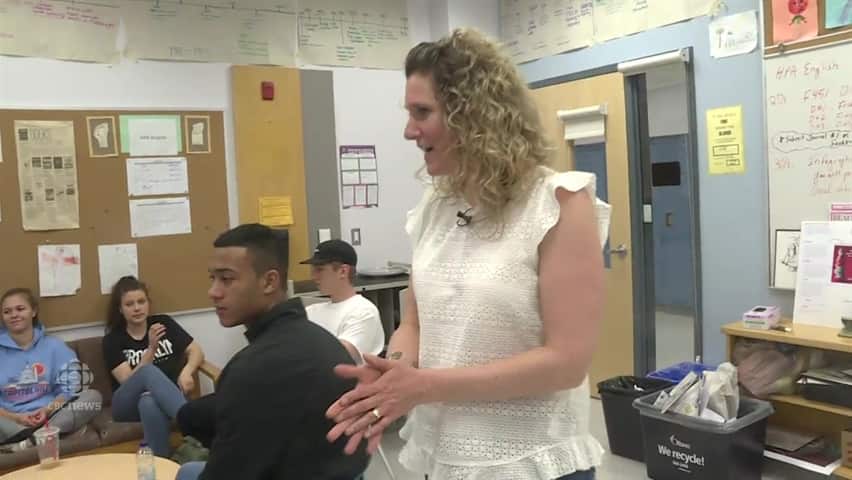 History teacher Rebecca Chambers says she wants students to take on issues they're passionate about and then look at how they can help solve a problem.

5 years agoVideo
1:19
History teacher Rebecca Chambers says she wants students to take on issues they're passionate about and then look at how they can help solve a problem. 1:19

'A lot of collaborating'

At first glance, the students in Chambers's world issues class appeared disengaged on a recent visit. Some curled up on couches, most stared at their phones and the classroom was only half full.

The reason for the low attendance, however, was that many of them had gone to a retirement home to start a care program for elderly residents.

"[Normally] a lot of people find my class loud. I like to describe it as controlled chaos," Chambers said. "Students are all working on so many different things, so it's really hard for them to be quiet, and there is a lot of collaborating, brainstorming and discussing."

Two students recorded their first podcast about their experiences in the Ontario Hockey League and the mental health challenges associated with the sport.

Another group of students crafted compost bags to sell at a fundraiser.

Chambers said her class is structured but enables individual growth and engagement.

"You definitely have to kind of change your philosophy and the way you think in order to be successful [in the class]," said Mandela Mahatma Singh-Sharp, a Grade 11 student.

"[Your] success isn't really based on your mark, it's based on how much progress you make and how much change you can create."

The Ottawa-Carleton District School Board (OCDSB) is home to five alternative schools that use non-traditional teaching methods and smaller classrooms for a select number of students who are either at risk or have specific needs.

A handful of private schools in the city also employ alternative learning methods.

So for the vast majority of students, the classroom and the learning that happens there follow traditional methods.

Students sit in rows, teachers lecture from the front of the class, and tests and exams are the primary means of evaluating progress. Nearly everyone is required to learn the same thing at the same age, and the freedom to choose what to learn is almost nonexistent.

"Traditional schooling needs to be absolutely rethought. Having kids sit still in class and take down notes from a board and listen to lectures ... I think that's a proved disaster," said Angus McMurtry, an education professor at the University of Ottawa.

Teachers are increasingly adopting unlearning methods, he said, but there are many who find it difficult to unlearn old habits.​

Chambers adopted the unlearning method because of her own difficult experiences in school, she said.

A lot of teachers become teachers because they loved school. I was the total opposite.- Rebecca Chambers

She vowed to change things for other kids.

One of the most troubling manifestations of traditional learning, Chambers said, is that it often fails to help students recognize their skills and abilities, and nor does it always encourage positive feedback. Chambers remembers being told by a high school teacher that she was writing at a Grade 8 level.

When she asked Lamoureux to start his blog, he initially told her he didn't want to because he never thought of himself as smart.

"[When] he ended up putting the blog together ... [he] had people from all over the world looking at it and influencers in Canada promoting it," she said. "It broke my heart.... He's a great writer. He's brilliant."

Lamoureux said Chambers's class taught him how to learn for himself.

"That's probably the biggest advantage that I will gain in this class — I've learned how I learn, and a lot of students don't get that opportunity."