A statue outside Christ Church Cathedral on Sparks Street that depicts Jesus as a homeless person sleeping on a bench is drawing a range of reactions from passersby.

At first glance, it looks like a homeless person huddling for warmth beneath a blanket, lying on a park bench along the west end of Sparks Street.

A closer inspection reveals nail marks in the feet.

This is Homeless Jesus, one of a series of life-size bronze statues from Canadian artist Timothy Schmalz.

It's been sitting outside Christ Church Cathedral since late spring and it's been getting a lot of love from passersby.

"There have been people who have left flowers on the statue, one person actually placed coins in the wounds and someone put a blanket on it," said Shane Parker, dean of the Anglican Diocese of Ottawa.

Parker says the statue reflects the church's ongoing work to help the homeless.

He says he often sees pedestrians doing double takes as they walk past, while others stop and study it.

"Some people cross themselves, some people just sit at the feet of the sculpture and spend time there," said Parker.

"I think my favourite was one day, one of choir kids locked his bike to it, which was just fine."

Emma Comeau walks by the sculpture everyday on her way to work.

She says she's struck by its message of compassion for the homeless.

"It's about not knowing what everyone's story is, not to judge and to be open to helping other people." said Comeau,

"It's a beautiful way to represent it."

"I just noticed the wounded feet," said Damien Morden, who often passes the statue on his lunch hour stroll.

"If you strip Christianity back to its basics, it's about Jesus helping people out and taking care of the disadvantaged." 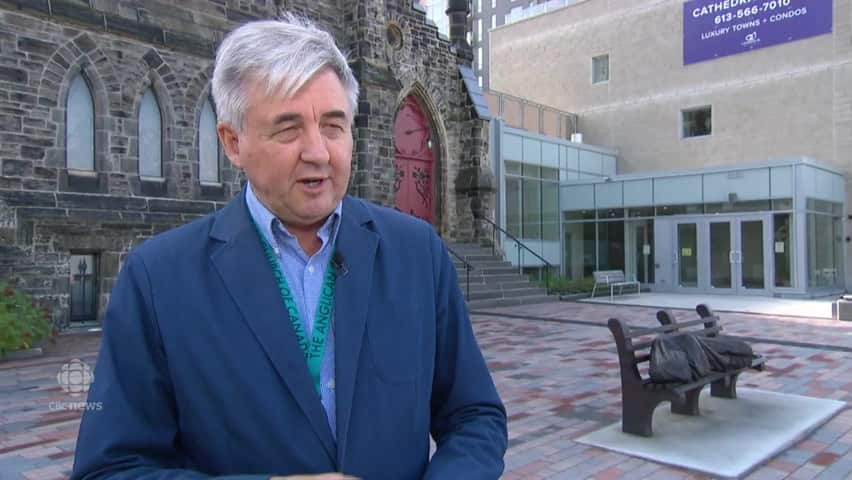 2 years agoVideo
0:58
One of a series of life-size bronze statues from Canadian artist Tim Schmalz has been sitting outside Christ Church Cathedral since last spring. Shane Parker, Dean of the Anglican Diocese of Ottawa, has been observing the reactions of passersby. 0:58

The church says it has only received one complaint that the statue is "inappropriate" since it was dedicated on May 20.

But similar versions have met with criticism and controversy.

In 2016 two Catholic churches in New York and Toronto refused to accept a sculpture which depicted Jesus as a homeless person.

The work has since been blessed by Pope Francis and sits in front of churches around the world, including in Vatican City.

Members of the public in other cities have also called the police and emergency services to attend to what they assumed was a vagrant sleeping on the street.

Schmalz said from his studio near Kitchener-Waterloo he created his first Homeless Jesus to give visibility to the plight of the world's homeless.

He says he was inspired by a passage from the New Testament.

"It says whenever you help the least of our brothers and sisters, you are helping Jesus."

Parker says that people are responding to a message of compassion that is universal and transcends religion.

"It's a simple sculpture that speaks volumes."