Parents and coaches of 11- and 12-year-old girls on an Ottawa soccer team say they're furious after being sanctioned for taking the young players to England to learn from some of that country's top youth clubs.

Parents and coaches of 11- and 12-year-old girls on an Ottawa soccer team say they're furious after being sanctioned for taking the young players to England to learn from some of that country's top youth clubs.

Members of the Ottawa South United under-12 girls Force Academy Black team made the trip during March break to see the sights and scrimmage with youth teams linked to top English clubs Chelsea, Manchester United, Everton and Tottenham.

Why do we even have rules like that, which we know are killing the passion for the game?-  Bill Michalopulos, Ottawa South United Soccer Association

The 14 girls also met Tottenham's women's team and got pointers from the team's coaches. They took in a Chelsea F.C. match before heading back home.

Soon after the girls and their chaperones returned, however, the club discovered it was facing disciplinary action for disobeying rules set down by Ontario Soccer, the sport's main governing body in the province.

"As a parent group, I think we were quite infuriated that they would limit our opportunity to grow, to learn and to see other cultures," said Bill Swyers, whose daughter Anna is a striker on the team. "I mean, the experience that Anna herself took back from Europe, I couldn't match." 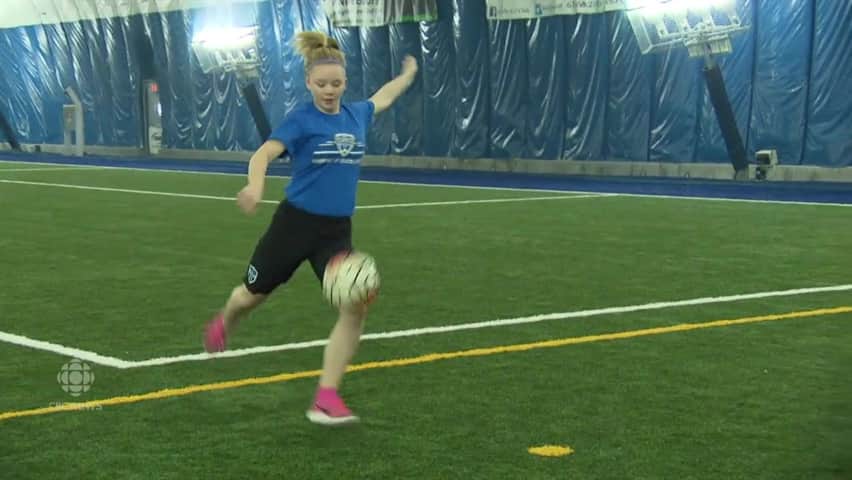 A trip of a lifetime

4 years ago
0:52
11-year-old Anna Swyers, and her father Bill, say speaking with professional players in England was an unbelievable opportunity. 0:52

The club reports to the Eastern Ontario District Soccer Association (EODSA), which in turn falls under Ontario Soccer.

The club said it informed the EODSA about the trip in February and expected district organizers to pass the information along to Ontario Soccer.

But in an email obtained by CBC News, the EODSA's operations manager responded by informing the team's coaches that Ontario Soccer regulations forbid U12 teams from travelling outside North America.

The club's president acknowledges the team blatantly broke the rules.

"It was a unique experience. It should be something that's celebrated from Ontario Soccer, and all soccer in Canada," said Bill Michalopulos, president of Ottawa South United Soccer Association, who also coached the U12 team last season.

"Then we're told a month before we leave, 'No, you can't.' There was no way we were going to play ball in that case."

A disciplinary hearing was held April 5 and the team was fined $400 by the EODSA April 10. The team is paying $500 to appeal the decision to Ontario Soccer.

A group of parents has sent a letter to Ontario Soccer questioning its rules and governance structure, and asking the association to reconsider the punishment.

Bob Monaghan, director of the EODSA's board, said the district was directed by Ontario Soccer to discipline the club over what he called "a stupid law" regarding travel regulations.

The $400 fine was the smallest the district association could impose, he said.

"If there's enough of a rationale or reason, then it can be considered."

Miller said he is aware of one U12 team from outside Ottawa that received special dispensation to travel to Sweden last year, leeway granted only once or twice a year.

'Killing the passion for the game'

The U12 Force Academy Black team planned the trip for nearly a year and had raised about $16,000 through bottle drives and bagging groceries.

By the time they received the response from the EODSA, plans had already been made, plane tickets purchased and accommodation booked.

For the girls on the U12 team, the trip was a dream come true.

"I was just blown away. I've been on a lot of trips and none have been even close to as amazing as England. It was just such an amazing experience," said Anna Swyers.

Swyers, who hopes to one day play professional soccer in Europe and represent Canada at the Olympics, said she was amazed at the level of competitiveness among the English players her age, and said the trip taught her to "work hard and dream big."

​"[The girls] said that it was the best experience of their lives. They grew as individuals, they grew as people, they gained more confidence. But now, they've come back to Canada and some adults are telling them, 'Well you know, you weren't supposed to do that,' and it's wrong," Michalopulos said.

"Why do we even have rules like that, which we know are killing the passion for the game?"