People continue to gather at the National War Memorial in downtown Ottawa, one week after a gunman shot and killed a soldier standing guard and then stormed the front door of Parliament. 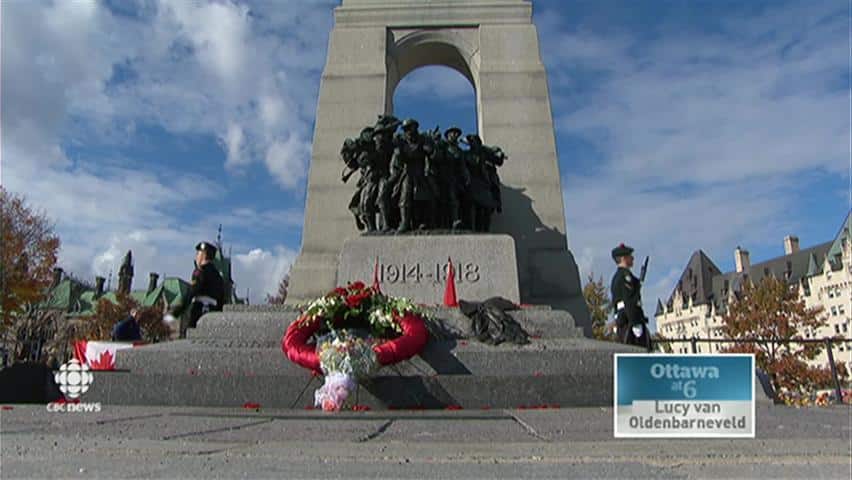 6 years ago
3:08
Soldiers at War Memorial and others affected reflect on how they are dealing with the incident. 3:08

People continue to gather at the National War Memorial in downtown Ottawa, one week after a gunman shot and killed a soldier standing guard and then stormed the front door of Parliament.

A week after the death of Cpl. Nathan Cirillo, calm has descended on the war memorial and the rituals of remembrance have resumed for those who gave their lives in war.

For some visitors, the feelings are still raw.

"It took me about a week to work up the courage to come here because I just had too many emotions. I drive by here every day on my way to work and I bring my children here. They've been to the tomb before and they've talked to the soldiers before. And it's just heartbreaking that a young life would have been taken that way," said Ela Ienzi.

NDP MP Carol Hughes was at her party's caucus meeting when gunfire erupted inside Parliament and she came to the memorial Wednesday for healing.

"I really felt the need to come back today," Hughes said. "I think that we're all feeling this as Canadians."

Hughes said she had just finished speaking at her caucus meeting last week when the gunfire erupted.

"I happened to be sitting right behind the door that the bullet hole, that the bullet went into," she said. "So I didn't realize until Thursday night how close it was. And it certainly makes you think."

The crowds who gathered one week after the shooting either snapped photos, or just paused to reflect. Some came to say thank you to the soldiers who now stand guard where a comrade fell. They continue to be unarmed.

But heavily armed Ottawa police officers have watched over the ceremonial guards at the Tomb of the Unknown Soldier.

Const. Santiago De Los Santos said he will donate his overtime pay to the familes of Cpl Cirillo and WO Patrice Vincent — and that many other officers plan do the same.

Riley Hryniuk, one of the ceremonial guards on duty at the war memorial, is a bombardier with the 3rd Field Regiment RCA.

"We all had our grievance phase. We're basically just getting back into the groove of being back the tomb. We all feel a lot more protected with the police around, being that we don't have loaded weapons up there," he said.

"I guess we're all doing a little bit better."

Also in the wake of the Ottawa shooting, the Royal Ottawa Mental Health Centre held a public conference Wednesday night on grief and trauma. Dr. Jakov Shlik said it was a chance to share experiences and learn about what has helped and what hasn't.