Paper argues showing video is clearly in the public interest

The Ottawa Citizen said Wednesday it has no intention of taking down a secretly recorded video of several Ottawa Senators players despite a legal notice insisting leaving it online violates provincial privacy laws.

The Ottawa Citizen flatly rejected the legal notice from the Senators, saying the video shot surreptitiously by an Uber driver was circulating on social media when the paper decided to report on it.

Editor in chief Michelle Richardson also countered allegations contained in the notice signed by team lawyers, which asserted the footage of players badmouthing the club and a member of its coaching staff violated their privacy under provincial law and did not contain information of public interest.

"The public interest in the Senators as an organization extends beyond the team's performance on the ice," Richardson said in a statement, adding that the paper did not view the sharing of the video as a privacy violation.

"The organization is involved in one of the biggest development projects in Ottawa's history, a project that hinges on the Senators being here to play in a downtown arena. On-ice performance, ticket sales, attendance, discord in the locker room and public support of the organization are all relevant when it comes to discussing the overall health of the team."

In the legal notice sent to Richardson on Wednesday, lawyers blasted the newspaper for its decision to share the surreptitiously shot video on its website.

The five-minute clip, which shows seven Senators players ridiculing Senators assistant coach Martin Raymond and scornfully discussing the team's penalty-killing performance, was shot without the players' knowledge by the driver of the Uber vehicle they were riding in while on the road in Phoenix, Ariz. The video shared by the Citizen also appeared on websites of other publications owned by Postmedia Network Inc., the paper's parent company.

The notice also asserts that the newspaper published the video while fully aware that it had been shot without consent, arguing that the contents were of no "genuine public interest." 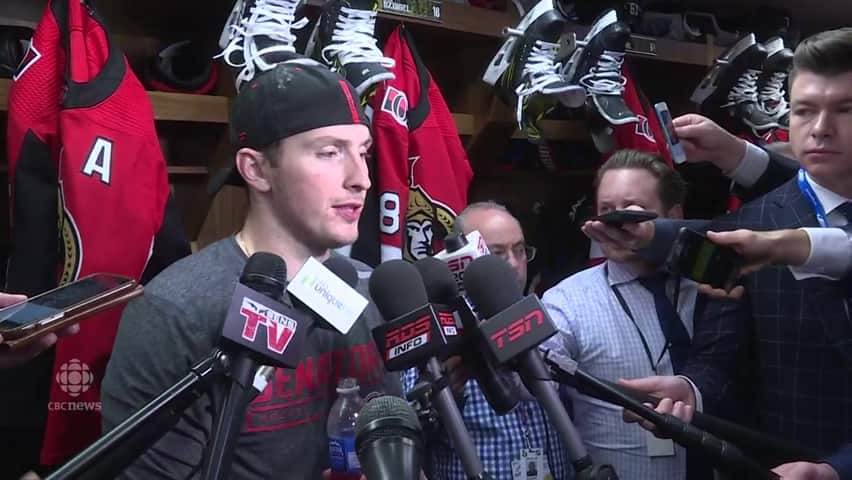 2 years ago
0:46
The Sens' Matt Duchene apologizes for the comments he and his teammates made about assistant coach Martin Raymond in a leaked Uber video. 0:46

The players captured in the video released a statement Monday apologizing for their remarks, while also clearly stating that the footage was both shot and shared without their permission.

Individual players have since spoken out affirming their support for Raymond, saying they're trying to put the saga behind them.

An Uber spokesperson said the recording was a "clear violation" of the company's community guidelines, adding that Uber had helped to have the video taken down.

The notice to the Citizen noted that the video had already been pulled from YouTube on the grounds that it was shot in secret.

Scholars and industry observers voiced concern about the incident, calling it a clear violation of the players' privacy.

"Martin Raymond and our players have earned our support through years of hard work, leadership and devotion to their community," Ruszkowski said in a statement.

"Privacy is paramount, and we won't allow a precedent to be set in which peoples' reputations can be impaired by voyeuristic journalism."

Ruszkowski declined to comment on the Citizen's intention to keep the video online.