The death of Ottawa teen Rowan Stringer, who suffered a severe head injury during a rugby game last week, will be reviewed to see if any safety measures can be improved. 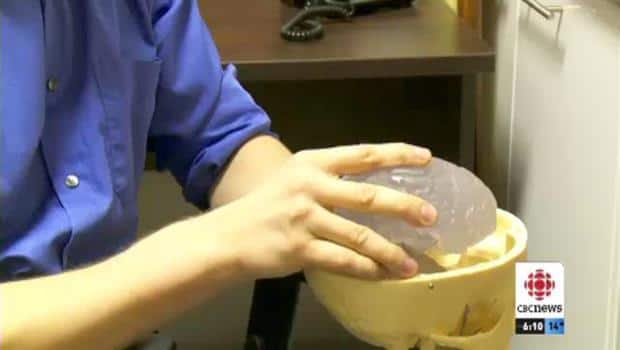 8 years agoVideo
3:23
An Ottawa doctor says he'd like to see a pre-game check to help avoid deaths like Rowan Stringer's. 3:23

The death of an Ottawa teen who suffered a severe head injury during a rugby game last week will be reviewed to see if any safety measures can be improved, says the head of the Ottawa-Carleton District School Board.

Jennifer Adams, who is with the OCDSB, said the board's coaches take precautions to ensure student athletes aren't playing with injuries, but those precautions will be reviewed following the death of John McCrae Secondary School student Rowan Stringer.

Stringer, 17, was captain of the school's girls' rugby team this year, and also played with a Barrhaven rugby club.

She was tackled hard during a game last Wednesday, flew through the air, and hit her head and neck on the ground, according to her father, Gordon Stringer. Rowan stayed awake for a few moments after sitting up, then slipped into unconsciousness and never woke up.

She died on Sunday night after her family decided to discontinue life support the previous day.

Stringer's parents said Rowan told them she had been hit in the head in a game a week before the fatal tackle, and that she took a pain reliever afterward for a headache.

Then, just two days before the fatal injury, she was hit in the head during a game once more, her parents said. This time, she told her friends about it, but didn't tell her parents.

The Stringers said doctors are looking into the possibility that Rowan suffered a lesser head injury that could have contributed to the severity of the second.

The family authorized an autopsy to find out more about what happened to Rowan.

"If they can nail down a little bit more of what actually was going on during those first days … then they'll have a better idea in the future what to look for," said Gordon Stringer.

Adams said she couldn't say if Stringer's coaches asked Rowan about any injuries, but she said coaches are trained to watch for signs.

"Our coaches are involved in safety courses that teach them to be asking those types of questions, and we certainly focus on that aspect of safety in our schools," Adams said.

"I know at my school there's a definite desire to go to more clinics," she said.

"They're on weekends — well, a lot of times we're coaching on those weekends. They are often in the spring — well, that's the rugby season. It would be nice to have options through the winter."

John McCrae Secondary School principal Tom Schultz said the school's rugby team will be disbanding for the rest of the season.

He said the decision wasn't made out of safety concerns, but because "their hearts are broken."

The 33-team league, which features several tiers of competition, had just started its spring season.

The Ottawa Catholic School Board denied an unconfirmed report one of its high schools was disbanding a rugby team this season as well.

Teen had been accepted into nursing program

Rowan's family members decided to honour their daughter's wish to donate her organs, partly because of her interest in nursing and helping children. She had been accepted into the University of Ottawa's nursing program.

Her lungs were sent to help a 20-year-old woman in Toronto, Rowan's father said.

Her kidneys went to The Hospital for Sick Children in Toronto. Her pancreas was also sent to Toronto.

"Then we turned our whole focus to her wish of helping others," said her father.

"It was no longer how hard it was on us. Her liver went to London and her heart stayed here in Ottawa," he said.