Replacing signs expected to cost about $60,000 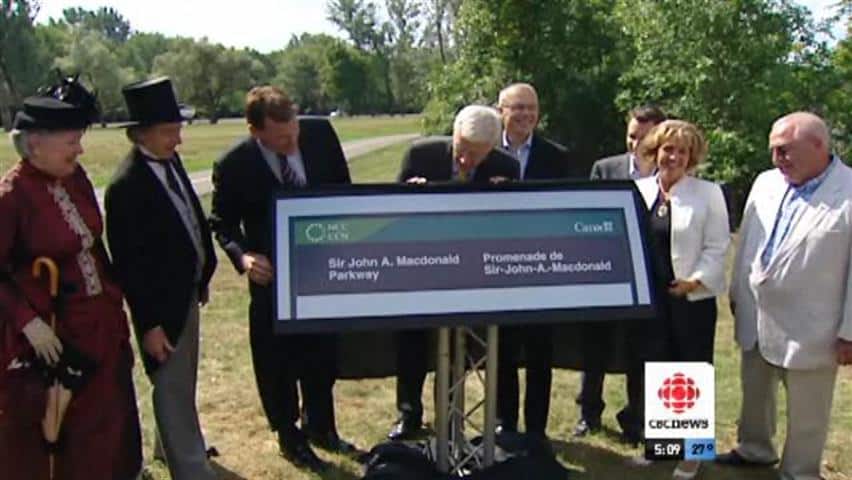 8 years agoVideo
1:51
The Ottawa River Parkway has been renamed the Sir John A. Macdonald Parkway by the NCC. 1:51

The Ottawa River Parkway will be renamed the Sir John A. Macdonald Parkway, after Canada's first prime minister.

Foreign Affairs Minister John Baird, who is also the minister responsible for the National Capital Commission, made the announcement Wednesday close to the parkway near the Deschênes Rapids.

What do you think of the change? Vote in our poll

The road stretches west to east and weaves along the Ottawa River shoreline from Carling Avenue to Booth Street, where it turns into Wellington Street.

The NCC said it will cost about $60,000 to change the names of four major parkway signs. Maps and other signage will be changed as part of regular life cycle renewal efforts.

No other names were considered for the parkway, said NCC chief executive Marie Lemay. The NCC board approved the change in June.

Two years ago, Ottawa historian Bob Plamondon pushed for the City of Ottawa to change the name for Wellington Street, where the Parliament buildings are located — to Sir John A. Macdonald Boulevard.

Wellington Street is named for the Duke of Wellington, the British statesman who pushed for the creation of the Rideau Canal.

Plamondon said he's happy with the compromise to change the parkway's name.

"For the next 150 years, anyone who's coming onto the Sir John A. Macdonald Parkway, who bothers to get to know him a little bit better and understands what he did for Canada, and why he's as relevant today as he was 145 years ago, I think there's a payoff," Plamondon said. "I think lots of people care."

The parkway is the second major piece of public property to be renamed after Macdonald this year.

On Jan. 11, the former Bank of Montreal building at 144 Wellington St. was renamed the Sir John A. Macdonald Building.