Claiming that wider access to Tasers will improve safety for both police and the public, the Ottawa Police Services Board approved a plan that will see the force acquire 800 of the weapons by the end of 2019.

The Ottawa Police Services Board has voted in favour of a plan to put Tasers into the hands of 800 officers by 2020.

The plan will roll out in three phases — Monday night's vote approved the first two of them — and would then continue on an ongoing basis. The first phase calls for 400 conducted electrical weapons manufactured by Taser International, each costing about $2,800, to be purchased this year. The second phase will see the purchase of another 400 weapons in 2019.

In total, the first two phases will cost about $2.25 million, which the city will pay in annual payments over the next five years.

A third phase would see another 250 Tasers purchased in 2020. And by 2021, when the force plans to buy another 30 weapons for new recruits, the police service will have acquired 1,080 new Tasers. The idea is to make the weapon part of every sworn officer's kit.

But because the weapons have a recommended lifecycle of just five years, the police force will soon be retiring the millions of dollars of equipment the board agreed to buy. 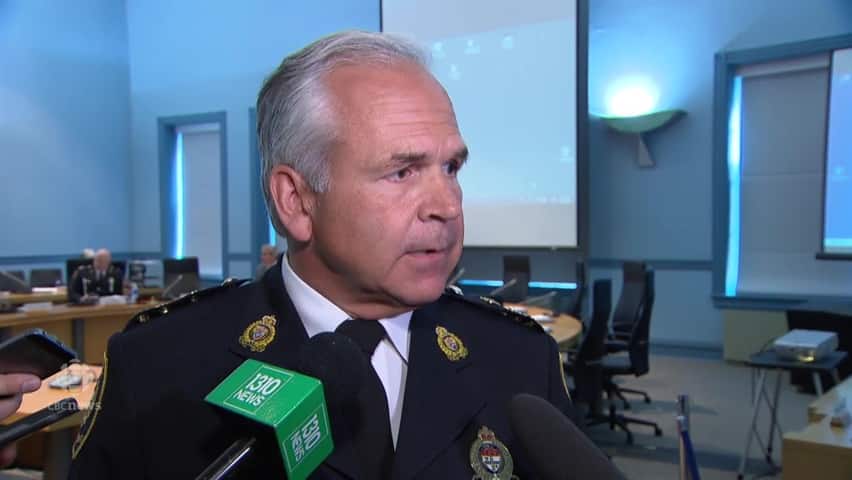 Ottawa's police chief on the need for more Tasers

'It's been very effective,' chief says

Police Chief Charles Bordeleau said arming officers with Tasers will help front-line officers prevent situations from escalating to the point where they might have to rely on other, potentially deadlier weapons.

"It's a weapon that's considered less than lethal and it's been very effective every time that we've used it," Bordeleau said.

Administrators preferred equipping each officer with his or her personal Taser, as they do with service pistols, instead of instituting a system that would require officers to sign out the weapons from a central inventory, Bordeleau said.

He pointed to data showing that the more widely the weapons are distributed among officers, the more likely one will be available when needed.

In 2014, the average time it took for officers equipped with CEWs to show up at calls, from the time they were dispatched to the time they arrived at scenes, was about 15 minutes. A pilot project expansion that put an additional 100 weapons into the hands officers dropped that time to 5.7 minutes by 2017.

The police service hopes to see that response time drop to zero by 2021.

Ottawa police claim that wider access to the weapons will improve safety for officers and the public, and that having more Tasers available won't change de-escalation techniques.

They point to internal data showing that Taser use has declined since an 84-per-cent spike in 2015 (the year more officers were given access to them).

The only public delegation at the meeting came from Heather Stecher, who has a hearing impairment.

In a passionate five-minute address to the board, she expressed concern that officers might "taze" her if she couldn't hear their instructions.

"None of you would want 50,000 volts, or however many volts it is, through your brain," she warned.

But Bordeleau and Coun. Eli El-Chantiry, chair of the board, insisted that de-escalation techniques will remain an officer's first priority.

El-Chantiry said he's confident officers will use their de-escalation training before reaching for their Tasers.

"Rest assured, if our members can de-escalate the situation, that's their priority and that's their direction," he said.