At the Canada Aviation and Space Museum visitors can see Second World War bombers, jet fighters and the Canadarm. Take a tour of the museum's warehouse, however, and you'll find examples of decidedly simpler aviation technology.

This is part of our series Hidden Treasures, where we delve into the storage rooms of museums across the National Capital Region to find out what weird and wonderful things they have tucked away there. We'll post a new story every Wednesday throughout the summer, and you can find them all on the CBC Ottawa website.

Take a tour of the museum's warehouse, however, and you'll find examples of decidedly simpler flying machines.

The museum's collection collection includes some 60 kites, but they've been out of public view since they were donated 15 years ago.

"We have never been able to show them, because if you display them you fade the colours," said Rénald Fortier, the museum's aviation curator. 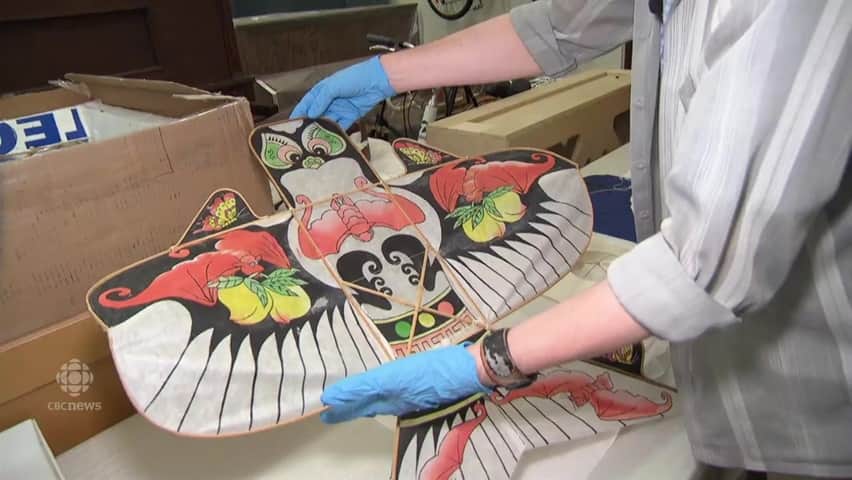 2 years ago
2:19
The Canadian Aviation and Space Museum can't put its kite collection on public display because of the extreme fragility of the artifacts, curator Rénald Fortier said. 2:19

Fortier said kites play an interesting role in the history of aviation, and are universal: they're present in cultures all over the world, and have been around for centuries.

"It's quite possible that kites were invented in many places around the world," he said.

The museum's kites are mostly from Asia, with a few from Central America. Fortier said some were used for fun, but others had practical purposes. Some were used as scarecrows, and others to fish.

Before airplanes took over the skies, kites were even used to give warring armies a clearer picture of the battlefield.

"Some of them were used to lift observers in the late 19th or [early] 20th century over the battlefield," Fortier said.

Part of the museum's vast collection will go into storage at a new facility currently under construction next to the Canada Science and Technology Museum, but the kites will stay hidden away, along with countless other interesting artifacts.

"Most of what we have is not on display," Fortier said.