Ottawa man caught up in 2-year tussle over birth name

What's in a name? For Claude Therien, the one on his birth certificate, which follows a centuries-old French-Catholic tradition, has led to no end of problems obtaining a Canadian passport.

It's a tradition as old as the Bible itself, but for one Ottawa man, it's meant two frustrating years of trying to restore his good name.

When Claude Therien needed to replace his lost and expired passport in 2016, the 68-year-old submitted his birth certificate to Passport Canada to prove his Canadian citizenship.

I've always used one name in my life.- Claude Therien

Therien was raised in a traditional French-Catholic family, and his baptismal name follows the centuries-old religious tradition of naming boys after Joseph, husband of Mary, mother of Jesus.

(For the same reason, many French-Catholic girls are named Marie on their birth certificates.)

According to tradition, that biblical moniker is followed by a godparent's name — in Therien's case, Louis — a given name and finally, the family name, accidentally given an extra "r" by Therien's father. 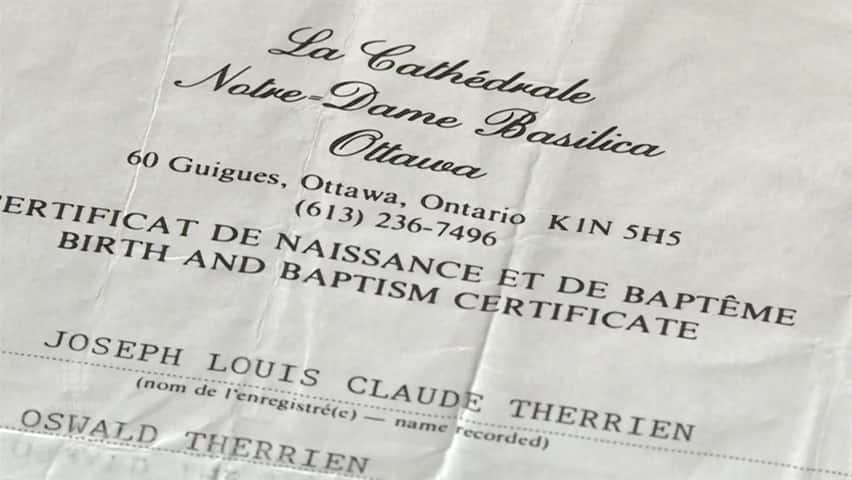 2 years ago
1:05
Claude Therien's French-Catholic given name is 'Joseph Louis Claude Therrien' but his parents always intended on calling him 'Claude.' For more than two years he's been in a battle to get it straightened out with the government. 1:05

His parents always intended for him to be called Claude, and indeed the name Claude Therien appears on dozens of pieces of identification old and new, including his driver's licence, SIN card, business cards and racketball club membership.

"That would make my father, myself and all my four brothers Joseph," Therien pointed out.

To prove his point, Therien pulled out a box of documents and photographs, including one baby picture inscribed on the back with the words, "Claude à 71/2 mois" in blue ink.

And for two years, Service Ontario has told him that if he wants Claude Therien on his birth certificate, he'd have to legally change his name.

Therien is concerned about the confusion his new passport might cause at the border, since the name on it doesn't match any of his other ID.

But to him, this is more than a case of inflexible bureaucracy.

He believes Service Ontario's intransigence signals the provincial government's ignorance of and disrespect for Franco-Ontarian traditions, particularly Catholic ones.

"It's [about] more than just a tradition," said Father Claude Thibault, a priest in Cornwall, Ont.

"It's also an insult to the French language."

In his parish, Thibault asks the secretary to underline a child's given name on the birth record, though he admits it hasn't been a very effective solution.

"When I heard someone was making a stink about it, I said, 'Good.'" Thibault said of Therien's struggle.

"The government should have some way to restore the order of the names and recognize it."

It turns out there is such a workaround, though for two years, no one thought to inform Therien.

According to Shannon Ker, a spokesperson for Immigration, Refugees and Citizenship Canada, the ministry responsible for issuing Canadian passports, "applicants can choose to drop or invert one or multiple given names from [their birth] certificate, provided the name requested for printing on the passport is supported by the name on another acceptable piece of identification, such as a driver's licence."