An Ottawa brewery known for its Pink Fuzz beer is adding a pair of fuzzy friends to its workforce.

An Ottawa brewery known for its Pink Fuzz beer is adding a pair of fuzzy friends to its workforce.

Beyond the Pale at City Centre, near Bayview station, is the first company to participate in the Ottawa Humane Society's (OHS) "working cat" program, which pairs feral cats that aren't suitable as family pets with businesses looking to manage a mouse problem. 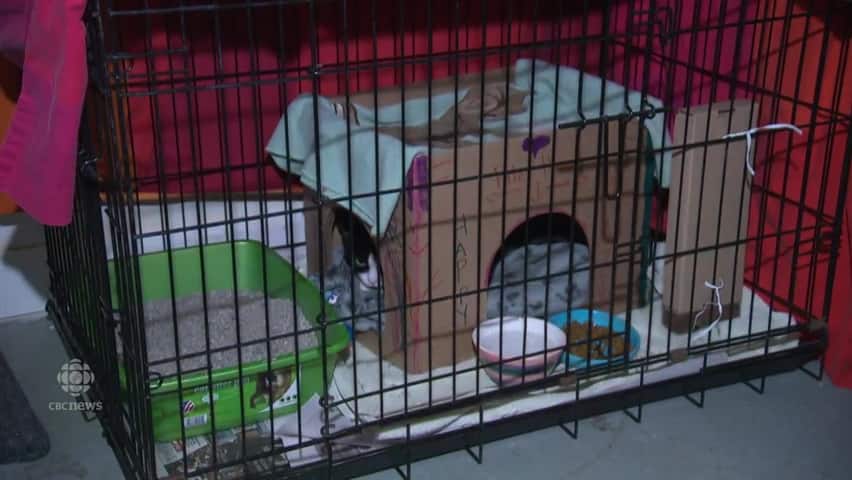 2 years ago
1:12
Al Clark, one of the owners of Beyond the Pale, explains the role of the brewery's new cat. It was acquired through a new 'working cat' program at the Ottawa Humane Society. 1:12

"The new construction [at nearby 900 Albert St.] and the cold weather have increased our mice population, so we decided we'd try this," said Al Clark, one of Beyond the Pale's owners.

"The biggest problem we have is all the grain [in our warehouse]," Clark said. "They'll nibble on a corner of that, and once the bag of grain has a small hole, we have to throw it out. We have lost thousands of dollars worth of grain because of the mice."

Clark had read about a hire-a-cat program in another part of the province and called the OHS to ask if something similar might be in the works here.

The answer was yes, and Beyond the Pale signed up to become the first Ottawa business to try it.

"The program really is designed to reach people who have barns and stables," said OHS outreach manager Allie Holloway. "Breweries are actually kind of an unexpected turn that we hadn't considered."

Killing under cover of darkness

The brewery got its first cat — a shy one-and-a-half-year-old female with black and white fur — on Monday. A second mouser will arrive as soon as the right candidate comes along.

The cats have their own room in an employees-only area of the brewery, where they'll stay during the day.

At the end of the workday, the last person to leave will open the door to the cats' room so they can start their nightly hunt.

"The public won't see them. Probably our employees won't, [either]," Clark said.

If their dislike for human company doesn't keep them out of the brewery's public bar and bottle shop, health regulations will.

The brewery is asking its social media followers to help name its first cat.

Holloway described the program as a win-win-win: the businesses get a handle on their mouse problem, the OHS finds homes for cats that are normally difficult to place, and the cats, who might otherwise be euthanized, get a safe, warm place to live — and plenty of mice to hunt.

"It's a great opportunity for cats to be given a second chance," Holloway said. "It's a nice way for us to be able to safely re-home them and give them something to do that they're naturally meant to do."

With files from Julie Delaney