Another deluge of rain Saturday is forcing more Gatineau residents from their homes, adding to the 850 people across the province of Quebec who have already left due to flooding.

400 soldiers to be deployed across Quebec flood zones, including Gatineau

As rain continued to fall across the national capital region Saturday, some of the more than 400 Canadian soldiers who are being deployed to help with the flooding relief efforts in Quebec arrived in Gatineau.

Between 80 and 100 military personnel will be dispatched to the hardest hit areas in the Outoauais, including Gatineau, which has already seen 399 people forced out of their homes.

The soldiers will also be sent to Pontiac, Que., which is in the process of evacuating residents from their homes, and Gracefield, Que., which declared a state of emergency on Saturday, said Gaetan Lessard, director of civil security for the Outaouais.

They arrived in Gatineau around 8 p.m.

At the time, one unit of troops had been deployed from CFB Valcartier to support local Quebec authorities as they try to prevent damage from the flooding. 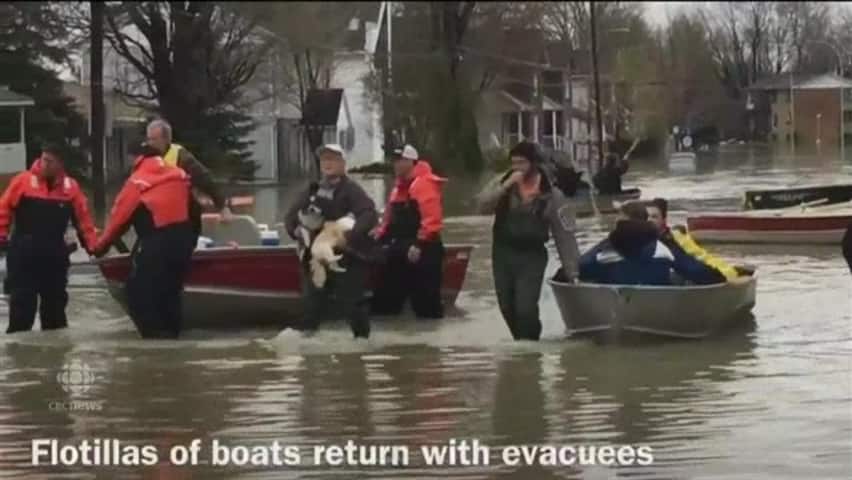 Gatineau residents evacuate due to flooding

4 years agoVideo
0:47
Gatineau residents are evacuating their homes Saturday as the city awaits flood relief from the Canadian military. 0:47

Coiteaux said army personnel are assisting with flood co-ordination, but are not yet on the ground in Gatineau.

He urged residents affected by the flood to heed advice from firefighters who are knocking on doors this weekend.

"If we ask you to leave, it's because of your safety," Coiteaux said.

So far, 219 homes in Gatineau have been evacuated.

Another resident told CBC by phone Saturday that he and his wife surveyed the flooding in and around their neighbourhood from their canoe. Alan, who asked that his last name not be used, said a delivery man tried to deliver some coffee to a man who was pumping water out of his basement.

When the delivery man couldn't reach the home, Alan's wife offered to hand over the coffee using their canoe.

Another deluge of rain Saturday is swelling the Ottawa River and forcing more Gatineau residents from their homes, adding to the 850 people across the province of Quebec who have already left due to flooding.

Another 15 to 25 millimetres of rain is expected to fall Saturday in Ottawa-Gatineau, bringing the total rainfall amount to as high as 70 millimetres, according to Environment Canada. A risk of a thunderstorm could bring that amount even higher.

Jonathan Brennan in Gatineau was overwhelmed Saturday morning trying to save his home from the flood.

"I've been working hard since Monday and it's now Saturday morning," he told CBC News, with this voice breaking.

"It's not that I've failed, I tried so hard. I don't know what to do anymore."

Since May 1, firefighters responding to the flood crisis have knocked on 931 doors to warn people about the flooding risks.

The water level rose 19 centimetres at Gatineau's Kitchissippi Marina since 4 p.m. Friday, according to a post on the city's Facebook page Saturday morning.

With the water level expected to rise another 35 centimetres by Sunday, Mayor Pedneaud-Jobin said on his Facebook page he had made a list of requests for military assistance.

In the nearby municipality of Pontiac, Que., authorities began carrying out a mandatory evacuation order Saturday following nearly three weeks' worth of flooding.

Firefighters were called in to help the most vulnerable people leave their homes safely, and police were ready to intervene if residents refused to leave voluntarily.

The municipality declared a state of emergency on Friday, and by Saturday morning about 60 people had been evacuated, officials said.

The town of Gracefield, Que., also announced a state of emergency Saturday, and Mayor Joanne Poulin told Radio-Canada that there was a possibility the entire town could end up having to leave.

"We are at a point where the streets are not accessible. We know that the situation is getting worse," Poulin said in French.

A major with the Canadian Armed Forces visited the community to assess the situation, Poulin said, and the Canadian Red Cross is expected to arrive on Monday.

With the ground already saturated with water, the city of Ottawa is on track to break rainfall records for two days in a row.

Environment Canada is advising motorists to avoid driving on washed-out roads and for people to move valuable items to higher levels because of the flooding.

The weather agency is forecasting a high of 16 C for Ottawa, with more rain tonight and a low of 6 C.

In the Ottawa region, a special meeting will be held Saturday between 10 a.m. and 4 p.m. at the Clarence Creek Arena in Clarence-Rockland. The city declared a state of emergency on Thursday as the Ottawa River is lapping right up to waterfront homes.