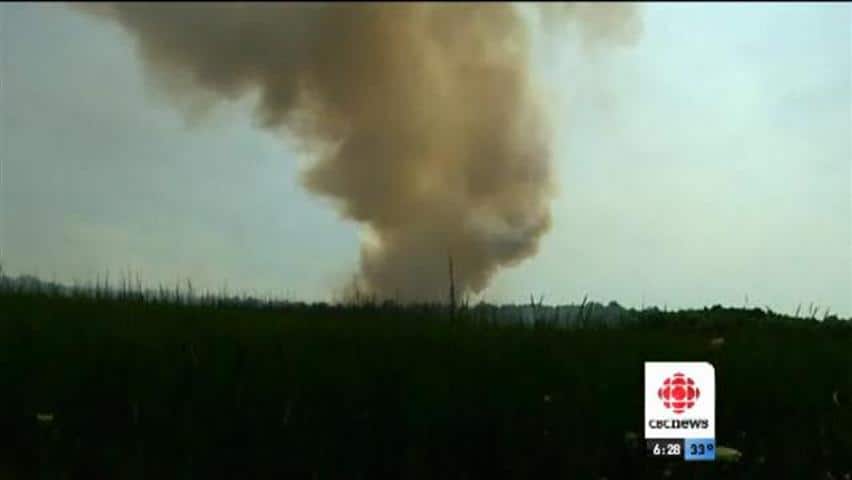 9 years ago
1:10
Firefighters were busy battling a second brush fire in as many days between Moodie Drive and Old Richardson Road on Thursday. 1:10

Firefighters were still putting out hot spots Thursday night after a large brush fire broke out in the afternoon between Moodie Drive and Old Richmond Road, close to Lime Kiln Trail.

Several homes in the area of Richmond Road and Hunt Club Road were evacuated due to heavy smoke, fire officials said, not because of any threat from the fire itself. Residents were later allowed back home.

Meanwhile, four staff members at the Wild Bird Care Centre at 734 Moodie Dr. said they were working on an evacuation plan. About 300 birds are in the centre.

Fire department Marc Messier said "it's a concern" for firefighters, and that they were working to prevent the blaze from spreading to the centre.

No evacuation had taken place by 9 p.m.

A plume of smoke from the fire was visible in much of south and central Ottawa, and as far away as Gatineau, throughout the afternoon. Some people throughout the city reported ashes falling from the sky.

Messier said the fire affected an area of about 40 hectares. Crews were trying to contain it to the north side of the trail, but high afternoon heat, gusting winds and worsening drought conditions weren't helping.

About 60 to 70 firefighters were working on the fire. No one was injured as of early Thursday evening.

The paramedic service sent a bus to the scene, and Salvation Army also sent resources. The fire department's rehabilitation unit was also dispatched to cool down firefighters.

Though several hoses have managed to get to the fire, most of the firefighting is being done by firefighters with water packs on their backs, Messier said.