A man has died in hospital after being struck by a vehicle while he was cycling in downtown Ottawa Thursday morning. Police have released a photo of the driver, who fled the scene of the crash.

A man has died in hospital after being struck by a vehicle while cycling in downtown Ottawa Thursday morning.

Police are still looking for the driver, who abandoned his vehicle and fled the crash scene.

The hit and run happened at about 7:20 a.m. on the westbound lanes of Laurier Avenue W., not far from where traffic from the Queen Elizabeth Driveway merges onto Laurier.

The cyclist, believed to be between 55 and 60 years old, suffered multi-system trauma and severe head injuries after he was thrown off his bicycle, according to Marc-Antoine Deschamps, an Ottawa paramedic spokesperson. 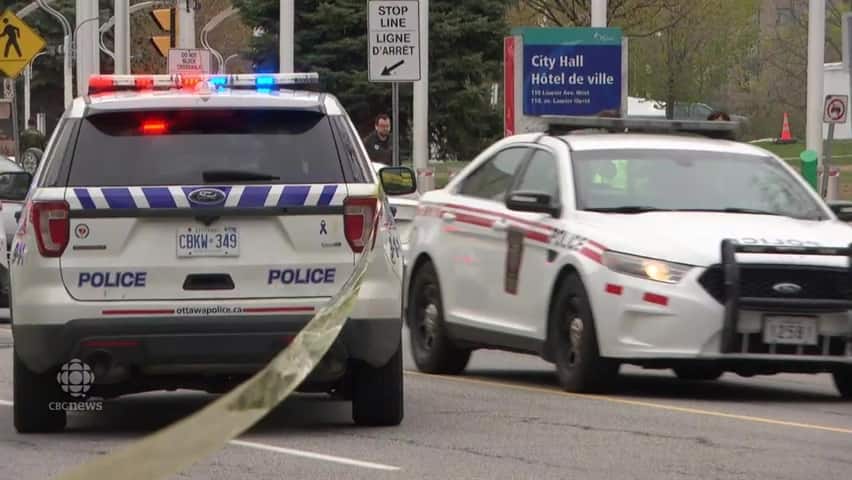 1 year ago
0:27
Speaking Thursday morning, Marc-Antoine Deschamps with Ottawa paramedics said a male cyclist sustained life-threatening injuries when he was struck by a vehicle. The cyclist later died in hospital. 0:27

"He sustained some very significant head injuries," Deschamps said. "Paramedics tried to stabilize on scene and on the way to the trauma centre with life-threatening injuries."

Early Thursday afternoon, police announced the cyclist had died in hospital, and that his identity is not being released.

Can't see the map above? View it here.

The driver of a black minivan stopped on the Mackenzie King Bridge nearby, left their vehicle and fled the scene, according to Ottawa police.

The right front side of the minivan, including the windshield and bumper, suffered extensive damage.

An arrest has not yet been made.

The suspect is described as a skinny man with long black hair standing five feet 10 inches tall, according to police.

He was seen on a surveillance camera at the Rideau Centre, not far from where the van was abandoned, wearing a light-coloured jacket over a hooded sweatshirt, blue jeans and white sneakers with two stripes on the side.

He was also carrying a blue backpack.

Police are asking anyone who might have witnessed the crash or taken photos or video to get in touch with the collision investigation unit at 613-236-1222, ext. 2481.

Several police officers could be seen scouring the area near the Rideau Centre and Westin Hotel in the hours following the collision.

The eastbound lanes of the Mackenzie King Bridge were also closed but they reopened shortly before 1:30 p.m.

The stretch of Laurier where the cyclist was struck has a painted bike lane and is not segregated from vehicles.

Some cyclists posted on social media that the area isn't as safe as it should be given the traffic volumes and speeds of vehicles.

At the rally, Menard referred to the section of Laurier outside City Hall as a "murder strip."

Impromptu rally has started at city hall calling for safer infrastructure for vulnerable road users, in wake of this morning’s hit and run of a cyclist on Laurier <a href="https://twitter.com/hashtag/ottbike?src=hash&amp;ref_src=twsrc%5Etfw">#ottbike</a> <a href="https://t.co/pOuETdRUzI">pic.twitter.com/pOuETdRUzI</a>