Council upholds Château Laurier addition, but will have to vote again Thursday

City council narrowly defeated a last-ditch attempt to block a controversial addition to the Château Laurier hotel on Wednesday afternoon, but a flurry of procedural shenanigans at the end of the debate will see council vote again on Thursday.

City council narrowly defeated a last-ditch attempt to block a controversial addition to the Château Laurier hotel on Wednesday afternoon, but a flurry of procedural shenanigans at the end of the debate will see council vote again on Thursday.

After two hours of debate, council voted 14 to 9 against Coun. Mathieu Fleury's motion to revoke the heritage certificate that allows alterations to the historic building in downtown Ottawa. 2 years ago
1:34
City council narrowly defeated a last-ditch attempt to block a controversial addition to the Château Laurier hotel. 1:34

But in an unusual turn of events after the vote, Coun. Diane Deans tabled a notice for reconsideration.

When moved right after a vote is taken, reconsideration only needs eight votes to be successful, and Deans's motion passed.

Reconsideration would have seen the Château Laurier issue brought up at the next council meeting at the end of August.

However, Mayor Jim Watson seemed ready for Deans's manoeuvre and immediately moved to hold an emergency council meeting on Thursday at 2 p.m.

The reconsideration motion must be moved officially at Thursday's meeting by a councillor who voted with the majority the first time around. Because Chiarelli voted with most of his colleagues against Fleury's motion on Wednesday, the College ward councillor can be the "switcher" who moves for reconsideration.

Despite the lack of an official decision Wednesday, Fleury's motion to revoke the approval for the addition is all but sure to lose.

The mayor said he called a member of the Lalji family — whose company, Larco Investments, owns the hotel — on Tuesday to ask if they'd be willing to make changes to the design.

"It remained clear to me they are not prepared to spend time and money on a sixth design," Watson said, adding he didn't want to spend tax dollars on what would likely result in a legal fight if the approval was rescinded.

He said the Château Laurier is private property, not a government building, and that the city does not have control over the design of the addition. However, as the hotel is an official heritage building, council is legally responsible for allowing alterations.

'Designs have been terrible,' Deans says

The councillors who voted in favour of the motion to revoke the design sounded most like the members of the public who have been loudly decrying it.

"A yes vote means we listened to the community," said Fleury, adding that revoking the approval could have given the community more time to work with the hotel owners on a more compatible addition.

"The designs have been terrible, they've been incompatible ... it's not the right design," said Deans. "All we're asking is a design we can all be proud of." 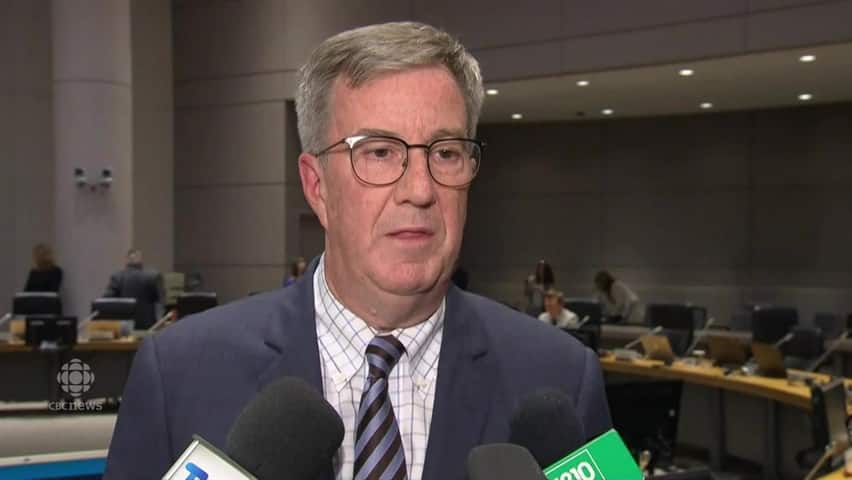 2 years ago
0:25
Ottawa Mayor Jim Watson praised council for defeating a motion to block a controversial addition to the Château Laurier. 0:25

A number of councillors who voted to uphold the addition's approval said they do not like the addition, but were unwilling to try to block it.

Coun. Dudas, for example, called the addition "ghastly," but said she's worried that if council revoked the approval, and the hotel owners won a court challenge, the city could end up with a worse version of the addition.

But Tim Marc, the city's planning lawyer, essentially said that's not accurate. A new plan would have to go through the city's usual process, including council approval.

Council made a mistake, McKenney says

Coun. Catherine McKenney called last year's decision to approve the hotel addition a "mistake," but added "it was one made honestly."

She and other councillors who voted to revoke the approval Wednesday said the former council thought last year's decision would result in a more compatible design, which didn't happen. 'He is so offside' | Diane Deans

2 years ago
0:23
Coun. Diane Deans said Ottawa Mayor Jim Watson is not listening to public opinion when it comes to the Château Laurier debate. 0:23

That view was echoed by recently elected Coun. Rawlson King, who was not part of last year's decision.

"I believe council should never have delegated its authority, it's time to correct this error," King said.

Darouze also agreed that council "failed" in its decision last year, but voted against the motion Wednesday because it wouldn't be fair to revoke the approval from a business owner that has been working with the city in good faith for years.

Late Wednesday, councillors Jenna Sudds, Glen Gower, Matthew Luloff and Dudas — who all voted against the motion to revoke the approval — sent a letter to Larco ask that the owner withdraw its application, appealing to the Vancouver-based firm  as the "stewards of a treasured landmark."