Life is slowly returning to normal for most residents of Ottawa-Gatineau after Friday's destructive tornadoes.

30 homes in Dunrobin slated for demolition

Life is slowly returning to normal for most residents of Ottawa-Gatineau after Friday's destructive tornadoes.

It's now been four days since a pair of twisters hit the capital: one starting in the rural west Ottawa community of Dunbrobin before moving to Gatineau's Mont-Bleu neighbourhood, and the other hitting Nepean's Arlington Woods community before churning east to the Greenboro area.

As of 11:15 a.m. Tuesday, hydro crews have restored power to all but approximately 840 customers in Nepean, 2,950 customers in the Outaouais and 325 customers in areas just outside Ottawa covered by Hydro One.

By Tuesday night, only 109 customers in the Arlington Woods area remained without power, Hydro Ottawa said.

The power utility expected they would be reconnected by Wednesday afternoon.

There are two community support centres set up in Ottawa's hardest-hit areas: the Nepean Sportsplex and West Carleton Secondary School.

The city said the centres will be open from 9 a.m. until 8 p.m. and will allow affected residents to talk to agencies including Hydro One, the Red Cross and the Insurance Bureau of Canada.

As of Monday afternoon, 1,479 people had registered there and all but seven of 212 evacuated buildings had been turned back over to the owners.

By Monday night, 170 people needed a place to stay in Gatineau: 121 at the support centre and 49 in hotels. That's down from 301 on Sunday night.

Buildings damaged beyond repair in Mont-Bleu are starting to be demolished, while Knoxdale-Merivale Coun. Keith Egli said Tuesday morning between 100 and 150 homes will likely have to be demolished in Arlington Woods.

Tuesday afternoon, the city said 30 homes in Dunrobin will need to be demolished and no homes are being demolished at this time in Arlington Woods.

"Housing is our top priority [today] as it was yesterday," said Gatineau Mayor Maxime Pedneaud-Jobin at the support centre on Tuesday morning.

"We were happy that more people than expected got into hotel rooms and things look even better for tonight … It's tough to sleep here, there's no [privacy], it's way better for them to have some sort of comfort in a hotel."

Anyone who needs a shower can go to the Centre aquatique Paul-Pelletier at 325 ch. Aylmer until 9 p.m. or Centre sportif at 850 blvd de la Gappe until 10 p.m. 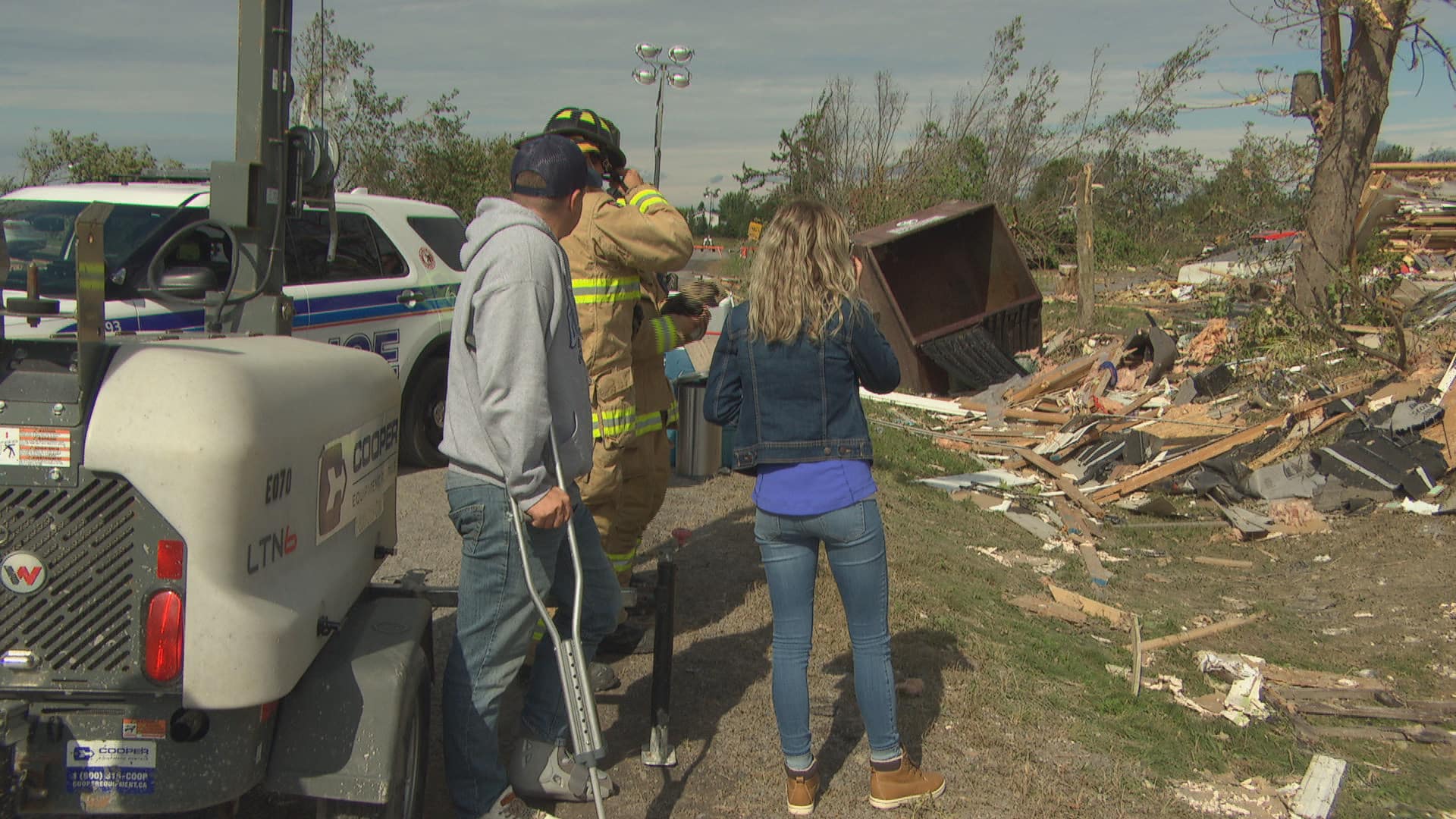 Disaster and recovery in Ottawa-Gatineau

2 years agoVideo
2:47
Residents are combing through the wreckage of their homes and reaching out to help neighbours after tornadoes ripped through Ottawa-Gatineau on Sept. 21. 2:47

Ottawa-Gatineau schools and roads are open again, except in the hardest-hit areas.

There are no classes at Knoxdale Public School or West Carleton Secondary School in Ottawa, nor Hadley Junior High School, École secondaire Mont-Bleu and Philemon Wright High School in Gatineau.

Both cities said their road network is mostly back to normal, with closures still in place on Ottawa's Greenbank Road and Thomas Dolan Parkway.

Federal public servants are heading back to work Tuesday after being asked or told to stay home Monday, depending on their department's circumstances.

The City of Gatineau and the Red Cross have set up two meetings for storm-affected residents who don't have insurance at the salle Jean-Despréz at City Hall. The first happens at 2 p.m. and the second at 6:30 p.m.

There will be free buses running to these meetings from the Père-Arthur-Guertin support centre starting 30 minutes beforehand.

In the Township of Greater Madawaska, where a third tornado hit communities including Calabogie and White Lake on Friday afternoon, residents don't need to buy a fire permit to burn branches and brush until Oct. 9.

The municipal offices on Parnell Street in Calabogie are open again on Tuesday after power was restored there.

Communities are asking that cash donations be made to the Red Cross, which has set up dedicated funds for the area's victims. The Salvation Army is accepting donations of clothing, furniture and household items at its thrift stores.

In Gatineau, donations of clothing, personal hygiene products and non-perishable food are being accepted and distributed from the former Sears store at Galeries de Hull between 10 a.m. and 6 p.m.

On Wednesday, Thursday and Friday, those hours shift from 12 p.m. to 8 p.m.

Residents can toss spoiled food from warm fridges into green bins, or into these bins being provided by the city on a temporary basis:

The City of Ottawa is advising residents not to put storm debris at the curb, but to let their insurance companies to dispose of it instead.