A report before the ministry of post-secondary education says a third of courses in Ontario's colleges and universities should be moved from the classroom to the internet. 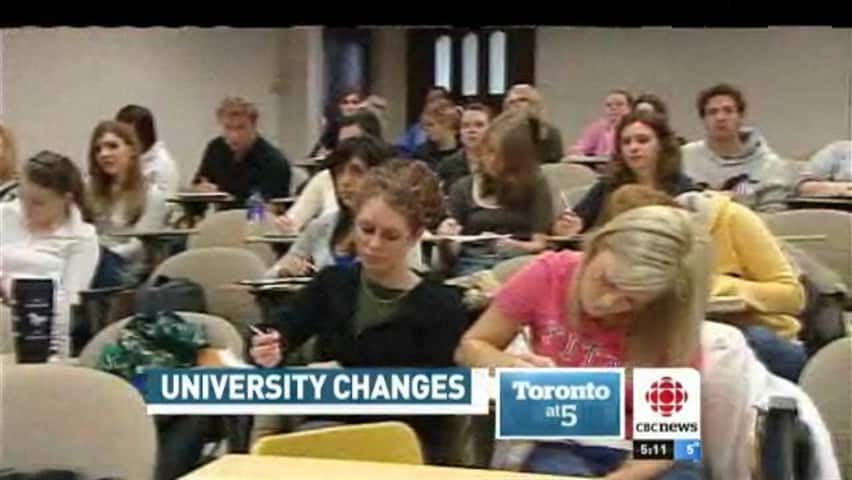 A report before the Ontario government is calling for universities and colleges to move a third of their courses online — a proposal that's received a failing grade from a prominent students' organization.

The draft report obtained by The Canadian Press calls for a shift toward web-based learning that would have students take up to three courses out of five online each semester.

"As the world of online learning expands, Ontario will be at the forefront of this digital, portable and low-cost alternative," reads the document, which was prepared for the ministry that oversees post-secondary education.

It advises that "approximately one-third of courses each year be available online and count toward a student's undergraduate degree."

The courses would be offered through each institution and the province's long-promised Ontario Online Institute, which has yet to materialize even though it was slated to launch last summer.

The policy paper, which hasn't been released to the public, lays out three main strategies meant to "revolutionize Ontario's university system" over the next three years as the province grapples with mounting financial pressures.

Under the plan, participating schools should improve productivity by three per cent for each of three years, the document reads.

Schools that opt out of the program would be required to find three per cent in savings each year.

"Our government can meet its commitments to the public, strengthen our post-secondary education system, provide new and more flexible learning options for students, and reduce budget pressures," the paper reads.

The Ministry of Training, Colleges and Universities was not immediately available for comment.

The proposal isn't sitting well with the Canadian Federation of Students, which said Wednesday the changes would hinder students rather than help them.

"The fact that they're talking about such a massive overhaul without having reached out to faculty or students is cause for concern," said president Sandy Hudson.

"To think that three in five of all courses — the majority of courses in a year that students would be doing — would be online, that is definitely harming the quality of education," she added.

The report proposes changes in the transfer credit system to ensure online courses are recognized, but Hudson said there's no guarantee schools in other jurisdictions will honour those credits.

The organization has spoken out against the prospect of an online university and urged the government to turn the Ontario Online Institute into a web portal that would connect students to courses not offered at their school.

The plan comes as the province weighs a series of austerity measures that could derail education promises made by the governing Liberals during last fall's election campaign, including a 30 per cent tuition grant for post-secondary students.

But some of the strategies in the education report echo Drummond's blueprint for tackling the province's deficit.

The economist suggested the government examine whether working throughout the summer could turn some four-year programs into three years.

Another Liberal campaign pledge involved the creation of three new post-secondary campuses. Officials have since hinted that one such campus could be online.