A lesbian couple in Kingston, Ont., says a card of support received on Monday more than compensates for some threatening letters they got last week.

Community support for women 'a symphony of love' after threatening letters 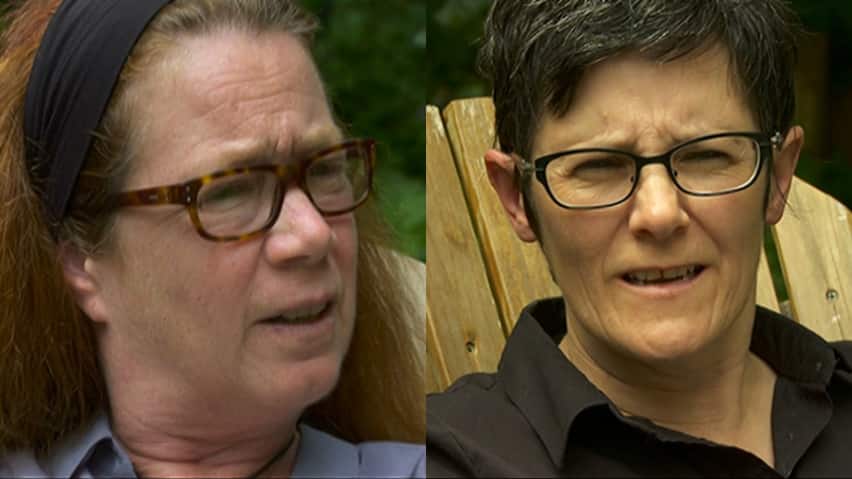 7 years agoVideo
2:19
The community is rallying around a couple who received threatening letters 2:19

A lesbian couple in eastern Ontario says a card of support received on Monday more than compensates for some threatening letters they got last week.

"It's like a symphony of love here, it's crazy," said Susan Belyea, after two rallies were held over the weekend to show support for her and her partner Karen Dubinsky.

That’s not how Belyea and Dubinsky, a same-sex couple who have lived in Kingston, Ont., for almost 20 years, were feeling last week when they received threatening letters.

"I'm suspicious now, and I don't like that," Belyea said.

"I don't like being suspicious of every car that slows in front of the house, or people walking by."

The anonymous letters carried messages such as, "We will watch and wait, and then strike, at home and office, as need arises," suggesting the writers had BB guns. "These are not empty threats. MOVE, or else!"

Belyea and Dubinsky posted the letters on social media and went to the police.

Hate-related charges could be laid

Kingston police said they're looking at a hate-based offence such as uttering threats, along with criminal harassment.

"We feel that our population here within the city of Kingston regarding race, religion, sexual orientation or whatever should obviously be respected," said Const. Steve Koopman.

Mayor Mark Gerretsen said the attitude in the letters doesn't reflect the community as a whole.

"I think that this is a remote incident," he said.

"My first reaction was (to not) respond to it at all, because you're just giving the authors the vehicle that they're looking for, but at the same time we have to look out for the safety of the people involved."

Dubinsky said there's no way they'd leave after the weekend rallies and the massive card full of well-wishes they received on Monday.

And they also say they need to speak out in case other same-sex couples were targeted.

"You can't give it any more credibility than a violent but crazy threat," she said. "No, we're not moving to San Francisco, as lovely as it would be."