Workers with the Ottawa Children's Aid Society are calling on Premier Doug Ford to reverse a $28-million cut to child welfare services.

'We can't afford not to speak out,' say child support workers at protest in Ottawa

Children's aid workers in Ottawa say expected child welfare service cuts in the provincial budget will rob families of vital services, and are asking the Ontario government to reinstate the funding.

The workers, carrying signs and ringing bells, were joined by politicians and union supporters during a protest Monday outside 347 Preston St., which houses the offices of the Ministry of Children Community and Social Services.

Sweeping cuts to family services were announced last May in the provincial budget, with the Ontario Association of Children's Aid Societies estimating as much as $84 million would be slashed from child welfare services — about $28 million coming directly from children's aid.

Michele Thorn, a family support worker with the Children's Aid Society of Ottawa and president of the local chapter of the Ontario Public Sector Employees Union, said at Monday's protest that the cuts work out to about $1.5 million in Ottawa for children's aid.

Seven front-line positions at the society have been eliminated and employees taking maternity leave are not being backfilled, Thorn said.

She's worried about increased case loads, employee burnout, a lack of resources and that children in need will fall through the cracks.

"We have fewer workers now to do the job to help protect our children and work with families to make better outcomes for them." Thorn said.

"This is also going to put more children at risk of coming into care." 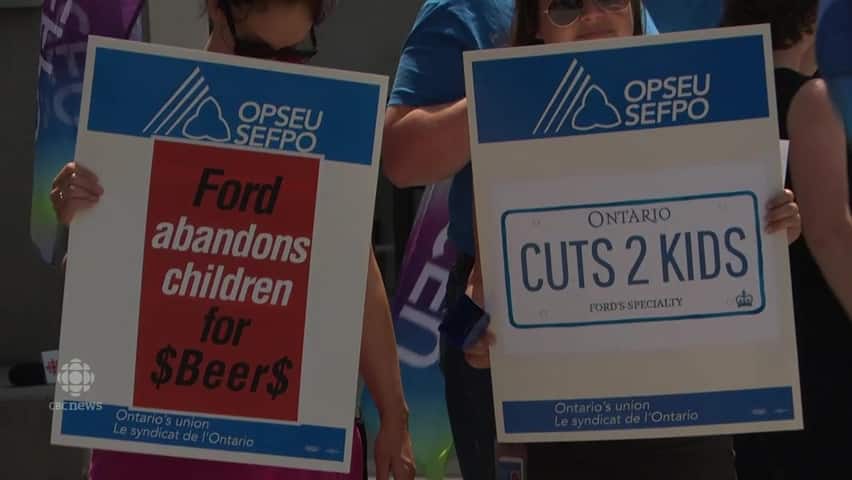 1 year agoVideo
1:05
Front-line workers, politicians and union supporters bring their protest against provincial government cuts to child services to the streets of Ottawa 1:05

Chrissy Tremblay, who was also at the protest, said she worked as a family support worker for 18 years with the Children's Aid Society until learning in May that her position was eliminated.

Tremblay wants the government to know that funding cuts may result in long-term social implications if families aren't supported when they are in crisis.

"We can't afford not to speak out," Tremblay said. "We're losing all these vital services for our families."

Leandro Silva-Stone, a child-protection worker, said he sees families struggling because budget cuts have led to the loss of a number of health and social services.

"We are the ones in people's homes every single day," he said. "We hear directly from our clients and it's heartbreaking," Silva-Stone said.

He said that recently, Premier Doug Ford has begun to reverse some of the province's more unpopular budget cuts after public pushback.

"It's a very wishy-washy government," Silva-Stone said. "Hopefully they will do as they've been doing, which is just take a step back and think, and maybe speak with those who actually know what they're talking about."