Ontario beekeepers say poor winter weather has decreased the size of their colonies, which will reduce the amount of honey they'll be able to produce.

Ontario beekeepers say poor winter weather has decreased the size of their colonies, which will reduce the amount of honey they'll be able to produce.

The Ontario Beekeepers' Association surveyed about 900 beekeepers across the province and found 70 per cent suffered unsustainable losses. More than 40 per cent said the recent long, cold winter that extended into spring was the main culprit.

"Approximately 70 to 80 per cent of beekeepers are losing more than 20 per cent of their hives," said association board member Dennis Edell.

"Twenty per cent tends to be the number that we look at as a sustainable number of losses — in other words, losses that beekeepers can make up for and not incur additional expenses."

Beekeepers usually do hive inspections after the spring, but this year it's been pushed back about four weeks because of the weather.

"Typically we get some warm breaks in March and bees are able to fly. But we haven't seen a warm break since February," he said. "That's not good for bees. It's definitely a heavy stress factor for them."

From bad to worse

For commercial beekeepers, Edell said it's been an especially difficult season because last year's weather also played a role in reducing colony sizes.

"We had a very wet year and it tended to rain during the blossom time, so the honey crop was very sparse and many beekeepers had a crop failure in terms of honey production."

Beekeepers now trying to recover their crops will find it challenging, he added.

"Queen breeders in Ontario that produce queens and produce what we call nukes or nucleus hives — that they sell to replace hives that have been lost over the winter — are pretty much ... in a sold-out position. So beekeepers are going to be struggling to recover their colony numbers.

"So it's a double whammy. They've lost income last year, they're going to lose their income this year, and it's going to be very tough for them to get through the year." 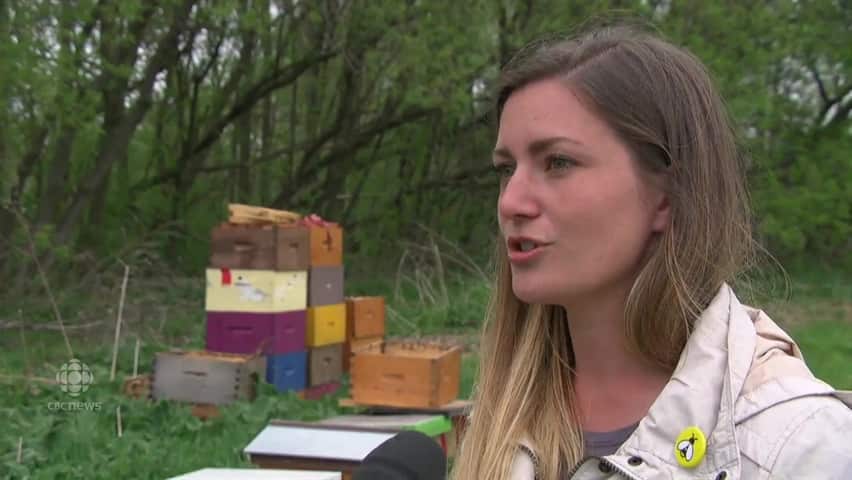 3 years ago
0:42
Marianne Gee, co-owner of Gees Bees Honey Company, says high mortality rates are affecting the entire industry, making it difficult for beekeepers to rely on each other. 0:42

'Difficult for beekeepers to rely on each other'

Marianne Gee, who co-owns the Gees Bees Honey Company in Dunrobin, west of Ottawa, is also experiencing a serious decline in bee numbers.

It's hard to get help from other beekeepers when the entire industry is suffering at once, she added.

"When the industry as a whole is seeing increased mortality, it's more difficult for beekeepers to rely on each other. If it was just one [beekeeper], then you can usually buy colonies off another beekeeper."

Pesticides have also been linked to decreasing bee populations in the province.

Neonicotinoids cause bees to become disoriented, and to develop tremors and other neurological problems that often lead to their deaths.

The Ontario Beekeepers' Association has asked the province for funding to help beekeepers recover and rebuild colonies, like they did when pesticides killed off their bees in 2013 and 2014.

"[When] the pesticides issue came up and they confirmed that neonicotinoid pesticides were killing bees in Ontario, [the] Ontario government did step up with a beekeeper's financial assistance program," said Edell.

"We're hoping we can get that program back."