The last-known first-generation graft taken from the original McIntosh apple tree died this summer, but not before Ontario horticulturalists took a dozen cuttings in hopes of cloning the plant. 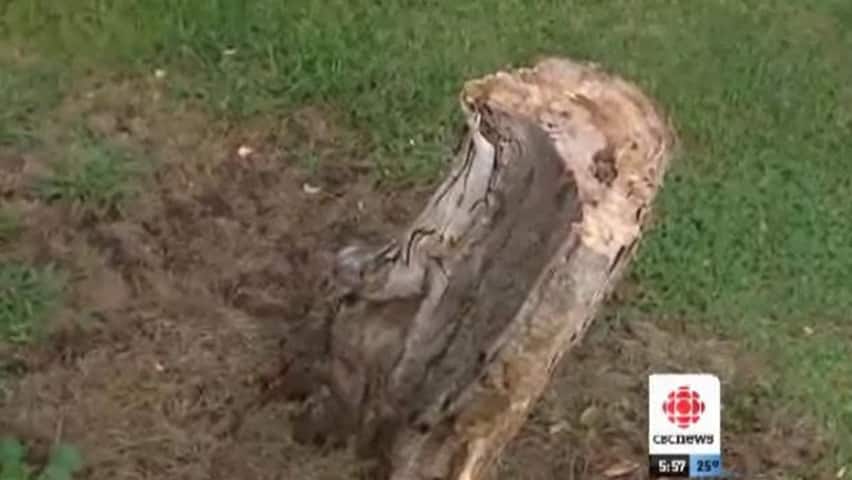 9 years ago
2:09
Horticulturalists hope to clone the oldest descendant of the original McIntosh apple tree near Ottawa. 2:09

The last-known first-generation graft taken from the original McIntosh apple tree died this summer, but not before Ontario horticulturalists took a dozen cuttings in hopes of cloning the plant.

The 150-year-old tree in Dundela, Ontario was cut down on July 25 after it lost its leaves, said Sandra Beckstead, the great granddaughter of Samuel Smyth, who grew the tree from cuttings taken from the original McIntosh.

"We were just so dry this summer, there was not enough water and moisture," said Beckstead. "It leafed out, but then that was it."

The McIntosh apple, with its distinctive red and green colouring, traces its roots to a tree found growing wild in 1811 on a farm in the eastern Ontario hamlet of Dundela, about 70 km southeast of Ottawa.

John McIntosh took that tree and cultivated cuttings or grafts, out of which grew generations of McIntosh trees. The original tree died in the early 1900s.

But Smyth, who worked for McIntosh, had also taken branches from the tree and grafted them to roots to clone his own McIntoshes.

Over the years, Smyth's Apple Orchard, now run by Beckstead and her husband, has grown to a 24-hectare farm, and the McIntosh, now in its 200th year, is now grown across eastern Canada and the United States.

When the last of the trees from the original cuttings died this year, Beckstead said it was hard to say goodbye.

"I stayed away, my daughter took the pictures," she said. "I couldn't even watch."

Before the tree was cut down, horticulturalists from Upper Canada Village in nearby Morrisburg, Ont., paid a visit to the orchard and took a dozen twigs from the tree and grafted them to root stock.

Brian Henderson, the lead horticulturalist with Upper Canada Village, said three of the plants have taken root and are now growing outside in a fenced garden at the heritage park.

Henderson said he was hoping more trees would have grown from the cuttings but said he'll do his best to keep the ones he has thriving.

"When they are tall enough we will transplant them into the village and to the orchard," said Henderson.

Beckstead has fond memories of the old tree, which produced three bushels of the apples in 2010, the last year it bore fruit.

Beckstead said while there are some 35 variations of the McIntosh in circulation now, the original was distinct.

"They were much crispier, stayed fresh longer, they were the true McIntosh," she said of the fruit from that year.

The nearby community of Iroquois is celebrating the 200th anniversary of the McIntosh on September 17.

With files from the CBC's Rebecca Zandbergen