Supporters of Abdirahman Abdi — a Somali-Canadian man who died after a violent arrest by two Ottawa police officers in 2016 — reacted with a mixture of sadness and outrage after one of the officers was acquitted of all criminal charges Tuesday.

Hundreds of people gathered at downtown park for rally

Supporters of Abdirahman Abdi — a Somali-Canadian man who died after a violent arrest by two Ottawa police officers in 2016 — reacted with a mixture of sadness and outrage after one of the officers was acquitted of all criminal charges Tuesday.

Const. Daniel Montsion was found not guilty of manslaughter, aggravated assault and assault with a weapon in a judgment rendered by Justice Robert Kelly of the Ontario Court of Justice. Kelly ruled the Crown failed to prove beyond a reasonable doubt that Montsion's actions caused Abdi's death.

"Today was nothing short of catastrophic," said Farhia Ahmed, the outgoing chair of the Justice for Abdirahman Coalition, a grassroots group of activists and community members formed in the days following Abdi's death.

"This ruling officially places police officers above the law and essentially gives them unhindered permission and powers."

Speaking to a rally of about 200 people at Confederation Park in downtown Ottawa Tuesday evening, a visibly emotional Ahmed said the ruling had done irreparable harm to the Abdi family and to relations between police and the city's most vulnerable.

"Today was a demonstration and a stark reminder that this so-called justice system continues to fail to protect a certain segment of the population, in particular Black, Indigenous and racialized people," Ahmed said.

Abdi, who struggled with his mental health, died of cardiac arrest following a violent altercation with Montsion and Const. Dave Weir on the front steps of the Hilda Street apartment in Hintonburg, where the 37-year-old Abdi lived. Weir chased Abdi there from a nearby Bridgehead coffee shop after reports that Abdi was assaulting women.

We have heard the calls for change to the way we police.- Ottawa Police Service statement

Montsion had been called to the scene as backup and punched Abdi several times in the head upon arriving while wearing reinforced or "plated" gloves.

The Crown's lawyers argued Montsion used excessive force and showed "wanton or reckless disregard" for Abdi's life. The judge disagreed, saying he wasn't convinced that Montsion used unreasonable force or that what he did was unjustified under the Criminal Code.

Abdi's death shined a light on police treatment of Black, Indigenous, and people of colour and strained relations between police and minority communities. It spawned a movement, driven in part by the Justice for Abdirahman Coalition, that led to increasingly loud calls to reform and defund police.

The coalition has challenged racism in the policing and justice systems in Ottawa and Ontario. The group called for greater transparency and accountability from law enforcement agencies, and for better police handling of mental health-related calls. 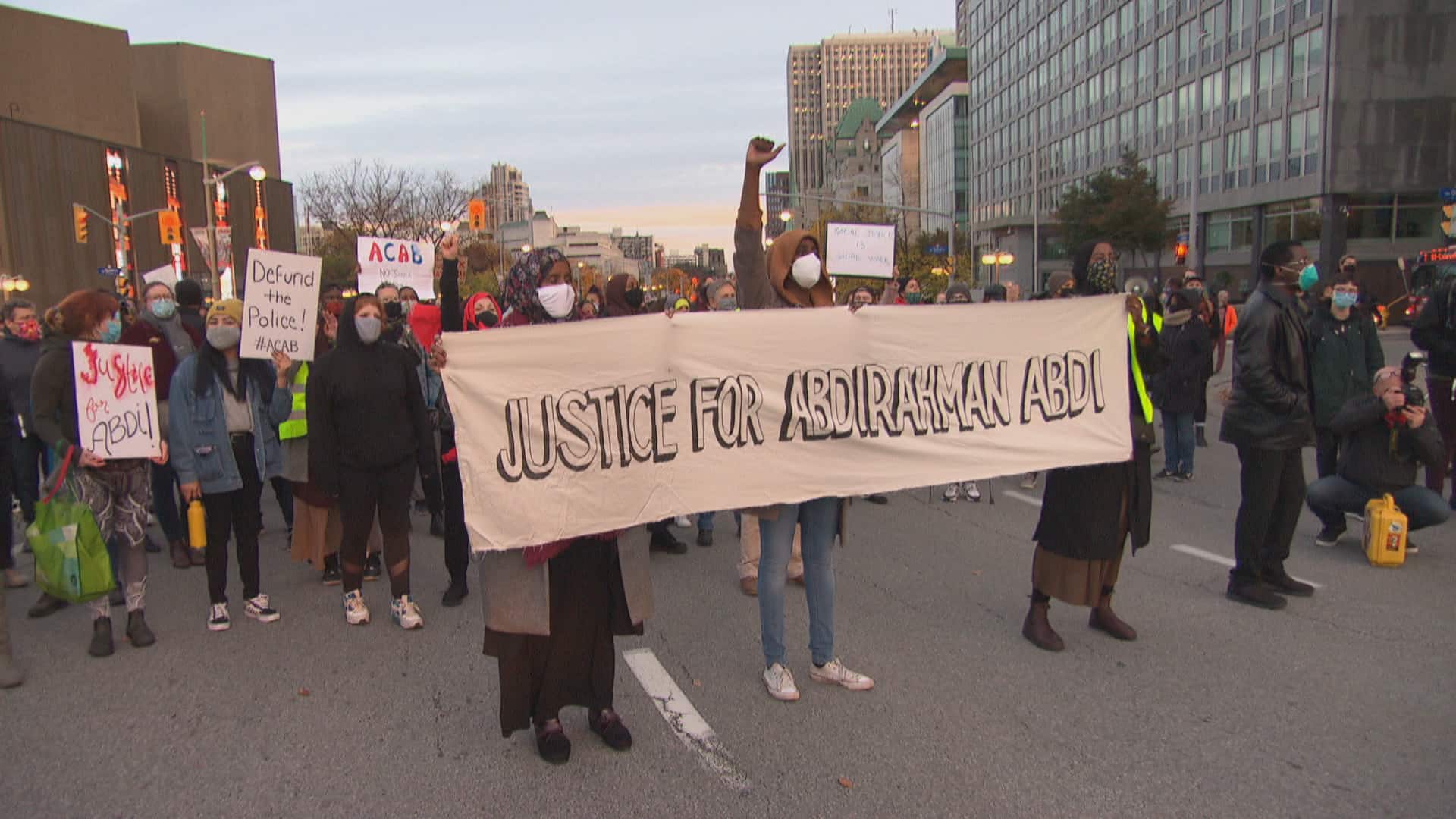 3 months agoVideo
1:58
Hundreds of people marched in Ottawa Tuesday night after Const. Daniel Montsion was found not guilty of manslaughter, aggravated assault and assault with a weapon in the 2016 death of Abdirahman Abdi. 1:58

Ahmed expressed frustration at a lack of progress on legislative and other policy changes demanded by the coalition and like-minded advocacy groups.

The Abdi family has launched a $1.5 million lawsuit against the Ottawa Police Services Board, former Ottawa police chief Charles Bordeleau, and officers Montsion and Weir. 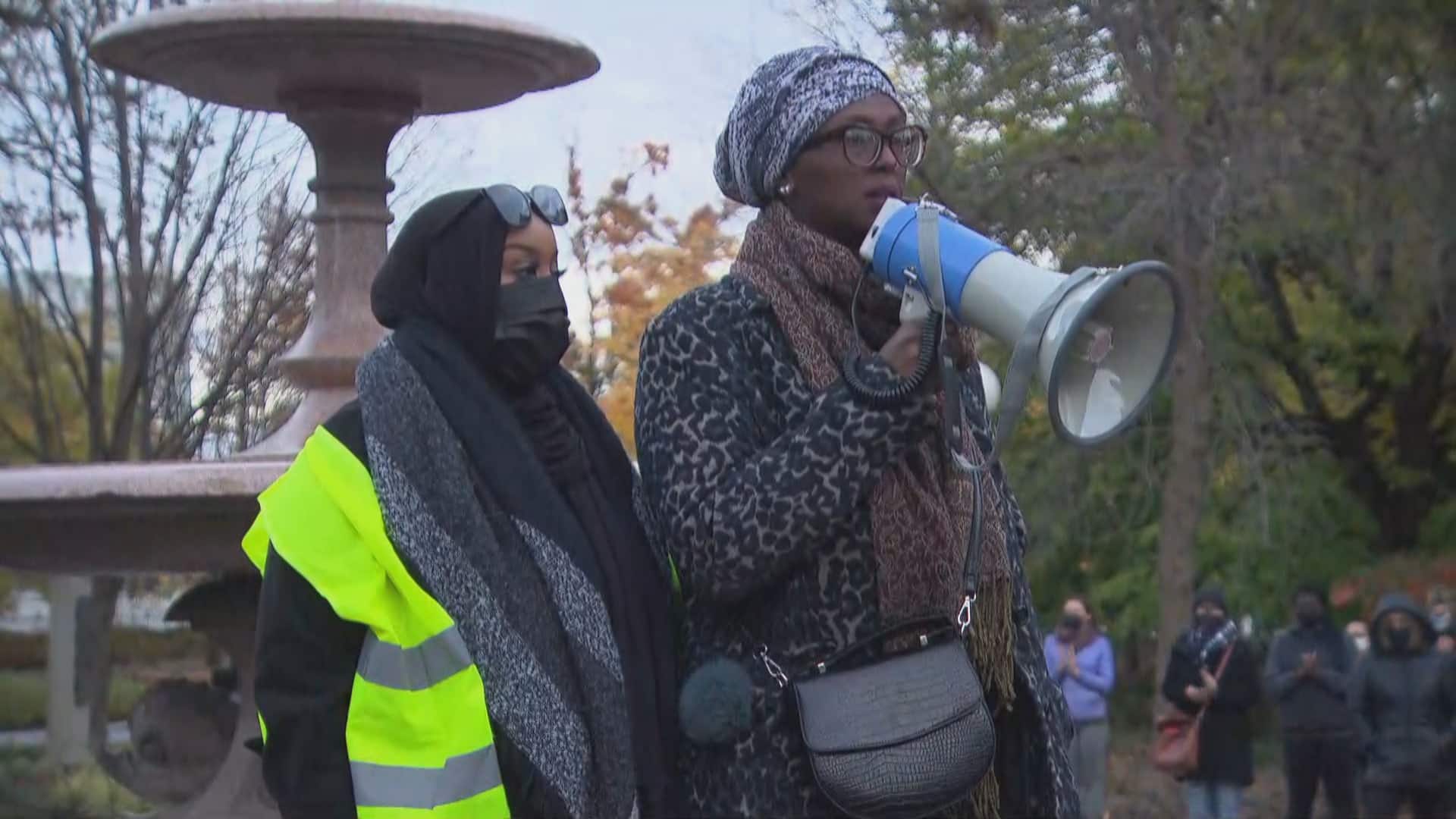 ‘This is where it starts’

3 months agoVideo
2:19
Dahabo Ahmed Omer, co-founder of the Justice for Abdirahman coalition, called on Ottawa residents to continue to fight for justice after Const. Daniel Montsion was acquitted of several charges related to the 2016 death of Abdirahman Abdi. 2:19

After the ruling, the Ottawa Police Service (OPS) released a statement saying it respects the court's decision.

The service is conducting an internal review of the incident in accordance with the Police Services Act, which it promised to conclude "expeditiously." The results will be made public through the Ottawa Police Services Board.

OPS also pledged to move forward with ongoing reforms to address mental health, race and gender, and said it would do so in collaboration with community partners.

"We recognize the environment in which we deliver service and we have heard the calls for change to the way we police," the statement said. "Those calls for change go beyond the events surrounding this trial."

Ottawa Police Association president Matt Skof said he was relieved to hear Montsion was found not guilty and called the charges against him "very politically motivated."

"[The charges] were inappropriate back then and obviously, fortunately, the judge has agreed."

Skof called Abdi's death a tragedy no officer would want to see happen, but believes if the same call was made today, the police response would be the "exact same."

"The tragic incident involving Abdirahman Abdi, which happened over four years ago, has of course been especially heartbreaking for Mr. Abdi's family and friends within the local Somali community," said Mayor Jim Watson in a statement.

"Today, my primary thoughts go out to Mr. Abdi's family and friends for their devastating loss."

WATCH | Mayor calls for Ottawa community to pull together after trial decision: 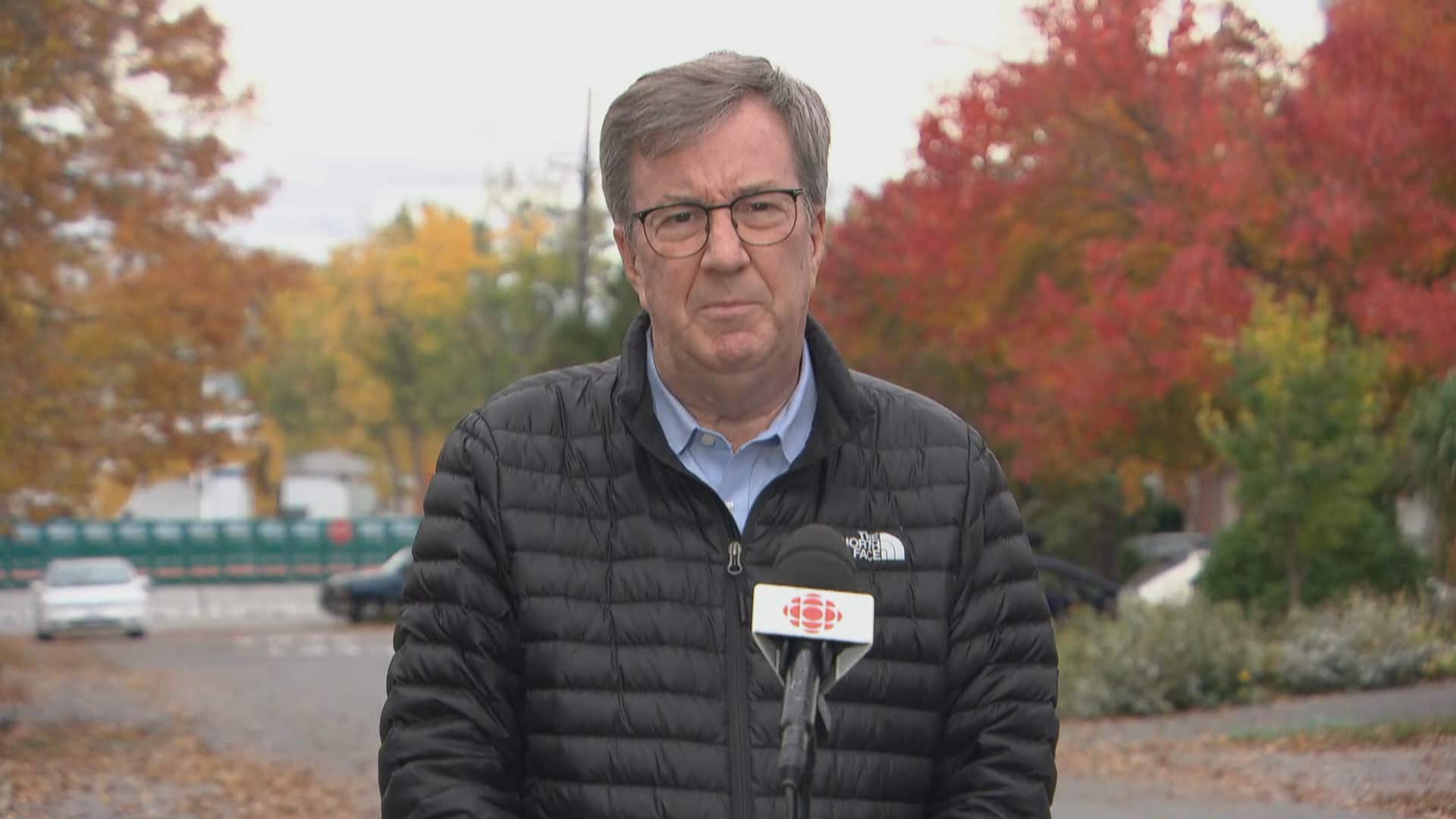 3 months agoVideo
1:06
Mayor Jim Watson says it’s up to leaders in the community to “heal the rift” created by the death of Abdirahman Abdi, who died after an altercation with police in 2016. Const. Daniel Montsion was found not guilty of manslaughter, aggravated assault and assault with a weapon in Abdi’s death. 1:06

While Watson expressed his faith in the justice system, he called Montsion's not-guilty decision a moment "to reflect on the changes we need to continue to commit to."

The Ottawa Police Services Board said in a statement it "recommits" to changes within policing, like improvements to training and protocols, as well as how police officers respond to mental health distress calls.

United for All, a group made up of leaders across Ottawa working to address hate-based violence and extremism, said Ottawa has made "incremental progress" toward building a more inclusive community since Abdi's death.

United for All praised initiatives, like the creation of the city's Anti-Racism Secretariat, but called on Ottawa police to do more to build trust between police and racialized community members. 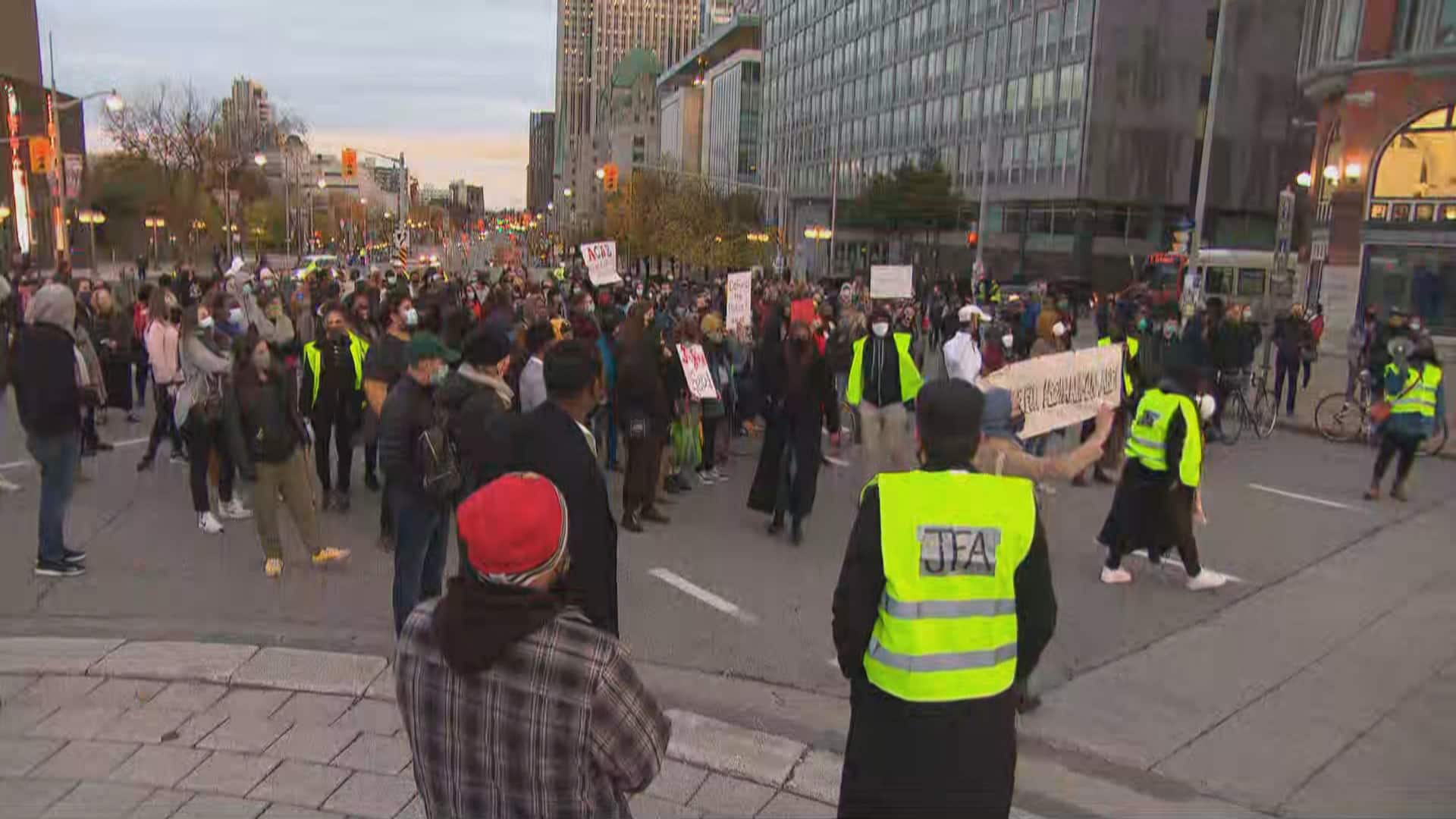 "We still have significant work to do," the group's statement said.

"Let us continue the work and find a way forward that sees us overcome racism and violence in Ottawa. Let's do this to honour the life of Abdirahman Abdi."