A national charity that tracks sexual abuse and exploitation of children has found the problem of teachers molesting students in Canada isn't going away.

A national charity that tracks sexual abuse and exploitation of children has found the problem of teachers molesting students in Canada isn't going away.

According to ongoing research by the Winnipeg-based Canadian Centre for Child Protection, there have been 108 alleged or confirmed reports of sexual abuse in schools in the past 17 months.

That's more than one new case every week, similar to the previous 20-year trend.

"If that's not telling that we still have a problem, I don't know what is, because that's hard-fact data," said Noni Classen, the centre's director of education.

Of the 108 most recent cases, tracked from Jan. 1, 2018, there have been 36 criminal convictions or disciplinary findings. Many of the remaining cases have yet to make their way through the courts.

Between 1997 and 2017, the centre counted nearly 1,300 alleged or confirmed cases of abuse by a school employee in Canada. Classen said the rate of false claims by students is very low.

Researchers collected the data by combing through court records, media reports and the provincial organizations that regulate teachers.

Classen said some people are surprised by the recent numbers.

"People did think this was in the past," she said. "It's someone who's misusing relationships with children, which is something that we're going to see in today's day and age as well."

Classen travels across Canada to work with schools and school boards to train teachers, union leaders and school administrators about what to watch out for, how to prevent abuse and how to intervene if there are suspicions abuse is happening.

"How do we build systems to safeguard children from sexual abuse happening by somebody who's working with a child in the school?" she asked.

In many cases, Classen said, the abuse occurs during extracurricular activities including school outings, sports tournaments or band trips. 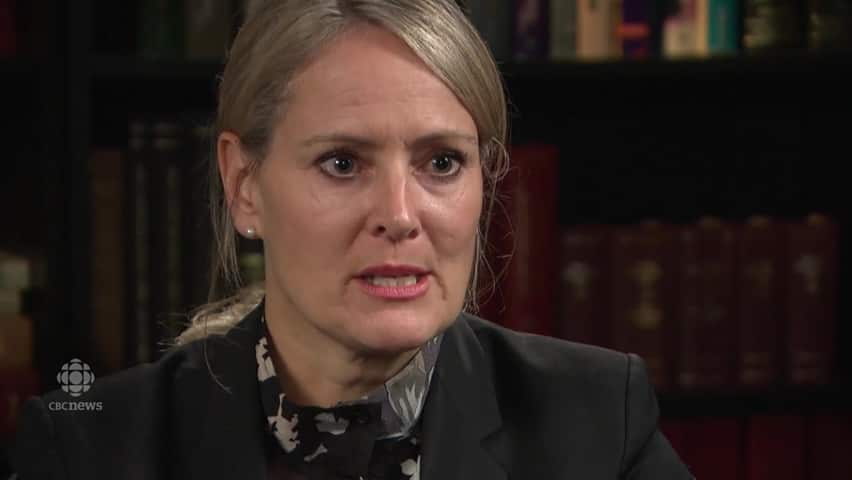 1 year agoVideo
1:31
Noni Classen, director of education for the Canadian Centre for Child Protection, says any actions taken against teachers in misconduct cases should be made public in order to keep children safe. 1:31

"If you're extending access with kids outside work duties or work hours, it needs to be authorized, transparent and accountable," Classen said.

Often, the lines are blurred.

Classen gives the example of a principal who volunteered as a girls' varsity volleyball coach and who, during practices, would run his fingers through the girls' hair and stroke their backs.

"That's a really good example of something that's not illegal, but it is a violation of boundaries," she said. "And so if it's just inappropriate, we need to correct it, because that's how we're going to disrupt potentially someone who is more egregious."

'It was really horrific'

Sometimes, there's no mistaking a teacher's behaviour for what it is: sexual abuse.

When Anna Côté was 13, her music teacher at J.H. Putman Public School in Ottawa sexually assaulted her over a period of six months.

In 2016, Phillip Nolan — who played drums in former prime minister Stephen Harper's band — was convicted, sent to prison and stripped of his teacher's certificate.

"It was a really horrific, challenging, confusing, isolating, traumatic experience," said Côté, now a lawyer in Toronto who asked the court to lift the publication ban on her name after Nolan's conviction.

Côté said she found out years after the abuse that other students knew about it or suspected it, that some had even warned Nolan to leave her alone.

"Apparently there was even a group of boys in our year who created a fake email address and they wrote to this teacher and they said, you know, 'Stop doing what you're doing with our girls,'" Côté recalled. "But if they felt that way, where were the adults?"

A recent CBC investigation shone light on historical sexual abuse by three teachers who, over the course of decades, preyed on students at the same Ottawa high school.

Since those cases were brought to light, the school board at the centre of the investigation has started working with Classen and the Canadian Centre for Child Protection.

"I think that we recognize that a healing process is required," said Camille Williams-Taylor, director of education for the Ottawa-Carleton District School Board (OCDSB).

Classen is helping the OCDSB come up with training, monitoring and communication protocols for principals, teachers and union leaders.

It's helping staff figure out what to do when they're presented with subtle signs that make them uncomfortable, Williams-Taylor said.

"It's those nuanced pieces that I think ... the centre has allowed us to engage in a conversation about in a way that allows us to do something."

Shelagh MacDonald, Anna Côté's mother, is aware of the OCDSB's efforts, but she's not convinced it will be enough.

"When Anna was sexually abused, I'm quite sure there were some policies and procedures in place, but they were not effective because no adult was paying attention," MacDonald said.