Three local choirs have joined forces for the Canadian premiere of Tyler's Suite, a nine-part choral work dedicated to Tyler Clementi, a talented teen who took his own life after being cyberbullied.

Mother of Tyler Clementi, who took his own life in 2010, to attend Canadian premiere

In a church basement in Alta Vista, three local choirs have been rehearsing together for the Canadian premiere of Tyler's Suite, a choral work dedicated to the memory of American teenager Tyler Clementi.

Clementi, a talented young violinist, took his own life in 2010 in a case that focused attention on anti-gay bullying, teen suicide and hate crime laws in the fast-changing Internet age.

The musical project that sprung from the tragedy has been three years in the making for Tone Cluster, Ottawa's self proclaimed "quite a queer choir."

On Saturday evening Tone Cluster will be joined by the Nepean High School Choir and Harmonia Choir for a performance at the Carleton Dominion-Chalmers Centre in downtown Ottawa.

Clementi's mother, Jane Clementi, will be in the audience.

"He was a loving, gentle soul that was really like the peacekeeper in our home," Clementi said of her son.

"He just had such a future, a bright future ahead of him that I just still shake my head. I can't fathom that he doesn't have it anymore."

Clementi, who had recently come out as gay to his parents, was in his first weeks at Rutgers University in New Jersey when his roommate hid a webcam in their dorm room and live-streamed a sexual encounter between the 18-year-old and another male student.

Clementi's subsequent death made international headlines and was the first case of cyberbullying to be brought before the U.S. courts.

It also galvanized a number of prominent American composers to create Tyler's Suite, a nine-part choral work with violin. 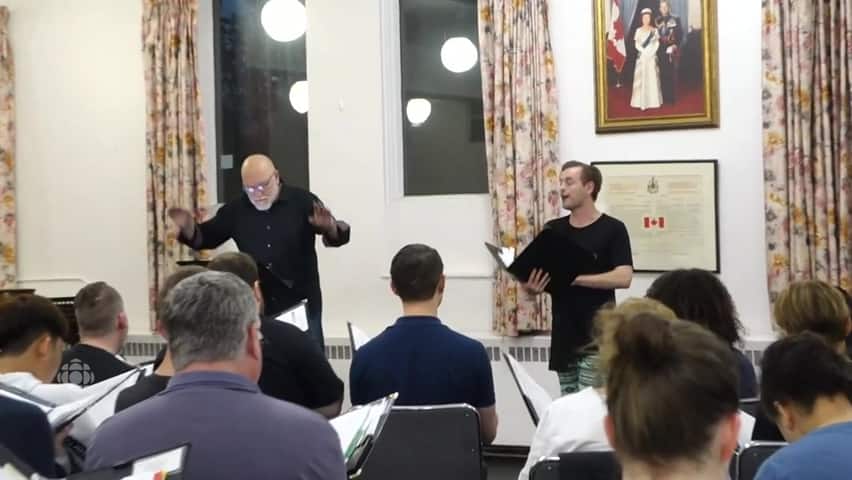 'It's colourful and it's bright and it's mournful'

1 year ago
0:57
Tim Seelig, artistic director of the San Francisco Gay Men's Chorus, says the performance will serve as a reminder to reach out to others. 0:57

Oscar-winner and Broadway legend Stephen Schwartz (Wicked, Godspell) enlisted fellow composers including Stephen Flaherty and Jake Heggie to each write a part. The libretto is based on hours of interviews with the Clementi family.

The San Francisco Gay Men's Chorus, under the direction of Tim Seelig, was the first group to perform Tyler's Suite.

Tone Cluster arranged for Seelig to fly to Ottawa to conduct the combined Canadian choirs.

Seelig said despite the tragic nature of the story, Tyler's Suite is "not depressing at all." In fact, the artistic director said the songs really reveal Clementi charming and creative character.

"He rode the unicycle while playing the violin. For real." Seelig said. "The whole thing ends with this really triumphant call to action: Don't leave someone behind. When you see someone in pain, say something."

Jane Clementi said she went to a very dark place after her son's death.

"It felt like a fog had descended on me, that I had broken into a million pieces," she recalled.

She found her way out of that grief and despair by leading a foundation in her son's name that fights cyberbullying. She calls Tyler's Suite a "miraculous gift" to both her family and the foundation, although she still becomes emotional when she listens to it.

"I think the music really reaches down into someone's soul and really can transform it," she said. "And that's our goal."