As part of CBC Ottawa's Cool with Cold series, meet a woman who's taking up a traditional winter game that blends history, culture and family fun. 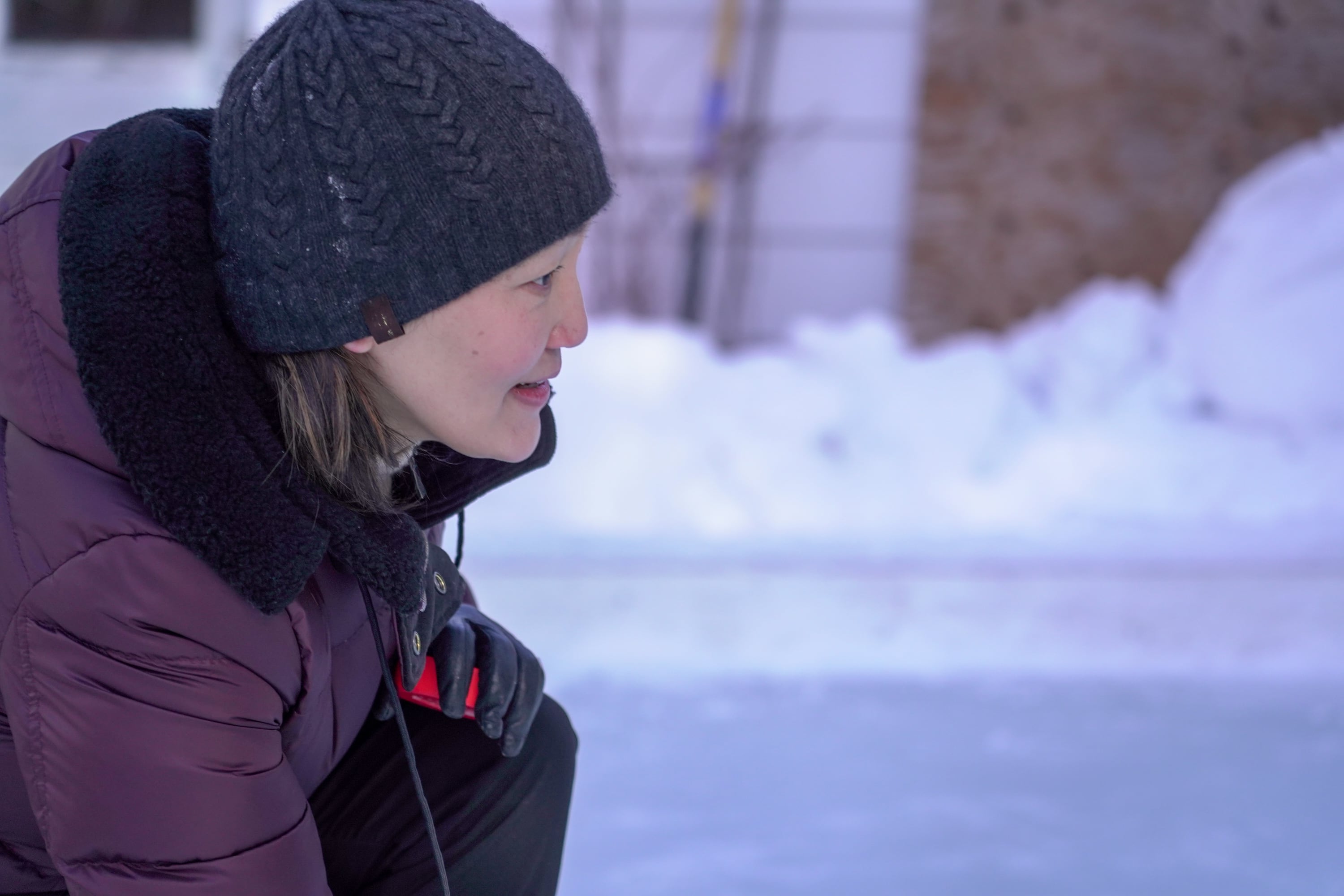 5 days ago
2:41
As part of our 'Cool with Cold' series, Zolzaya Sanjmyatav explains why during the pandemic her family is rediscovering an ancient game once banned in her country. 2:41

Winter is a difficult time for many, particularly during a pandemic. Cool with Cold is a CBC Ottawa series highlighting people who've found creative ways to embrace the season, safely.

Click here to meet a father teaching his son a traditional Inuit winter game, a woman teaching her kids to make a candy that's best enjoyed below freezing, or to discover why birding is better in winter.

Bundled up against the winter chill on a backyard rink, Zolzaya Sanjmyatav demonstrates the proper technique for throwing a zakh down the ice, just like her Mongolian ancestors did for centuries — only in this case, the zakh is a plastic hockey puck, an alteration she calls a "Canadian adjustment."

Sanjmyatav grew up in Mongolia's coldest city, Tosontsengel, in the northwest province of Zavkhan, where she played many of the same winter sports as Canadians.

"In Mongolia we do skating, skiing and sledding like in Canada. But one of the very unique sports that we play during the winter is knucklebone," said Sanjmyatav.

Sanjmyatav went online to study the rules so she could teach her children Sodbileg,13, Sainbileg, 10 and Uranbileg, 8, how to play.

Now, as a diplomat in charge of culture, sport and political affairs at the Embassy of Mongolia in Ottawa, she said she's excited to share the finer points of knucklebone with Canadians.

Rules of the game

Similar to curling, "knucklebone ice shooting" takes place on a sheet of ice, as its full name suggests. Players take turns sliding the zakh, traditionally made of metal or carved deer antler, toward targets set out 100 metres away, though the distance can be shortened depending on the length of the ice surface at hand.

The scoring system reflects the country's religious history. For every point earned, players draw one line of a temple on a sheet of paper. The first team to complete a temple wins.

"It's very much connected to our Buddhist religion," explained Sanjmyatav.

Sanjmyatav said after the Soviet Union established the Mongolian People's Republic, the game of knucklebone was outlawed.

"From 1924 to the 1990s, the socialist regime banned many cultural and religious activities," she said.

After the fall of the Soviet-backed government in 1990, there was a resurgence of Buddhism. Mongolians began reconnecting with their culture, including traditional games.

"It's like finding a treasure. We didn't know that this sport existed," said Sanjmyatav.

Now, the Mongolian Knucklebone Association is working to establish the game as an official winter sport in Mongolia, organizing annual championships across the country.

According to Mongolian historians, knucklebone was first documented in the 12th-century literary text The Secret History of the Mongols, an epic that chronicles the life of conqueror Genghis Khan. In the book, Khan plays knucklebone with his friend Jamukha on a frozen river.

Originally played to strengthen hunters' eyesight so they could spot animals from far away, the goal of the game changed in the 17th century when Buddhist monks took it up to improve their mental and physical health.

"The [monks] said that the air on the river is the purest, so it's one of the reasons they played," said Sanjmyatav.

Sanjmyatav said the game has taken on a new meaning for families whose usual winter activities have been curtailed by the COVID-19 pandemic, including her own.

"I was amazed at how well-structured and sophisticated this game was, that was invented hundreds of years ago. But it still has so many mental, social and physical benefits for the well-being of kids," she said.

And it's been a fun way to help her family rediscover their roots, too.

"I have this sense of responsibility to teach them their heritage cultures so they know who they are," Sanjmyatav said.