Dick Troy, the sibling of a Canadian navy pilot who disappeared off the coast of Florida in 1958, finally took home a small piece of his missing brother's belongings Friday, after they were found washed ashore during Hurricane Irma.

Lt. Barry Troy's Canadian navy jet was declared missing in fog in 1958, but his body was never found

Dick Troy, the sibling of a Canadian navy pilot who disappeared in 1958, finally took home a small piece of his brother's belongings Friday, after they were found washed ashore at a park in Florida during Hurricane Irma.

The small piece of Royal Canadian Navy Lt. Barry Troy's jet will be placed inside his parents' grave, which is marked by a tombstone bearing his name and the words "Lost at sea."

Family members traced their finger gently over the aged items at the Aviation and Space Museum in Ottawa Friday.

A black-and-white photo of Barry sat among his yellow parachute harness, life-jacket and oxygen bottle.

"My mom was crying for her baby boy, my mother was 57 years old, and my dad was trying to console her," Troy told CBC Radio's Ottawa Morning, recalling the day his parents received the tragic news.

"That [scene has been] stuck in my mind for a long time and nothing ever happened and we never really got much news. Years went by … mom and dad passed away and [they] never heard anything else."

Barry's jet disappeared off the coast of Florida in dense fog on Feb. 25, 1958. The 29-year-old New Brunswicker was presumed killed in a plane crash but neither his body nor the wreckage were ever found.

'It's an eerie feeling'

He was told that parts of a wrecked plane and a parachute harness with the words "Lt. (P) Troy" inscribed on it washed up on a beach in Jacksonville, Fla.

"I almost buckled my knees, I couldn't imagine what this was about," said Troy. "It's an eerie feeling."

Barry grew up in Chatham, N.B., and graduated from St. Francis Xavier University in Antigonish, N.S., before he joined the navy during the cold war. His mother was apprehensive about his decision.

"[He] was bigger than life," Troy recalled. "Barry was the oldest, and we looked up to him, he kind of led the way for us."

Barry was described by fellow officers as unwaveringly loyal, brave and well-liked by all those who knew him, Dr. Richard Mayne, senior historian for the Royal Canadian Air Force, told the ceremony attendees Friday.

When his plane crashed in 1958, the family was left with few answers, Troy said. 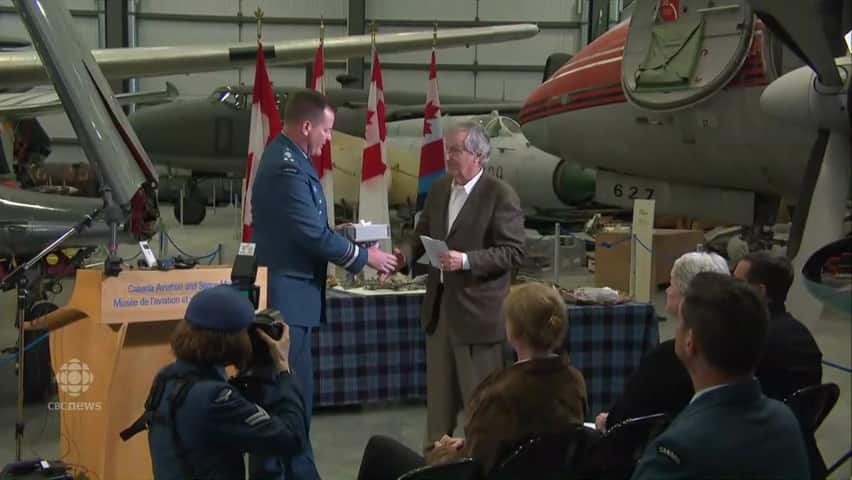 'My knees buckled:' Pilot's brother describes learning his sibling's belongings had been discovered

5 years ago
0:41
Dick Troy, brother of Lt. Barry Troy, took home a small piece of his lost brother's belongings Friday during a ceremony at the Aviation and Space Museum. 0:41

At first, the navy informed them that Barry was missing, but a newspaper article, two days later, said he was dead. The family never heard much else after.

At the ceremony, Troy and his sister learned a little more about what happened during the fatal accident when their brother's aircraft crashed into the ocean and disintegrated.

Troy touched his brother's items for the first time at an event on Feb. 26 in Jacksonville, which marked the return of the artifacts to Canada.

"The storm … revealed them," Troy said Friday. "That was kind of like a miracle in of itself … that it would turn up."

The family has agreed to lend most of the artifacts to the Shearwater Aviation Museum in Halifax, where Barry had been based.

Troy said he is pleased that his brother's items will be shared at the museum.

"They're going to honour Barry and so many others that have fallen," he said.

At Friday's ceremony, Troy was handed a white box, wrapped with a ribbon. Inside was the small piece of Barry's aircraft that will be buried with his parents.