Ontario Provincial Police divers have recovered a man's body from a car that crashed through the thin ice of Mississippi Lake on the weekend.

1 man taken to hospital, another dies after vehicle crashes through thin ice

Ontario Provincial Police divers have recovered a man's body from a car that crashed through the thin ice of Mississippi Lake on the weekend.

Members of the OPP's underwater search and recovery team entered the lake, about 70 kilometres southwest of downtown Ottawa, just before sunset on Sunday.

"They found the vehicle and recovered the body of a a 31-year-old man from Lanark County, Drummond North Elmsley Township," OPP Const. David Bird said.

The man's name was not released.

Around 3:45 a.m. Sunday, OPP received a report that a vehicle had crashed through the ice of the lake, just south of Carleton Place, Ont. 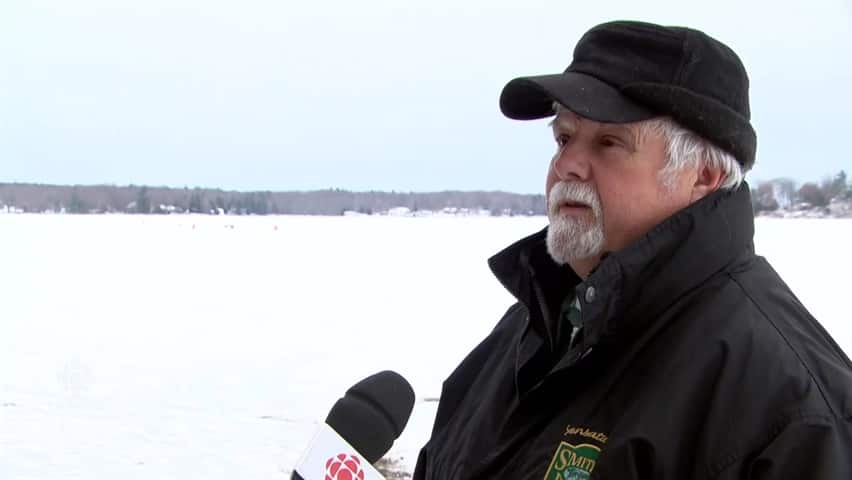 2 years agoVideo
0:39
Divers recovered a man's body after two vehicles went through the ice on Mississippi Lake over the weekend. Gerry Linton, a longtime resident of the area, said that spot is known to be dangerous. 0:39

One man who had managed to escape the vehicle and make it to shore was taken to hospital to be treated for hypothermia.

When police arrived at the scene of the incident, they found a partially submerged all-terrain vehicle with its lights on. While searching for the ATV's occupants, police discovered a second vehicle — a fully submerged Volkswagen sedan, the subject of the original call.

Bird said police don't believe there's a connection between the abandoned ATV and the submerged vehicle.

On Monday, the roof of the ATV could still be seen protruding from the ice. The area was marked off with orange caution cones.

Gerry Linton, who has lived on the lake for 40 years, said he heard sirens and saw flashing lights early Sunday morning as fire trucks sped to the boat launch near his driveway.

You stay the heck away because you know it's bad.- Gerry Linton, Mississippi Lake resident

"I said, 'Uh-oh, somebody went through the ice and hopefully they got out," Linton recalled.

He said about a year ago an ATV went through the ice at the same spot.

"There's a current there and it's wet there because the ice is thin," he said. "So you know it's soft and you stay the heck away because you know it's bad because there's not a lot of ice there."

On Monday, a caution light marked the spot where another vehicle's wheel had broken through the ice, not far from a cluster of ice fishing huts.

Fluctuating temperatures have made the ice especially dangerous, Linton said.

"Check the ice, drill to make sure there's enough ice,"  he advised. "Talk to the locals and make sure they can give you information about where to go and not to go."

Bird said it's common to see vehicles go through the ice of lakes in Lanark County, but fatalities are rare.

"The integrity of the ice can change, and it can change very swiftly," he said.