Dalton McGuinty's resignation as Premier of Ontario was a surprise to many of his constituents in Ottawa South. 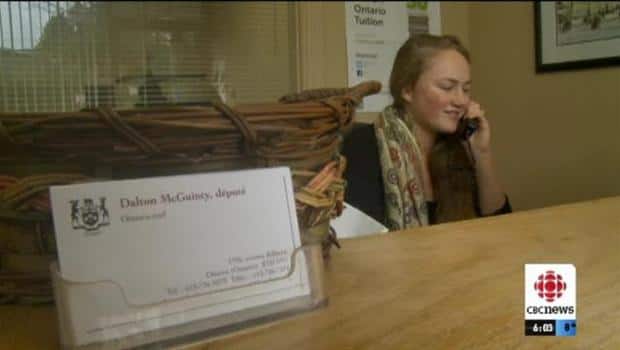 8 years ago
2:39
Dalton McGuinty's Ottawa South riding remains his responsibility, but not likely for long. 2:39

Dalton McGuinty's resignation as Premier of Ontario Monday was a surprise and a disappointment to many of his constituents in Ottawa South, a riding he has represented for more than two decades.

While McGuinty's popularity in province-wide polls has sunk in recent years and his party only managed to hang on with a minority government in the 2011 election, he hasn't had difficulty retaining his seat in Ottawa South, where he has never won less than 45 per cent of the popular vote.

McGuinty's father, Dalton McGuinty Sr., served one term as the riding's MPP before he died in 1990 after suffering a heart attack. Following in his father's footsteps, McGuinty won the seat in 1990 and has been re-elected five times.

"Yeah well, people like him," said Ottawa South resident Gilles Boucher. "If you keep doing your job and what people expect of you, then everything should go well. So it was quite a surprise that he did leave his post."

"He still has done a lot of good and I know that in this riding, honestly I can say that people would still vote for him," she said.

Longtime Ottawa politician Bob Chiarelli, current transport minister and MPP for Ottawa West-Nepean, said he's been approached to make a run at the leadership and has not ruled out the possibility.

"I've had some people that I respect very much suggest that I consider it but I haven't given an answer at this point in time," Chiarelli told CBC radio. "But I was kind of honoured and rather surprised that they suggested that."

Ottawa Mayor Jim Watson, a former Liberal Party cabinet minister under McGuinty, said he found out about the resignation on the social messaging service Twitter.

Watson, who has no plans to enter a contest to replace the outgoing Liberal leader, said McGuinty represented the City of Ottawa and all cities well during his time as premier.

"I think he can look back on his tenure with a great deal of satisfaction. He helped to improve wait times in health care and test scores in education, and certainly had a very positive productive relation with the municipal sector," said Watson.

As the McGuinty government geared up to extend wage freezes across the public sector, similar to the controversial Bill-115 that froze teachers' salaries for two years, the union representing Ontario public service workers said the premier's exit is good news.

"So my question to the premier, has he now recognized that his approach to labour and bargaining was ill conceived and didn't work very well for him and is he backing off?" said Smokey Thomas, president of the Ontario Public Service Employees Union.

McGuinty has said he prorogued Ontario's legislature so the government can focus on reaching agreements with its unions.

The MPP for Ottawa South said he would continue to represent his constituents until the next election and stay on as premier until a successor is chosen.