Three local activists are suing Mayor Jim Watson for blocking them on Twitter, arguing that by doing so, he is violating the Canadian Charter of Rights and Freedoms section on freedom of expression.

In what may be the first case of its kind in Canada, three local activists are suing Ottawa Mayor Jim Watson for blocking them on Twitter, arguing that by doing so he's violating their charter rights.

Watson was served with the suit on Tuesday night after the application was issued by the Ontario Superior Court, according to Paul Champ, the lawyer for the three applicants.

The three applicants are: 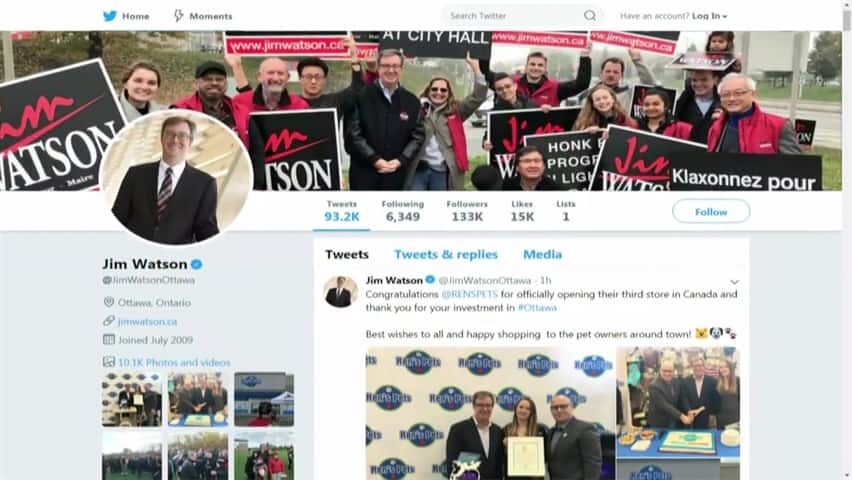 Why Ottawa's mayor is being sued for his Twitter use

2 years ago
1:01
Emilie Taman explains why she and two others are suing Ottawa Mayor Jim Watson for blocking people on Twitter. 1:01

The suit claims that by blocking them, Watson breached the Canadian Charter of Rights and Freedoms section on freedom of expression.

The mayor issued the following statement Wednesday afternoon: "This is my personal Twitter account. I have the right not to be attacked and harassed by the same individuals on a regular basis. I believe in civility in public discourse, and this type of behaviour would not be tolerated in a face-to-face debate. I look forward to dealing with this matter in due course."

I agree. She is simply using social media to run for office in the next federal election. I don't have to be subjected to her constant attacks on my integrity

Watson suggested last month that he blocked Taman because she is planning to run for office and was attacking his integrity.

But in an interview, Taman said that she didn't question his integrity, just his politics.

"I think the problem is that the mayor takes any kind of criticism as a personal attack," she said. According to Taman, Watson blocked her after a tweet in which she suggested he had a "right-wing agenda."

In the lawsuit, Hutt claims he was blocked after several tweets and re-tweets questioning why Watson was missing a debate on the environment and another on the gender issues.

Watson has come under fire on social media for blocking residents who are critical of him. By using Twitter's blocking option, not only does the mayor not see their tweets, but those he blocks can't see his messages either.

The mayor has said that @JimWatsonOttawa is his personal account, but he regularly uses it to communicate city news. For example, during last month's tornadoes, he tweeted information about power outages and other emergency information.

By blocking some residents, the lawsuit alleges, the mayor is denying them information and the "ability to engage in debate concerning municipal issues using Twitter," which the applicants argue is now a vital method of communication for public officials.

The applicants say they're fine with being "muted" by the mayor on Twitter, which means Watson would not see their tweets, but they would be able to read the mayor's Twitter feed.

The applicants argue that the charter section that protects freedom of expression "includes the derivative right to access government information where it is necessary for meaningful expression on the functioning of government and other matters of public concern."

In other words, by blocking them, the mayor is denying them their freedom of political expression, according to the lawsuit.

Although this may be the first case in Canada where a public official has been sued for blocking members of the public on Twitter, a similar lawsuit was brought against U.S. President Donald Trump. In May, a state district court found it was unconstitutional for Trump to block citizens on Twitter. The White House is appealing the decision.