Longtime Ottawa MP Mauril Bélanger, who died earlier this month after a battle with ALS, was laid to rest Saturday with Prime Minister Justin Trudeau, Ontario Premier Kathleen Wynne and former governor general Michaëlle Jean among the dignitaries in attendance.

Dignitaries, politicians of all stripes and public attend service in Ottawa for long-serving MP

Longtime Ottawa MP Mauril Bélanger, who died earlier this month after a battle with ALS, was laid to rest Saturday with Prime Minister Justin Trudeau, Ontario Premier Kathleen Wynne and former governor general Michaëlle Jean among the dignitaries in attendance.

Politicians of all stripes, including current and former cabinet ministers, colleagues, local constituents and family members, took part in a multi-denominational ceremony in Ottawa that included an honour guard and eulogies from the Trudeau, Jean and Bélanger family members.

Although not a state funeral, the guest list, along with the size and scope of the proceedings, resembled a state occasion.

Bélanger was diagnosed with ALS, or Lou Gehrig's disease, just after his party swept to power in the 2015 federal election. His condition deteriorated rapidly, although he continued to go to work at his office on Parliament Hill for as long as he could. He died on Aug. 15 at the age of 61.

"It's been quite a roller-coaster for the last year, as Mauril was very dedicated and wanted to work until the very end — which was very noble, of course, but given his health, it was a challenge," said a clearly emotional Alexandre Mattard-Michaud, Bélanger's former chief of staff ahead of the service.

"So I hope the ceremony will bring some sort of closure and that it will bring us all together one last time to celebrate Mauril." 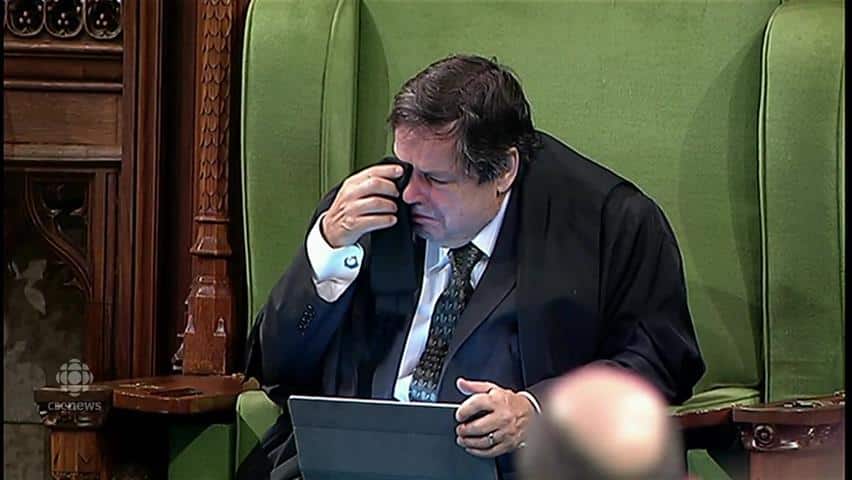 5 years ago
1:23
In a moving tribute, veteran MP Mauril Bélanger - recently diagnosed with ALS - presides over the House of Commons. 1:23

The funeral proceedings began at 9:50 a.m. ET at Notre-Dame Cathedral, when an honour guard in ceremonial dress and red serge took its place in front of the cathedral to welcome a procession of dignitaries including Wynne, Jean, former prime minister Joe Clark and parliamentarians past and present.

"Mauril was a great friend, a true friend, a great parliamentarian, someone who taught me and all of us so much about the importance of staying connected and in service of the folks who gave us their confidence and their trust to serve them well." said Trudeau, before entering the church with his wife, Sophie Grégoire Trudeau.

"My heart's broken for [his wife] Catherine, who loved him to an extraordinary degree, and all his family, and all of us who are less because Mauril is no longer challenging us and encouraging us," he said.

"I was just canvassing with Mauril about a year ago and he was so adored by the people of his riding, and it was an honour for me to be by his side," said Grégoire Trudeau. "He had some great lessons of integrity and humility and grace to teach every one of us, and I hold him dear to my heart."

In his eulogy, the prime minister said, even though Bélanger represented Ottawa-Vanier for 21 years as a Liberal, he refused to take election wins for granted.

"He worked tirelessly to attend the most events and to meet as many people as possible," he said, adding that Bélanger was "not trying to be at the forefront," but "chose to serve his community" through hard work.

The prime minister also praised Belanger, a Franco-Ontarian, for his defence of minority language rights and his devotion to his constituents.

Although Trudeau self-identifies as a Quebecer, he said Belanger never let him forget that he was born in Ottawa and was, therefore, technically a Franco-Ontarian as well.

"We'd joke about it but, you know, I never corrected him on that point because I know that for Mauril, for so many and yes, even for me, being a Franco-Ontarian was a source of tremendous identity and pride and there are few higher compliments from Mauril than to be included in those ranks."

In another eulogy, former governor general Jean said Bélanger "cared for justice, he cared for fairness," and was "an attentive listener to those who elected him and to those never voted for him."

The service ended on a happier note as mourners sang a gender-neutral rendition of O Canada.

Bélanger had championed a bill to change the English lyrics to the national anthem from "true patriot love in all thy sons command" to "in all of us command."

"I think what he did for us is really giving our national anthem that extra dimension that is very inclusive of all of us and for this we say thank you,"Jean said as she left the service at Ottawa's magnificent Notre-Dame Basilica.

"And we sang it with so much heart."

With files from Catharine Tunney and the Canadian Press